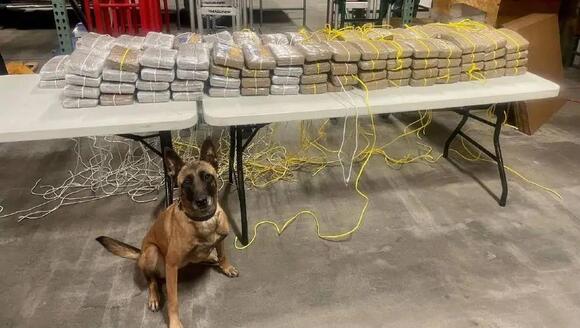 According to the Indianapolis Metropolitan Police Department, IMPD Interdiction Detectives received reliable information that a large amount of narcotics would pass through Marion County on Nov. 30.

Court docs: Woman tried to conceal heroin in her bra during traffic stop

Detectives located the truck on I-70 at mile marker 64 in Hendricks County and stopped it. IMPD narcotics K9 Mina made positive indication of drugs from the truck; officers interviewed the driver, identified as 50-year-old Mauro Alonzo-Vargas of Ennis, Texas.

Detectives obtained a search warrant; the subsequent search turned up about 130 kilos of cocaine (approximately 286 pounds) with an estimated street value of $13 million.

Police arrested Alonzo-Vargas, who was then booked into the Hendricks County Jail. He has been charged with dealing in cocaine, according to court records.

US 41 semi vs SUV crash kills 2 in Terre Haute

TERRE HAUTE, Ind. (WTWO/WAWV) — Two people have died as a result of a crash involving a semi-truck on US 41 in Terre Haute. According to the Vigo County Sheriff’s Office, the incident occurred at 2:29 p.m. on Thursday at the intersection of US 41 and Mayfair Drive. An SUV attempted to cross the northbound […]
TERRE HAUTE, IN・19 HOURS AGO
WEHT/WTVW

MARION, Ind. – A Marion man followed a woman and her daughter in a grocery store before trying to kidnap the little girl, police say. Marion police arrested Jason Milliner following the Jan. 30 incident, which happened around 1:30 p.m. at the Needler’s Fresh Market on Forest Avenue in Marion. The mother told police she […]
MARION, IN・13 HOURS AGO
WEHT/WTVW

LAFAYETTE, Ind. — A Purdue University professor was arrested after being accused of dealing meth and propositioning women for sexual favors. According to the Lafayette Police Department, Sergey Macheret, 65, of Lafayette was arrested on Wednesday after a lengthy investigation into reports of a “suspicious male approaching women.” Macheret faces charges of making an unlawful […]
LAFAYETTE, IN・1 DAY AGO
WEHT/WTVW

EVANSVILLE, Ind. (WEHT) — By the end of February, dozens of Railcrew Xpress employees across Indiana will be looking for a new job. Although the majority of these layoffs are outside southern Indiana, over 20 employees in Evansville will be out of work. Railcrew Xpress shifts part of the blame to CSX, as explained in […]
EVANSVILLE, IN・2 DAYS AGO
WEHT/WTVW

Sometimes it pays for diners to have an open mind. Restaurants that may not look like anything special on the outside may have some of the best food you have ever tasted behind its doors. Cheapism is putting these so-called “holes-in-the-wall” on a pedestal and highlighting the ones that they say has the best fried […]
INDIANA STATE・19 HOURS AGO
WEHT/WTVW

The folks at Social Catfish have compiled five area codes you should never answer a call from.
INDIANAPOLIS, IN・1 DAY AGO
WEHT/WTVW

HENDERSON, Ky (WEHT) – The Indiana Office of Utility Consumer Counselor (OUCC) is inviting written public comments regarding CenterPoint Energy’s request for approval of a build transfer agreement to operate a new wind generation facility. The OUCC is currently reviewing the utility’s request and is scheduled to file testimony on February 27. Consumer comments can […]
INDIANAPOLIS, IN・3 DAYS AGO
WEHT/WTVW

INDIANA (WEHT) – An Indiana University (IU) researcher has developed a new therapy for the treatment of ALS. IU researcher Chandler Walker, Ph.D., has developed a new stem cell-based secretome therapy. According to IU, secretome refers to the secretions of tissue or cells that can be harvested for therapeutic or other purposes. Officials say ALS is […]
BLOOMINGTON, IN・1 DAY AGO
WEHT/WTVW

WEST LAFAYETTE, Ind. (AP) — Zach Edey arrived on Purdue’s campus three years ago as an intriguing, inexperienced prospect. Today, college basketball’s biggest player also is its most immovable force. At 7-foot-4, 305 pounds and armed with a standing reach of 9 feet, 9 inches, Purdue’s starting center towers over essentially everyone and overpowers defenders […]
WEST LAFAYETTE, IN・1 DAY AGO