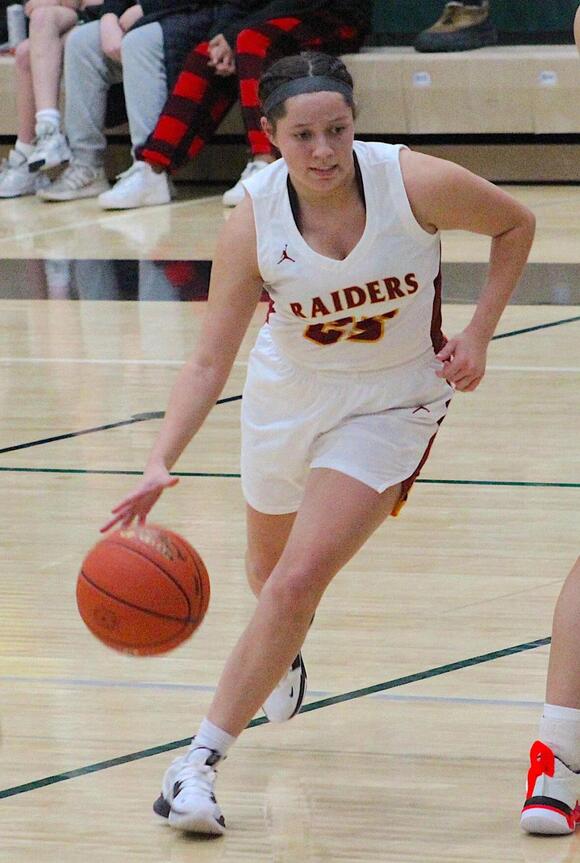 The Raiders were originally slated to open their season on Nov. 29 with a home game against Mankato West but weather conditions postponed that contest. Meanwhile, Faribault opened its season on Nov. 30 with a 49-38 victory at home against non-conference rival Pine Island.

As expected, Faribault used that game experience to gain an early lead in the game against Northfield. After exchanging points in the opening minutes of the first half, Faribault pushed its lead to 13-8 after a pair of treys from senior Isabel Herda and junior Hallie Rice. Herda then extended that lead by connecting on four free throws that gave the Falcons a 17-8 lead at 3:40 of the first period.

That nine-point margin proved to be the largest of the night for either team as Northfield slowly got back into the swing of things and tied the game at 17-17 with a field goal by ninth grader Amber Mahal. To complete the first half, Herda added two more free throws to give Faribault a 19-17 lead going into the break.

“It was a very slow start, we’re trying to figure out who’s who and what’s what in a new season with a new team, and a lot of young players who were getting their first real key varsity experience,” Northfield head coach Paul Eddy said. “We were sluggish in the first half and we asked them at halftime to get up on their toes, anticipate and play with some confidence and I thought in the second half we did a lot better job of that.”

The pace of the contest slowly started to turn in the second half. Faribault took advantage of two more three-pointers from Herda along with treys from Hailey Reuvers and Rice to take a 33-26 lead at 10:35 of the second half.

Northfield responded with inspired play from ninth grader Tatum Sawyer, who cut the lead to 33-28 after a driving lay-up off the break. A pair of free throws by senior Ryann Eddy pulled Northfield with two points at 33-31 and another driving lay-up by senior Izzy Balvin tied the contest at 33-33 with 5:27 on the clock.

Reuvers stepped up behind the arc to hit another trey for Faribault, which pushed the score to 36-33 in favor of the Falcons at the 5:00 mark.

Balvin then provided the assist on Mahal’s basketball for Northfield that tied the contest at 37-37 and a following free throw by Ryann Eddy gave the Raiders their first lead of the game at 38-37 with 3:29 left in the second half.

Faribault rallied one more time on a pair of free throws by Reuvers to take a 39-38 lead but a three-point field goal by Mahal returned the lead to the Raiders with 2:04 left in the game - a lead that Northfield would not give up again. In the closing minutes of play, Sawyer connected on a field goal and three free throws to help ice the contest for the Raiders.

On the night, Mahal led the offense for Northfield with 12 points, while Sawyer and Ryann Eddy each had 11 points. Balvin also had six points in the contest for the Raiders. Herda led the Falcons with 14 points. Reuvers had 11 points and Rice had nine points in the game for Faribault.

“Isabelle Herda has been a consistent scorer for us and Hailey Reuvers has stepped her game up and has been shooting the ball well for us. We’ve had players step up all around and I’m proud of the whole group,” said first-year Faribault head coach Bill Bardal.

He added his insight into the impact of playing games on consecutive nights against Pine Island and Northfield.

“Our girls played so hard tonight..we played back to back games and I could see our legs were going away a little bit and in the last 10 minutes we were just getting tired. We played pretty gutty the last two nights, so I’m really proud of this group and what they’ve done. These girls are listening everyday in practice and they are so receptive…we are going to keep getting better if they keep doing what they’re doing.”

Northfield’s coach Paul Eddy was pleased with his squad’s ability to battle back and get the win after a slow start at Faribault.

“I thought we steadied ourselves much better in the second half on both ends. I felt we did a fair job on the boards and I thought in the second half, especially down the stretch, they (Faribault) didn’t get too many second shots.”

“They packed it into the lane and clogged everything up on us, so we had to be patient because we weren’t able to effectively get the ball into the paint. I thought what helped us in the second half is that we were able to push it a little bit in the transition game. We were able to get into the paint before they got everybody there to plug things up and that was big when Tatum Sawyer had a couple good takes to the basket,” Eddy said.

Despite her status as a ninth grader, Eddy was impressed with the play of Sawyer during the Faribault game.

“She didn’t start the game tonight but she finished and she finished because she was doing good things,” Eddy said of Sawyer.