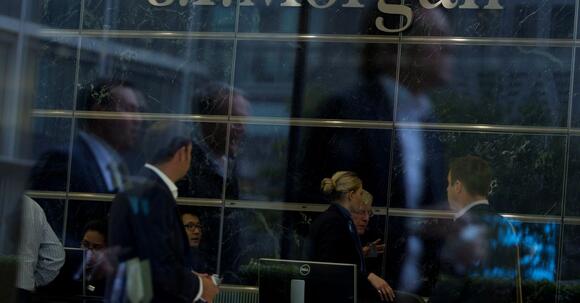 NEW YORK, Dec 6 (Reuters) - The biggest U.S. banks are bracing for a worsening economy next year as inflation threatens consumer demand, according to executives Tuesday.

JPMorgan Chase & Co (JPM.N) Chief Executive Jamie Dimon told CNBC that consumers and companies are in good shape, but noted that may not last much longer as the economy slows down and inflation erodes consumer spending power.

"Those things might very well derail the economy and cause this mild to hard recession that people are worried about," he said.

Consumers have $1.5 trillion in excess savings from pandemic stimulus programs, but it may run out some time in mid-2023, he told CNBC. Dimon also said the Federal Reserve may pause for three to six months after raising benchmark interest rates to 5%, but that may "not be sufficient" to curb high inflation.

The U.S. central bank last month raised rates by 75 basis points during its fourth consecutive meeting to 3.75%-4%, but it also signaled hopes to shift to smaller hikes as soon at its next meeting.

Major banks' shares fell sharply on the day after a lineup of top bankers outlined the risks for the economy. Bank of America slid more than 4%; Goldman Sachs Group Inc (GS.N) and Morgan Stanley (MS.N) each fell more than 2% and Citigroup Inc (C.N) slid more than 1%.

Bank of America CEO Brian Moynihan told investors at a Goldman Sachs financial conference that the bank's research shows "negative growth" in the first part of 2023, but the contraction will be "mild."

The lender's investment-banking fees will probably decline 55% to 60% in the fourth quarter from a year earlier, while trading revenue will likely rise 10% to 15%, Moynihan said.

"Economic growth is slowing," Goldman Sachs CEO David Solomon said at the same conference. "When I talk to our clients, they sound extremely cautious."

In banking, the job market remains "surprisingly tight" and competition for talent is "as tough as ever," he said.

However, some banks are cutting staff. Morgan Stanley has reduced about 2% of its workforce, a source familiar with the company's plans said on Tuesday. The job cuts, first reported by CNBC, affect about 1,600 positions and follow workforce reductions at Goldman and Citigroup. read more

"We're trying to be a little more prudent," he said.

Well I have been in a recession. Where is the rest of America? Those food prices are outrages. And other necessities too. Basic home needs. Shame on this administration for inciting a war, and being so socialist

The next stage of this Biden inflation cycle is called wage push inflation and with that comes the following unemployment, stagnation, higher taxes, failing city and state budgets, reduced production, inflation first in sectors than thru the entire economy.

It's already been here. The rich just have to catch up to the poor to make it official that "we are in a recession" now and they decide they don't want to play with all their money any longer.

Jan 31 (Reuters) - European shares dropped on Tuesday as investors feared another round of interest rate hikes by major central banks this week, while shares of Italian bank UniCredit jumped after a profit beat.
1 HOUR AGO
Reuters

NEW YORK, Jan 31 (Reuters) - Recession worries are sending investors into Treasuries and other fixed income investments ahead of the Federal Reserve's first meeting of 2023, even as stocks start the year with a hopeful rally.
4 HOURS AGO
Reuters

ROME, Jan 31 (Reuters) - Italy's economy shrank by 0.1% in the fourth quarter of last year from the previous three months, preliminary data showed on Tuesday, a slightly smaller contraction than expected but still raising fears of recession.
1 HOUR AGO
Reuters

LONDON, Jan 31 (Reuters) - The British public's predictions for inflation cooled again in January, according to a survey on Tuesday that should further comfort the Bank of England that high prices will not become permanently embedded in expectations.
2 HOURS AGO
C. Heslop

Inflation has reduced the value of social security benefits to recipients. But there will be further cuts in the long run. Experts say the increasing needs of seniors are burdening small benefit reserves. Americans are living longer because of lower lifestyle risks. Life expectancy was 47 years in 1900 and it was 76 in 2021.
16 HOURS AGO
msn.com

The global oil market remains tight according to Saudi Aramco, the largest oil producer in the world. And that does not bode well for a world that still relies heavily on fossil fuels. Disclaimer: We adhere to strict standards of editorial integrity to help you make decisions with confidence. All...
2 DAYS AGO
Eden Reports

In a recent speech, President Joe Biden stated that he had added more to the national debt of the United States than any other president in history, saying, "No President added more to the debt in 4 years than my President… I misspoke - 25% of our country’s entire debt."
1 DAY AGO
Reuters

BEIJING, Jan 31 (Reuters) - China is seriously concerned about a report that the United States has stopped approving licences for U.S. companies to export items to tech giant Huawei, a foreign minsitry spokesperson said on Tuesday.
3 HOURS AGO
Reuters

Paxlovid sales forecasts may change with Pfizer view on China

Jan 30 (Reuters) - Clarity from Pfizer Inc (PFE.N) this week on whether China's relaxation of its Zero-COVID policy and the surge in infections there will lead to a spike in demand for its antiviral Paxlovid could spur analysts to alter their 2023 sales forecasts for the treatment.
22 HOURS AGO
Reuters

SEOUL, Jan 31 (Reuters) - Most Bank of Korea board members at a Jan. 13 meeting turned cautious about interest rates rises, even though a majority voted for one on that day, meeting minutes showed on Tuesday.
3 HOURS AGO
Reuters

Jan 31 (Reuters) - Sri Lanka's key inflation rate eased to 54.2% in January from 57.2% in December, the country's statistics department said on Tuesday. The Colombo Consumer Price Index (LKCCPI=ECI) (CCPI) reflected a 60.1% jump in food prices from a year earlier and a 51% climb in the non-food group, the Census and Statistics Department said in a statement.
1 HOUR AGO
Reuters

LISBON, Jan 31 (Reuters) - Portugal's economy grew 6.7% in 2022, its strongest rate in 35 years, boosted by domestic demand and booming tourism, but inflation hampered demand in the last quarter in a foretaste of an expected steep slowdown this year.
1 HOUR AGO
Reuters

Marketmind: 'Soft landing' or 'no landing'?

A look at the day ahead in U.S. and global markets from Mike Dolan. There's an uncomfortable feeling in markets this week that good news may be bad news once again - mainly because of what the former means for this week's big central banking set pieces.
20 MINUTES AGO
Reuters

Goldilocks is back! Markets start 2023 in red-hot form

LONDON, Jan 31 (Reuters) - From stocks to government bonds, markets have had one of their best starts to the year in decades but whether the run lasts depends on a Goldilocks scenario of inflation easing, economic growth holding up and borrowing costs falling.
4 HOURS AGO
Reuters