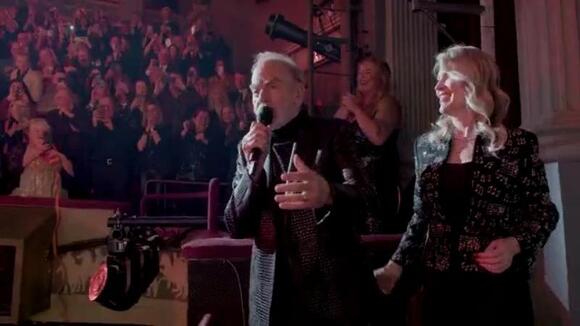 Above video comes courtesy of “A BEAUTIFUL NOISE ON BROADWAY” via FOX NewsEdge.

(WGHP) — Theatergoers got an unexpected, once-in-a-lifetime show from legendary singer-songwriter Neil Diamond on the opening night of the new Broadway musical “A Beautiful Noise.”

The musical, which opened at the Broadhurst Theatre on Sunday, tells the story of Neil Diamond from growing up in Brooklyn through his rise to fame.

The show stars actors Will Swenson and Mark Jacoby as Diamond “then” and “now,” but, the audience, to their shock, also got a performance from the 81-year-old legend himself.

According to People, Diamond offered an impromptu performance of “Sweet Caroline” during the curtain call in what was his first hometown performance since 2017.

A video shared by the musical’s official Instagram shows the view from the floor. As the music to “Sweet Caroline” began, the crowd was looking to the stage and humming along. Diamond, standing at his box seat, then begins singing the lyrics. In a wave of surprise, heads in the audience turn to Diamond. The singer, the cast and the audience sing together before closing out with raucous applause.

Diamond announced his retirement from concert touring in 2018 following his Parkinson’s diagnosis, making his appearance all the more special.

“I plan to remain active in writing, recording and other projects for a long time to come,” Diamond said in a statement announcing his touring retirement . “My thanks goes out to my loyal and devoted audiences around the world. You will always have my appreciation for your support and encouragement. This ride has been ‘so good, so good, so good’ thanks to you.”

EAST ROCKINGHAM, N.C. (QUEEN CITY NEWS) — A newborn baby was found dead next to railroad tracks in East Rockingham Thursday afternoon, according to the Richmond County Sheriff’s Office. Authorities said a call came in around 2 p.m. from a person who stated they had found a baby next to the train tracks between South […]
RICHMOND COUNTY, NC・2 DAYS AGO
FOX8 News

WINSTON-SALEM, N.C. (WGHP) — The Winston-Salem Police Department is investigating a drive-by shooting that occurred on the highway Saturday morning. At around 12:58 a.m. on Saturday, officers responded to a reported shooting on US 421 Northbound. At the scene, police found the victim in his vehicle on the off-ramp of US 421 Northbound near Jonestown […]
WINSTON-SALEM, NC・1 DAY AGO
FOX8 News

GREENSBORO, N.C. (WGHP) — A community is seeking answers after an 8-year-old girl was shot while sleeping in her bunk bed in Greensboro. On Thursday, the victim’s family, via Greensboro police and Guilford County Crime Stoppers, released the name and a photo of the young victim as investigators continued searching for the culprit or culprits […]
GREENSBORO, NC・2 DAYS AGO
FOX8 News

RALEIGH, N.C. (WGHP) – On the first day bills could be filed in this session of the North Carolina General Assembly, two senators and a House member from the Piedmont Triad seized the moment to help offer significant legislation. State Sen. Paul Lowe (D-Winston-Salem) is a principal sponsor of a bipartisan bill that was the […]
NORTH CAROLINA STATE・3 DAYS AGO
FOX8 News

Two conjoined twin girls who shared a liver were successfully separated Monday in a Texas hospital.
FORT WORTH, TX・2 DAYS AGO
FOX8 News

Videos showing the violent arrest of 29-year-old Tyre Nichols, a Memphis man who died 3 days after he was beaten by police in a traffic stop Jan. 7, has been released by Memphis officials.
MEMPHIS, TN・1 DAY AGO
FOX8 News

Video of the traffic stop that preceded Nichols’ death will be publicly released after 6 p.m. (CT). MEMPHIS, Tenn. — The attorneys and family of Tyre Nichols asked for justice for their son, and peace in their city, at a press conference in Memphis on Friday. Speakers included family members, attorneys Ben Crump and Antonio […]
MEMPHIS, TN・2 DAYS AGO
FOX8 News

Fatal crash on I-85 Northbound, Greensboro Urban Loop shut down highway after truck’s back wheels came off, police say

GREENSBORO, N.C. (WGHP) — Interstate 85 North on the Greensboro Urban Loop was shut down due to a fatal crash Thursday, according to the Greensboro Police Department. The crash happened at Mile Marker 126 near Exit 126 for US 421 around 11 a.m., and emergency services workers did confirm one person, later identified as Leon […]
GREENSBORO, NC・3 DAYS AGO
FOX8 News

Car pinned under big rig, dragged for miles along interstate

Police say a semitrailer dragged a Kia compact car roughly 8 miles along an interstate in Kansas after the car was trapped under the truck Wednesday morning.
LEAWOOD, KS・3 DAYS AGO
FOX8 News

Memphis police chief is Durham’s former police chief: What Durham city leaders said about her impact on use of force numbers

GREENSBORO, N.C. (WGHP) — The Greensboro Police Department is investigating a shooting that left one person dead and another person seriously injured on Saturday. Officers came to the 2800 block of Pinecroft Road in Greensboro after getting a report of a shooting. Police at the scene found two gunshot victims suffering from “serious injuries.” Both […]
GREENSBORO, NC・1 DAY AGO
FOX8 News

T.J. Holmes and Amy Robach, anchors at the afternoon extension of ABC's “Good Morning America,” are leaving the network after their romance was reported in November.
NEW YORK STATE・2 HOURS AGO