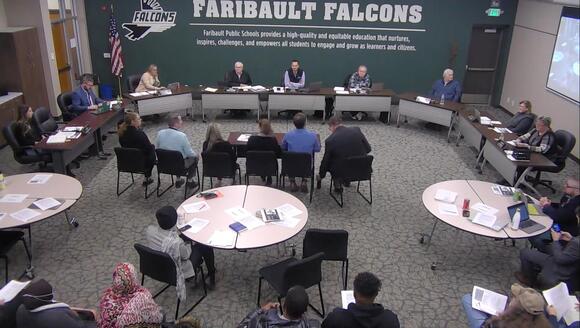 At a raucous final meeting of 2022, Faribault’s School Board pleased an overflow crowd by voting 5-1 to approve a $1.1 million state grant designed to address substance abuse among students of color.

Tuesday’s meeting received attention from activists and media outlets across the state and nation after Board Chair Chad Wolff decided that the board would revisit the grant application after deadlocking 2-2 on the issue at its Nov. 21 meeting. Board members LeeAnn Lechtenberg and Richard Olson opposed the Minnesota Department of Health grant arguing that the grant’s state-proscribed mission of helping students of color was discriminatory because white students were not included.

Superintendent Jamie Bente pushed back hard against the premise that the grant would “only” benefit students of color, instead predicting a “trickle out” effect that would reduce addiction and improve lives for all students.

The discussion took place as the district prepares to implement painful budget cuts to balance its books after the failure of two levy referendums. Wolff said that without the grant, it’s hard to envision that the cash-strapped district could find the resources for additional support services.

The grant is expected to fund a full-time project coordinator focused on developing and implementing strategies to reduce and prevent alcohol, tobacco and drug addiction among students of color. Working alongside the coordinator will be a part-time media consultant and a part-time youth coordinator. Six local organizations will receive grants to help coordinate outreach to specific cultural and ethnic communities, and funding would be provided for parent and staff surveys and associated consulting services.

Faribault Public Schools applied for the grant alongside the Rice County Chemical and Mental Health Coalition, a partnership of more than 15 local health care institutions, schools and government focused on reducing substance abuse.

Faribault Public Schools Mental Health Coordinator Janet Lewis Muth said district staff were on the lookout for ways to expand mental health and substance abuse treatment after several Somali families came to a board meeting in the summer to express concerns about how the District was serving their children. Bente, Student Success Coordinator Katie Schultz, and several members of the board held follow-up meetings with the Somali families to discuss their concerns. In those meetings, the families expressed particular concern about substance abuse and mental health issues.

Lewis Muth credited Faribault Public Schools Community Education and Engagement Director Zach Pruitt for finding the grant opportunity. DHS announced that it would offer Faribault the opportunity to be one of just four communities served by the grant.

Lewis Muth said that the resources offered under the program would offer a natural complement to the programming the district already offers. The district currently has two full time chemical health specialists on staff.

“Many of the students who (our chemical and mental health specialists) meet with are self-identified. They decide that they’d like to meet with a chemical health specialist,” Lewis Muth said. “Some of them are referred by teachers and staff who recognize that they might be experiencing a problem. And some of them do get in trouble and are referred because they have an issue that is a chemical health violation.”

Lewis Muth said the grant would supplement existing services. Much of the focus would be on promoting positive community norms, pushing back on the notions of some students that the use of illicit substances is “cool” or popular.

“When young people in our community believe that their peers are drinking on the weekend or using drugs, that can influence their behavior,” she said. “The vast majority of our students are not engaging in substance use behavior and we want all students to hear that so they can act based on a true understanding of norms.”

Lewis Muth pledged the district would focus heavily on outreach to students, families and community organizations. By listening to more perspectives, she said that program coordinators could better tailor their approach to meet the community’s needs.

The grant became a controversial issue for activists and families, especially those in the local Somali community. About a half-dozen speakers addressed the topic in open comment at Monday’s meeting.

Martha Brown, a substitute teacher in the district, said accepting the grant should be a “no-brainer.”

“None of us want to have to tell our struggling, hurting students, especially our Black, brown and Indigenous students, that there was no help for them because a bunch of white school board members didn’t think that they were deserving,” she said. “If you truly believe these students don’t deserve the help… then I ask you to resign from this School Board because people who don’t care enough about young people of color should never be in a position to make policy that negatively impacts their lives.”

The Council on American Islamic Relations, Minnesota Chapter became involved, asking its members across the state and even the country to lobby board members to vote in favor of accepting the grant.

Board members reported they received somewhere from 900 to 1,000 emails on the topic, the majority of them a template coordinated by the Council on American Islamic Relations. The organization’s Executive Director Jaylani Hussein spoke at the meeting, noting the large racial achievement gaps seen in Minnesota. In Faribault specifically, he said student achievement among students of color remains dire.

“I not only urge you to vote for this, but I’m also concerned as we move forward that you are not keying in on the interest of making sure that all of your students are being successful,” he said. “You have a 50% graduation rate for Black students in four years.”

Olson and Lechtenberg took exception to the harsh tone of some emails, including some accusing them of bigotry. Lechtenberg called for people from all viewpoints to be more willing to listen to alternative perspectives and to turn down the increasingly harsh tone of debate.

“I would like to remind people that the reason why I opposed that grant wasn’t because I opposed helping the BIPOC population. I wanted to be sure that all parts of our population that need that help would receive it,” Lechtenberg said. “For that I have been been called a white supremacist, an oppressor, a white woman using whiteness to oppress the already oppressed.”

Yet even after enduring harsh accusations, Lechtenberg, who was attending her last meeting as a board member after failing to secure reelection last month, expressed gratitude that discussion of the issue had enabled her to have insightful conversations around substance abuse and mental health treatment.

While she heard feedback from staff at Allina Health as well as the Faribault Police Department and a variety of community organizations, Lecthenberg said she was most moved by an email she received from a community member who had has struggled with substance abuse.

“(They) thought that with this grant, there might be another way to get more help for all of our students,” she said. “If this grant brings more treatment options, that is always a good thing.”

Moved by this feedback, Lechtenberg switched her vote to support the grant. Board members Jerry Robicheau and Courtney Cavallier, whose absence at last month’s meeting had left the grant without the votes to pass, also spoke passionately in favor.

Robicheau was disappointed in the board’s failure to accept the grant at its November meeting, describing the decision as “unconscionable.” He argued the grant’s targeted nature is needed to help address decades of underinvestment in students of color and the alarming achievement gap.

“This is intended to provide services to a segment of our population that has been denied equitable services for decades,” he said. “There is a history of providing grant funding to address such inequities.”

Robicheau echoed Bente’s comments about the broader impact, describing the expected effects of investment in students of color as a “ripple effect” that would benefit the student body and community at large.

Cavallier, who will also be leaving the board after failing to secure reelection last month, argued that denying the grant to help address substance abuse because it was intended to help students of color would actually be racist. She said that as about 60% of the district’s student body is composed of students of color, the grant is badly needed. Overall, she expressed a desire for the district to do more to help students struggling to focus because of other challenges.

Despite the intense lobbying campaign, Olson stood his ground and voted again against accepting the grant. He accused activists of “harassment” in their lobbying, and reiterated his belief that the grant should be rejected because it does not benefit all students.

“I like the grant because it helps students, but I’ll say again it does not help all students,” he said. “Everybody needs help — white, black, brown.”

Olson was the lone member of the board who ultimately voted against the grant. It passed 5-1 with board member Casie Steeves again absent.

Wolff asked the audience to increase their involvement in Faribault Public Schools.

“I believe that the conversation and discussion that came out of this can be a real springboard for us and for our community,” he said. “With that, I would ask all of you to become more involved than you already are… We face many different challenges, as all of you know, whether it’s with this grant, whether it’s school violence, whether it’s bullying, and we can make a difference if we all come together.”