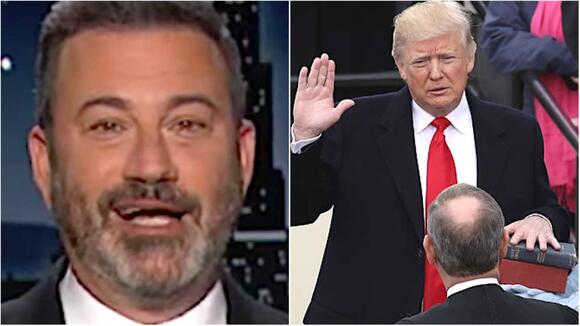 Jimmy Kimmel on Monday mocked Donald Trump for his weekend cry to terminate parts of the Constitution and showed why Americans should have seen this coming. (Watch the video below.)

“When he put his tiny little hand on the Bible, he took an oath to defend the Constitution,” the “Jimmy Kimmel Live” host said, referring to the former president’s 2017 inauguration. Kimmel then displayed a photo of the oath he alleged that Trump used:

“I do solemnly swear that I will faithfully execute the vice president of the United States,” Kimmel read. “Whoa — maybe he had a different idea.”

That part with the cross-out actually reads “ faithfully execute the office of president of the United States, ” but Kimmel’s comic reimagining doesn’t seem so crazy now, does it?

Just wait until you see the new “Don-stitution”:

Everyone should have known trump was in bed with china when he paid more taxes to them then he did the united States. Everyone knows Kim his thumbs girlfriend. Remember the letter he bragged about that Kim wrote him? Then dumb an dummer admit that he got money from Putin because the united States would not lone him any money. Yeah he's a real stable genius

isn't trump trying to get parts of the constitution removed right now? or did I read the headline wrong or too quick when I skimmed by the article the other day. kind of contradicts this photo if that is what he's trying to do. I could be wrong

It’s hard to believe that Walker has any chance at all at a US Senate seat. What is wrong with republicans that they would even vote for anyone who is obviously not senate material? IMO, Georgia is smarter than that. Warnock is going to win.

The Colorado Republican appeared to forget who was president in 2020.
11 HOURS AGO
HuffPost

Rep. Kevin McCarthy decided not to stand up and applaud as President Joe Biden talked about the United States overcoming the Jan. 6 attack on the Capitol.
1 DAY AGO
HuffPost

There's one line her critics agreed with — but probably not in the way she was hoping.
ARKANSAS STATE・1 DAY AGO
HuffPost

15 Of Sarah Huckabee Sanders' Most Egregious Lies And Outrageous Remarks

The Arkansas governor, who's admitted under oath to lying to the press, will deliver the GOP's response to Biden's State of the Union address this week.
ARKANSAS STATE・2 DAYS AGO
Business Insider

DeSantis says he won't fight with Trump over Truth Social photos with high schoolers: 'I don't spend my time trying to smear other Republicans'

"I spend my time delivering results for the people of Florida and fighting against Joe Biden," DeSantis said during a press conference on Wednesday.
FLORIDA STATE・19 HOURS AGO
SheKnows

If you purchase an independently reviewed product or service through a link on our website, SheKnows may receive an affiliate commission. You probably haven’t heard the name Stormy Daniels for a while, but that $130,000 hush payment Donald Trump made to the adult-film actress in 2016 is still haunting him. The Manhattan District Attorney’s office believes that the money was a violation of “election and business-records laws,” so they are pondering felony charges.  According to Rolling Stone sources, the former president’s lawyers already have a legal strategy to try and squirm out of the possible charges. They are trying to get him...
1 DAY AGO
The List

President Joe Biden's second State of the Union address since taking office saw the commander-in-chief rallying ordinary Americans and his fellow politicians alike to work together to get the country back on its feet (via The Guardian). Following years of turmoil, thanks to the COVID-19 pandemic and widespread economic disparity, which led to a more divided citizenry than ever before, Biden took an optimistic approach to moving forward.
1 DAY AGO
Washington Examiner

The Chinese balloon story is even bigger than it seems

THE CHINESE BALLOON STORY IS EVEN BIGGER THAN IT SEEMS. The Chinese spy balloon matter has become far more serious in recent hours — and it was serious enough to begin with. Of course, there are lots of questions in the aftermath of the U.S. Air Force shootdown of the balloon off the coast of South Carolina on Saturday. Questions such as what, specifically, was it spying on? What information had it gathered? When was the United States aware of its existence? Will experts be able to secure enough of the wreckage from the ocean floor to answer those and other questions?
MONTANA STATE・2 DAYS AGO
HuffPost

Kevin McCarthy Didn't Stand When Biden Referred To Jan. 6 In State Of The Union Speech

Early in his address, Biden summed up the troubles he faced when he entered office two years ago, making a nod to the Jan. 6, 2021, insurrection at the Capitol.
FLORIDA STATE・1 DAY AGO
HuffPost

If You’re Still MAGA, You’re Everything People Say You Are, How About Just Making America Great? (Opinion)

People who wave the Confederate flag may say it’s about heritage, not hate. They may have convinced themselves that’s the only way it should be interpreted. But in their hearts, they know how it’s being received no matter what they say they mean. When people say you’re purveyors of hate, that’s what you are and what you meant to do.
1 DAY AGO
The Independent

Taylor Swift’s reaction to Jill Biden at the Grammy Awards has gone viral, with fans claiming that the singer looked “unhappy” to see the first lady.Biden made an appearance at Sunday’s music event to present two major awards: Best Song for Social Change and Song of the Year. In a viral video of the ceremony on Twitter, Grammys host Trevor Noah introduced the 71-year-old, who walked on stage before the camera panned to the audience. Along with the rest of the guests, Swift stood up and clapped for Biden. However, the “Anti-Hero” singer also looked down at the floor...
1 DAY AGO
HuffPost

The longtime Democratic operative told MSNBC's Ari Melber "the level of white trashdom in the Republican Party is staggering."
3 HOURS AGO
HuffPost

Most networks didn't air it, but the president stuck around for a while cracking up Supreme Court justices, telling stories and giving people comfort.
KENTUCKY STATE・15 HOURS AGO
HuffPost

Chinese Balloon Flew Over Florida When Trump Was President: CNN

A Pentagon report said a Chinese balloon hovered above a location Trump knows all too well when he was in charge, the news network reported.
FLORIDA STATE・1 DAY AGO