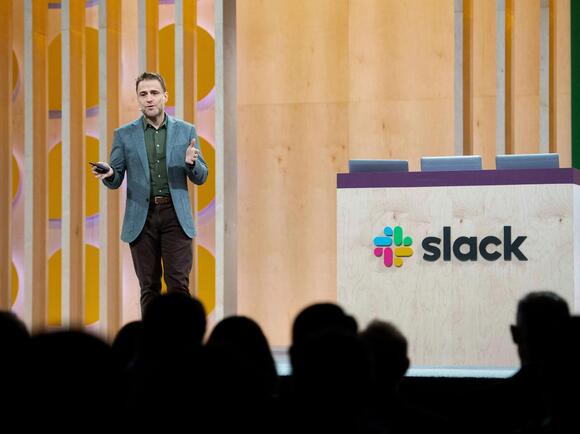 Hello, tech readers. Quick question: Have you gone "goblin mode" yet this year?

Maybe you have — even if you didn't realize it. Goblin mode, which was crowned Oxford English Dictionary's 2022 word of the year , means being unapologetically self-indulgent or lazy, "typically in a way that rejects social norms or expectations."

I've got more on goblin mode below, but first, let's talk about Salesforce, which is seeing more executive departures this week.

2. Elon Musk gambled big on Twitter. Tesla is going to pay the price. Vicki Bryan, founder of a bond research firm, writes that she's never seen new management blow up a company as fast as Musk is destroying Twitter — and that he might have to raid Tesla to keep his new purchase afloat . Meanwhile, the company's former C-suite is set to receive $200 million in combined stock payouts after getting fired by Musk, if he abides by their contracts .

3. "Metaverse" lost the word of the year contest to "goblin mode." Oxford Languages, the publisher of Oxford English Dictionary, named "goblin mode" the 2022 Word of the Year — beating out semifinalist "metaverse." A look at what "goblin mode" means.

4. Inside the stunning unraveling of Bright Health. The health-insurance upstart went public in 2021 at a dizzying $11.2 billion valuation. But now, the company has taken a hatchet to most of its business as it works to stave off a collapse, and experts and insiders are blaming Bright's pursuit of rapid growth for its undoing. Read the full story.

5. Want an extra $2 per month? That's what Amazon is offering some customers who let it monitor the traffic on their phones. Under the company's new invite-only Ad Verification program, Amazon is tracking what ads participants saw, where they saw them, and when they were viewed. The program could raise privacy concerns over how Amazon handles customer data — see what we know so far .

6. Shopify told employees not to engage with tweets about its business ties with Libs of TikTok. A leaked memo shows that so many people have contacted Shopify about its hosting the controversial store that the e-commerce company issued specific guidance to customer-support representatives about how they should handle inquiries about the topic. What we learned from the leaked memo.

8. The EU hosted a party in its $400,000 metaverse, but pretty much no one showed up. One journalist who attended the 24-hour launch party said he was one of just six people at the event. More on the event here.

9. These are the best tech gifts for everyone on your list. We've been searching for the gifts people actually want, and have compiled a list of gifts you can get right now. From portable speakers to action cameras, here are our 33 top picks .

10. What is ChatGPT? The tool, which has reached over one million users in five days, is a new artificial intelligence chatbot that answers questions in a conversational, human-like way. See what the hype is about.

Mark Zuckerberg reportedly said managers should not be rewarded for creating larger teams, according to Command Line.
2 DAYS AGO
Business Insider

Amid an onslaught of tech layoffs, here are 12 major tech companies that haven't announced any job cuts in the past 6 months

It may seem like every well-known tech company has had layoffs in the last few months, but there are still some holdouts, including Apple and Nvidia.
21 HOURS AGO
Business Insider

Yes, the viral AI chatbot sweeping the internet can churn out a tortured and formulaic letter to cut employees just as well as any tech CEO.
21 HOURS AGO
Business Insider

From Jeff Bezos to Jack Dorsey, here are 14 the world's wealthiest entrepreneurs trying to crack the code of living forever

Insider rounded up 14 of the world's wealthiest entrepreneurs searching for a solution to the predicament of mortality.
20 HOURS AGO
Business Insider

I'm an HR executive that was just laid off from Vox Media. I've been preparing for this since my first day on the job.

It doesn't matter how good you are or how hard you work, there's no such thing as job security at for-profit companies.
VIRGINIA STATE・2 DAYS AGO
Business Insider

A Google engineer says survivors of the mass layoffs cried in meetings the day around 12,000 of their colleagues were culled

Another engineer told Insider the layoffs meant Google was "just another big company" and the things that made it feel special were "gone."
2 DAYS AGO
Business Insider

Ashish Kalsi wrote on LinkedIn he has a two-year-old daughter and was working at Google on an immigrant visa: "The dreaded H-1B countdown has begun."
3 DAYS AGO
Business Insider

I was working toward a promotion at Amazon when my manager started emailing me about needing coaching. Now I'm worried about losing my job.

Amazon told a manager that they could earn a promotion. Now they suspect Amazon put them on a performance-improvement plan — and is pushing them out.
18 HOURS AGO
Business Insider

Bed Bath & Beyond's founders admit their biggest mistake: 'We missed the boat on the internet'

The founders of embattled Bed Bath & Beyond, Warren Eisenberg and Leonard Feinstein, told the Wall Street Journal they didn't adapt to e-commerce.
2 DAYS AGO
Business Insider

Paul Baker, a video producer, told Insider he was partway through a month of paid carers' leave when his termination email arrived.
2 DAYS AGO
Business Insider

A laid-off Googler says colleagues should 'find perspective' about the recent layoffs: 'No one died. Seriously'

"I see a lot of 'deeply saddened' and all that stuff," former Googler Mallika Iyer wrote in a LinkedIn post, adding: "No one died. Seriously."
21 HOURS AGO
Business Insider

How 5 major streaming services are cracking down (or not) on password sharing, from Netflix to Hulu

As Netflix prepares to charge for account sharing early this spring, other streaming services have been slower to take a stance on password swapping.
1 DAY AGO
Business Insider

In a new Dell survey of 15,000 Gen Z, 29% of respondents said remote work is important, but another 29% said they favor 9-to-5 office-based roles.
2 HOURS AGO
Business Insider

I moved to New York from the UK to marry my partner using a K-1 visa. The process was so difficult that we had to sue the government.

Dan Gooding met his now-husband in Spain. They decided to marry to be together. The immigration process stalled their plans for over 18 months.
NEW YORK CITY, NY・1 DAY AGO
Business Insider

In Insider Weekly: Wall Street's most powerful man, Ken Griffin of Citadel, on why he moved to Miami. Plus, why first-time homebuyers are screwed.
UTAH STATE・20 HOURS AGO
Business Insider

Realtors are using AI to help write property listings and pen emails. Some experts say the tech is on its way to becoming standard in the industry.
IOWA STATE・16 HOURS AGO
Business Insider

I asked ChatGPT for online and in-person dating advice, here's what relationship coaches think of its answers

The coaches thought some advice from ChatGPT, such as how to tell your partner you love them, was good, but they still think their jobs are.
22 HOURS AGO
Business Insider

The Google data used is based on searches that ask how to pursue a career path as a way to only include those who are dreaming of a certain job.
1 DAY AGO