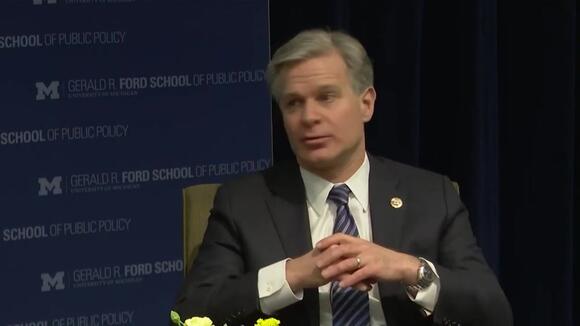 A new warning from the director of the FBI suggests that people using TikTok in the United States might want to consider a new favorite social media app.

The Associated Press reports that Director Christopher Wray told an audience at the University of Michigan that the app is "in the hands of a government that doesn’t share our values, and that has a mission that’s very much at odds with what’s in the best interests of the United States."

"That should concern us," he added.

Wray said the FBI was particularly worried about the fact that the Chinese government has the ability to control the app’s recommendation algorithm, “which allows them to manipulate content, and if they want to, to use it for influence operations.”

The Associated Press wire services contributed to this report.

ADL report on antisemitic attitudes in the US finds troubling results

The report, entitled “Antisemitic Attitudes in America: Topline Findings,” can be found on the ADL website.
5 HOURS AGO
News 12

The Dutchess County Drug Task Force says investigators executed a search warrant at the home of James Jenkins, 39, on Virgina Avenue Friday, and took him into custody.
POUGHKEEPSIE, NY・1 DAY AGO
News 12

Former President Donald Trump appears to have lied in sworn court records, opening him up to severe sanctions by a New York judge who has already lost his patience and threatened to punish him before.Trump claimed he wasn’t the president of the Trump Organization during his four years at the White House, despite previously testifying that he was an “inactive president.” And he claimed that he didn’t have a financial stake in a partnership with the real estate company Vornado, even though he previously testified that he did.On Tuesday, the New York Attorney General’s Office asked Justice Arthur F. Engoron...
NEW YORK CITY, NY・4 HOURS AGO
Eden Reports

On Sunday, Maria Bartiromo reported during a Fox News Sunday Morning Futures segment that there are 1,850 boxes filled with classified documents that President Joe Biden donated to his home state's university.
NEWARK, DE・1 DAY AGO
Newsweek

The video sparked discussions on social media about what kind of weapon could be responsible for the attack.
4 HOURS AGO
The Hill

There has been substantial media coverage of President Biden and former Vice President Pence both removing marked classified documents outside the White House after they left the vice presidency (and, in the case of Biden, also including after he was a U.S. senator). Both insist they did so inadvertently.   Of course, the word “inadvertent” does not apply to former President Trump’s behavior. As we now know from Mr. Trump’s own admission, he knew documents he took to Mar-a-Lago were classified…
WASHINGTON STATE・1 DAY AGO
Newsweek

This help line is a growing effort to give Ukraine vital advice on repairs and maintenance as it pushes weapons to their limits.
WASHINGTON STATE・1 DAY AGO
Newsweek

The GOP lawmaker recently urged Democrats to join Republicans in a newly formed subcommittee tasked to investigate the "weaponization" of the federal agencies.
OHIO STATE・2 DAYS AGO
News 12

According to police, Juan Hernandez and Manuel Martinez-Quintanilla were both found to have drugs while inside the store.
AMITYVILLE, NY・1 DAY AGO
News 12

The city began busing migrants to this facility over the weekend, and the mayor's office claims the facility can hold up to 1,000 asylum seekers.
BROOKLYN, NY・22 HOURS AGO
Reuters

LONDON, Jan 30 (Reuters) - Russia told the United States on Monday that the last remaining pillar of bilateral nuclear arms control could expire in 2026 without a replacement due to what it said were U.S. efforts to inflict "strategic defeat" on Moscow in Ukraine.
WASHINGTON STATE・1 DAY AGO
News 12

According to officials, the whale is an adult male about 30 to 35 feet long.
HEMPSTEAD, NY・22 HOURS AGO
msn.com

Three months after it got wrecked trying and failing to punch through Ukrainian defenses, the Russian navy’s unhappiest marine brigade is back in action. And apparently getting beaten, again. The bewildering and tragic plight of the 155th Marine Brigade is a reminder of one of the fundamental flaws in...
20 HOURS AGO
News 12

Operators of the 200-year-old Ruffin Cemetery in Tinton Falls saw few burials in recent decades but have now begun burying the remains of hundreds of people in graves marked by little more than small plastic signs. The cemetery's operator says they have every legal right to do what they're doing...
TINTON FALLS, NJ・17 HOURS AGO
News 12

Police say Sargunvir Sondhi was driving a Mercedes Benz eastbound around 5 a.m. when he smashed the back of a Nissan Sentra near Exit 51, causing the Mercedes to flip over.
DIX HILLS, NY・3 DAYS AGO
News 12

Police say Kyle Gritser was waving the weapon from his car and "menaced" four men in another vehicle.
HICKSVILLE, NY・19 HOURS AGO
News 12

Medical personnel went to Tariq Watson's side right away as players were ushered off the court. News 12 was told that Watson lost consciousness for a few minutes.
ROSELLE, NJ・1 DAY AGO
News 12

The Yonkers Fire Department received the call just before 1:30 a.m. after firefighters noticed flames coming from one of the building's windows.
YONKERS, NY・2 DAYS AGO