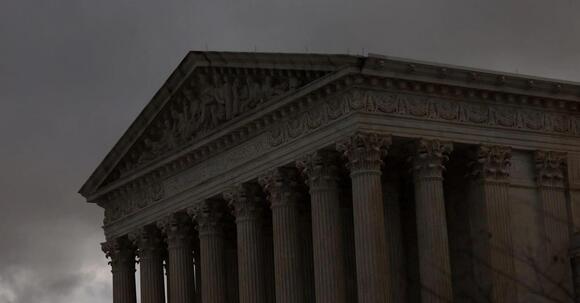 Kavanaugh's words, along with those of some of his fellow conservative justices criticizing state courts in other election-related disputes, foreshadowed a major case set to be argued on Wednesday that could hand politicians more power over the conduct of elections and limit the ability of state courts to scrutinize these actions.

The Supreme Court, which has a 6-3 conservative majority, is due to hear an appeal of a February decision by North Carolina's top court to throw out a map delineating the state's 14 U.S. House of Representatives districts - approved by the Republican-controlled state legislature - as biased against Democratic voters.

The Republican North Carolina lawmakers making the appeal are asking the Supreme Court to embrace a legal theory - once marginal but now gaining traction in conservative legal circles - called the "independent state legislature" doctrine, or ISL. Under this doctrine, they contend that the U.S. Constitution gives state legislatures, and not other entities such as state courts, power over election rules and electoral district maps.

North Carolina's Department of Justice and several voting rights groups that sued to block the Republican-drawn map are now defending the actions of the state's high court. They are backed by Democratic President Joe Biden's administration.

Critics have said any Supreme Court endorsement of the doctrine could upend American democratic norms by restricting a crucial check on partisan political power and breed voter confusion with rules that vary between state and federal contests.

"The current version of 'ISL' was dreamed up by conservative ideologues who don't want voters to have more rights and therefore have been eroding voting rights across the board," said Marc Elias, a prominent election lawyer who has represented the Democratic Party in numerous court cases.

"It's a mission by conservative academics and others to undermine the ability to protect regular citizens' rights to vote," Elias added.

The doctrine is based in part on language in the Constitution that the "times, places and manner" of federal elections "shall be prescribed in each state by the legislature thereof."

The Republican lawmakers have argued that the state court unconstitutionally usurped the North Carolina General Assembly's authority to regulate federal elections. Conservative voter advocacy groups backing them have said state legislatures must defend against what they see as increasingly brazen attempts to rewrite election laws through the courts.

The case has come to the Supreme Court at a time of heightened concern over U.S. election integrity in light of new voting restrictions pursued by Republican state legislatures in the aftermath of Republican former President Donald Trump's false claims that the 2020 election was stolen from him through widespread voting fraud. Republicans have said their aim is to prevent voting fraud.

The doctrine could endanger hundreds, even thousands, of election-related provisions in state constitutions, rules adopted by state elections officials and reforms adopted through voter referendums, according to New York University School of Law's Brennan Center for Justice.

Some legal experts have said the doctrine could make it easier for a state legislature's majority party to draw the boundaries of U.S. congressional districts to entrench its own power, a practice called gerrymandering. It could stymie challenges on issues as varied as voter-identification requirements, mail-in ballots and drop boxes, which Republicans have sought to restrict in some states and could factor into lawsuits that arise in the heat of an election, they added.

John Eastman, a conservative lawyer who advised Trump in his bid to overturn the 2020 election results, wrote a brief telling the Supreme Court that the doctrine also gives legislatures "plenary" power to choose presidential electors in the state-by-state Electoral College system that determines the winner of U.S. presidential races.

Veteran Republican election lawyer Benjamin Ginsberg said in a brief to the Supreme Court that the doctrine could "increase the odds that state legislatures replace the popular vote with their own political preferences." Ginsberg is among some conservatives who have decried the doctrine.

Jason Snead, a conservative elections expert who embraces the doctrine, said the North Carolina case gives the Supreme Court an opportunity to "shut down a lot of the confusion and chaos" occurring around elections.

"Courts have inserted themselves into the process of crafting election law, and doing so by pulling vague provisions from state constitutions," said Snead, who heads the Honest Elections Project, a group that sometimes opposes bids for more expansive voting rules favored by liberal organizations and Democrats.

Snead, conservative scholars and others reject the view that the doctrine would give politicians unbridled power or cause chaos because the actions of legislatures remain constrained by provisions of the U.S. Constitution and federal law.

The doctrine appears to have receptive audience in some of the Supreme Court's conservative justices.

When the court in March declined to block lower court rulings adopting an electoral map replacing the Republican-drafted one in North Carolina, Justice Samuel Alito dissented alongside Justices Clarence Thomas and Neil Gorsuch. Alito emphasized that the Constitution specifies that election rules are to be prescribed by legislatures, adding "we must take that language seriously."

Two groups of plaintiffs, including Democratic voters and an environmental group, sued claiming the map violated state constitutional provisions concerning free elections and freedom of assembly, among others.

The North Carolina Supreme Court struck down the map on Feb. 4, finding the districts were crafted to dilute the "fundamental right to equal voting power" of Democrats. A lower state court then rejected a redrawn map by Republican lawmakers and adopted one devised by a bipartisan group of experts.

The Supreme Court's ruling is due by the end of June.

if this court does this and there is nothing that reviews these Republican held house and senates who are gerrymandering and taking away voting rights we will end up with someone like Trump for president and every state run by Republicans taking away our rights. there has to be oversight

The Minority Party trying to be the Majority voice with their vague interpretation of long ago written words that were just fine until the Grand Ole Party realized they were in the Minority of the American populous, of a nation of 360 million beings the Republican party has fallen to about 25% of the voting electorate thanks to Drumpf and MAGA, they are no longer the Conservitive Party, the fiscal hawks, it's moved far right with one exception, them old repub dinosaurs in the Senate, America got fed up real quick with MAGA, just look at the midterms, no 40 seat majority which was once the norm for midterms, so now repubs in state houses want control of National elections, now the question is will those 6 SCOTUS seats give it to them!

So, why hasn’t the Democratic supermajority in ILLinois been restricted? They have gerrymandered the state for years giving them more federal legislature seats.

WASHINGTON, Jan 31 (Reuters) - President Joe Biden will release his proposed budget on March 9, the White House said on Tuesday, setting a deadline before his meeting with the Republican House speaker on Wednesday to discuss the nation's spending.
WASHINGTON STATE・17 HOURS AGO
Reuters

WASHINGTON, Jan 30 (Reuters) - The Republican head of a key U.S. House of Representatives committee said on Monday that he will pursue bipartisan legislation to better ensure the proper handling of classified documents at the White House when administrations leave office.
INDIANA STATE・1 DAY AGO
The Hill

There has been substantial media coverage of President Biden and former Vice President Pence both removing marked classified documents outside the White House after they left the vice presidency (and, in the case of Biden, also including after he was a U.S. senator). Both insist they did so inadvertently.   Of course, the word “inadvertent” does not apply to former President Trump’s behavior. As we now know from Mr. Trump’s own admission, he knew documents he took to Mar-a-Lago were classified…
WASHINGTON STATE・1 DAY AGO
Matthew C. Woodruff

Almost 30,000 people have signed a petition calling for evangelical pastor Franklin Graham to be fired for his support of former President Trump following the deadly Capitol riot. The petition was drawn up by the Christian organization Faith America, which criticizes Graham’s “idolatry” of the former president.
2 DAYS AGO
TheDailyBeast

MAGA-boosting radio host John Fredericks has turned on Donald Trump, telling the former president in no uncertain terms on Tuesday that “nobody cares” about his petty media feuds and “grievances” anymore.Fredericks, a longtime supporter of the twice-impeached ex-president, largely took issue with how Trump has seemingly ignored political issues while focusing his attention on far-fetched lawsuits and complaints about “fake news.” Additionally, Fredericks grumbled about Trump privately backing Ronna McDaniel in her successful re-election bid for Republican National Committee chair.“President Trump is going to do what he wants,” Fredericks declared in a clip first flagged by Raw Story. “I think...
15 HOURS AGO
Reuters

LONDON, Jan 30 (Reuters) - Russia told the United States on Monday that the last remaining pillar of bilateral nuclear arms control could expire in 2026 without a replacement due to what it said were U.S. efforts to inflict "strategic defeat" on Moscow in Ukraine.
WASHINGTON STATE・2 DAYS AGO
Newsweek

"There is no other way to talk to these fools," State Duma member and former military commander Andrey Gurulyov said.
1 DAY AGO
Reuters

WASHINGTON, Jan 30 (Reuters) - Former Brazil President Jair Bolsonaro has applied for a six-month tourist visa to remain in the United States, his lawyer said on Monday, despite calls for any U.S. visas held by Bolsonaro to be revoked following violent protests in Brasilia.
FLORIDA STATE・1 DAY AGO
Reuters

NEW YORK, Jan 31 (Reuters) - New York's attorney general on Tuesday asked a judge to sanction former U.S. President Donald Trump, his adult children, the Trump Organization and their lawyers over their responses to her $250 million civil fraud lawsuit against them.
FLORIDA STATE・9 HOURS AGO
Reuters

Jan 31 (Reuters) - Israeli Prime Minister Benjamin Netanyahu said on Tuesday he would be willing to consider serving as a mediator between Russia and Ukraine if asked by both warring countries and the United States.
WASHINGTON STATE・9 HOURS AGO
Reuters

Jan 30 (Reuters) - Texas Attorney General Ken Paxton must face an ethics lawsuit by state attorney regulators over a case he brought challenging results of the 2020 election, according to a court ruling posted on Monday.
TEXAS STATE・1 DAY AGO
Reuters

GENEVA, Feb 1 (Reuters) - Several Indonesian residents have submitted a legal complaint to a Swiss court against the world's top cement-maker Holcim, which they claim is doing "too little" to cut carbon emissions, a statement by civil society groups backing the complainants showed on Tuesday.
2 HOURS AGO
Reuters

WASHINGTON, Jan 31 (Reuters) - The White House on Tuesday expressed outrage on Tuesday at Exxon Mobil Corp's record net profit in 2022 of $56 billion, a historical high not just for the company but for the entire Western oil industry.
WASHINGTON STATE・12 HOURS AGO
Reuters

MEXICO CITY, Jan 31 (Reuters) - The Inter-American Commission on Human Rights (IACHR) on Wednesday called for countries in the Americas to reinforce protections for women and girls seeking abortions, after observing measures that "go backwards" last year.
9 HOURS AGO
Reuters

WASHINGTON, Jan 31 (Reuters) - The U.S. government on May 11 will end the COVID-19 Public Health Emergency (PHE) that allowed millions of Americans to receive vaccines, tests, and treatments at no cost during the pandemic.
WASHINGTON STATE・10 HOURS AGO