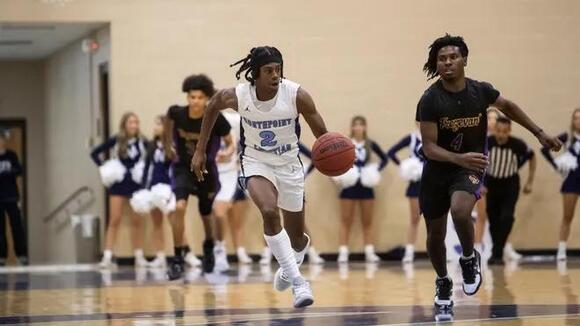 The Battle in the Bluff High School Showcase is back in Memphis for the third year.

It’s become an annual showcase, put on by the Iverson Roundball Classic, and hosted by Stephen Jackson. It’s a three-day showcase that highlights the talent pool both locally in Memphis and nationally.

Just like in year’s past, this year’s showcase will bring tons of highly ranked and recruited players to Memphis for three days of elite basketball.

The showcase will be hosted at Bartlett High School between Dec. 8-10th. Here are some players to watch ahead of this year’s Battle in the Bluff.

IVERSON CLASSIC:Why the Iverson Classic can be a permanent all-star basketball event in Memphis

MID-SOUTH BASKETBALL CLASSIC:Bronny James made his first appearance in Memphis. What if it's not his last? | Giannotto

Tayshawn Briggs, Dynamic Prep: Briggs is a 4-star prospect and the No. 3 player in Texas for the class of 2024. He has offers from Florida State, Maryland, Auburn, Texas Tech and others.

Alijah Curry, Memphis East: Curry is a 3-star forward and the No. 3 player in Tennessee in the class of 2024. His offers include, Memphis, Mississippi State, Ole Miss, Missouri and Radford.

Trentyn Flowers, Combine Academy: Flowers, a 5-star class of 2024 prospect, is the No. 22 player in the nation. He has offers from several schools, including Memphis, Alabama, Kansas, North Carolina and Tennessee.

Jarred Hall, Lebanon: Hall is a 3-star prospect and No. 4 player in Tennessee. The Class of 2023 prospect is committed to Tulsa.

Jimma James, Huntington Prep: James is a 3-star prospect and the No. 2 player in West Virginia. He currently has offers from Austin Peay and Washington State.

AJ Johnson, Southern California Academy: Johnson, a 6-foot-5 guard, is the No. 15 player in the 2023 class. He is signed to Texas.

Makhi Johnson, Huntington Prep: Johnson is a 3-star prospect in the class of 2023 and the No. 1 player in West Virginia. He has offers from several schools, including Auburn, Kansas and Maryland.

Jaye Nash, Briarcrest: Nash, a 3-star guard and No. 2 player in Tennessee for the class of 2024, has several offers , including Memphis, Alabama, Ole Miss, LSU, Arizona State and others.

Rakease Passmore, Combine Academy: Passmore is a 4-star prospect in the class of 2024. He has several offers, including Auburn, Kansas, Memphis and Tennessee.

Matt Reed, iSchool of Lewisville: Reed is a 6-8 center in the class of 2023 and 4-star prospect. He has offers from several schools, including TCU, Missouri, Georgetown and Loyola (Chicago).