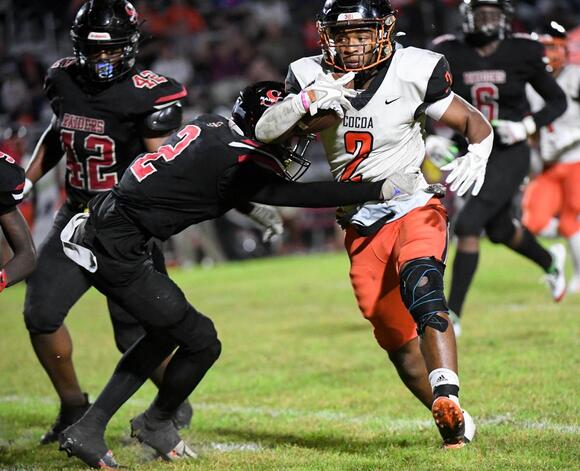 Recruit to watch: RB/S Micahi Danzy. Anytime a football player is one of the fastest runners in the state, colleges are going to take notice. Danzy, whose offers include Florida State, Georgia, Michigan State, Mississippi State and Ole Miss, was fourth in the 200 meters and the state runner-up in the 400 meters at the Class 2S Track and Field championships in May.

Recruit to watch: S Cedrick Hawkins. The Ohio State commit is a physical tackler who has racked up 14 interceptions and 43 passes break ups during his varsity career. The 6-foot-1, 177-pound Hawkins also has been a big part of the Tigers passing game with 38 cactehs for 671 yards and five scores this fall.

Cocoa is on an eight-game win streak since an overtime loss at Sanford-Seminole on Oct. 7. The Tigers, who played had the strongest strength of schedule in Class 2S, other two losses were against Jones (Class 3M regional champion) and St. Thomas Aquinas (3M state finalist). Florida High, the top-ranked team in the FHSAA power rankings during the regular season, has scored at least 38 points at least eight times this season. Cocoa’s offense has at least 250 passing yards in 10 games this season. Florida High has rushed for at least 200 yards in 10 consecutive games.

Friday's temperatures across the continental United States may have had some South Floridians thinking "are we even in the same country?" It's also a reminder why so many people move to Florida and revel in the fact that the Sunshine State features the lone strip of warmer-indicating yellow, orange and even red on...
PALM BEACH COUNTY, FL・9 HOURS AGO
Palm Beach Daily News

The latest on COVID in Florida: It's looking up, but sewage counts rising in 3 counties

Another sign of how deeply red Florida has become emerged Friday when the anti-Trump Lincoln Project's list of 18 targeted congressional Republicans omitted any from the Sunshine State. What we know: Why Florida's GOP congressional delegation has mushroomed ...
FLORIDA STATE・8 HOURS AGO
Palm Beach Daily News

Good news. Apparently, state legislators may be running out of everyday Floridians to mess with, so they’ve decided to go after each other. This has taken the form of a flyer being distributed among Florida lawmakers that advises women lawmakers that they should not wear skirts or dresses with hemlines that are more than 1 inch above their knees when they’re at work in the Capitol.
FLORIDA STATE・2 DAYS AGO
Palm Beach Daily News

Direct flights from West Palm to Delaware start this month

Getting to and from the Florida and the nation's first state just got easier. Avelo Airlines newest nonstop service from Palm Beach International Airport to Wilmington New Castle Airport, which is coded ILG, begin Saturday. ...
DELAWARE STATE・7 HOURS AGO
Palm Beach Daily News

It was billed as an educational reform, although many saw it for what it was — a threat to Florida's public schools. In 1999, Gov. Jeb Bush signed the A-Plus program into law, a school-choice initiative that came with tough academic standards and the promise of using public-school funding to pay for private-school vouchers.
FLORIDA STATE・2 DAYS AGO