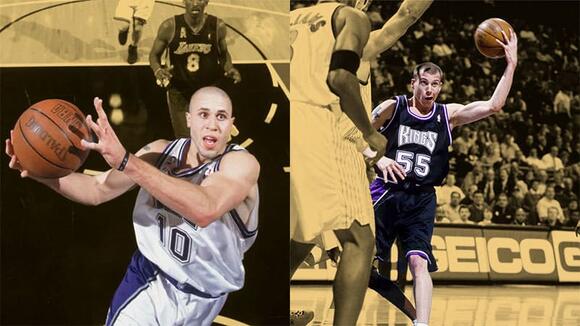 When the Sacramento Kings drafted Jason Williams in 1998, he brought streetball into Sac-Town, and fans quickly adored his flashy playground plays. In 2001, Mike Bibby replaced “White Chocolate” and helped build one of the coolest NBA teams ever assembled.

All told, both Bibby and Williams left their mark on the team, so it’s understandable if the Kings faithful couldn’t put one over the other. In fact, even a former teammate of the two, Scot Pollard, found it hard to pick one.

If you are an And1-like playground basketball junkie, you’d definitely root for Williams. But if you admire small but tough guys, who could take a devastating elbow from Kobe Bryant, then you’d probably go for Bibby. Like most of us, Pollard also knew the difference between the two.

“ Jason Williams was a magician with the basketball. The things that people saw in games were about 8 out of 10. In practice, when there was no referees, we would see the 10 out of 10 Jason Williams. Sometimes it was a carry, or sometimes it was a double dribble or a travelling or whatever because he was just pushing the limits in practice so that in games he could tone it down a little bit and still do so many amazing things with the basketball, ” Pollard told KJhoops in 2018.

He continued, “ And then Mike Bibby was the right point guard because he hit big shots for us when other players couldn’t or didn’t. Mike wasn’t scared to take that big shot and he hit them a lot of times. ”

But who did it better?

To make this even harder, let’s delve into the impact of Williams and Bibby on the Kings. As we can all remember, “White Chocolate” made all four of his teammates on the floor better whenever he was in charge. Through his fancy playmaking, even the Kings’ reserves had their fair share of highlights.

On the other hand, Bib had that killer instinct, and he always delivered when the team needed someone to step up.

Well aware of all that, Pollard opted not to pick a better player between the two backcourts. Not because he didn’t want to be biased but because he just appreciates both.

Don’t worry, Scot. We feel for you.

Draymond Green gets vocal on how Rui Hachimura could be a great asset for the LA Lakers after landing at his dream destination.
LOS ANGELES, CA・2 DAYS AGO
BasketballNetwork.net

Instead of dunking, Robertson opted to bait a foul from defenders for and-1 opportunities.
1 DAY AGO
FadeawayWorld.net

Former Hornets owner Bob Johnson admitted that selling the franchise was one of his big regrets.
CHARLOTTE, NC・22 HOURS AGO
BasketballNetwork.net

PG has always looked up to "King James" despite the two having tough battles over the years.
LOS ANGELES, CA・2 DAYS AGO
BasketballNetwork.net

"I couldn’t stand him. And I love him now” - Dwyane Wade claims Isiah Thomas is the greatest player from Chicago

It’s nice to know that despite Isiah Thomas’ history with the city of Chicago, he’s still very much adored by those who were born and raised in the city like Dwyane Wade.
CHICAGO, IL・2 DAYS AGO
BasketballNetwork.net

Matt Barnes and David Patterson Jr. got into a heated altercation at the 49ers vs. Cowboys game last weekend.
1 DAY AGO
BasketballNetwork.net

“LeBron can’t do what I can do, being a bust is better!” - Kwame Brown makes controversial LeBron James comparison

Even though Mobley turned out to be far from the player Jordan was, he is still grateful to have learned a lot of things from “His Airness."
HOUSTON, TX・2 DAYS AGO
BasketballNetwork.net

Skip Bayless complements LeBron's 46-point outburst against Los Angeles Clippers by indicating just how bad he has been from the 3-Point Line
LOS ANGELES, CA・2 DAYS AGO
BasketballNetwork.net

“I never feel in competition with those guys” - Kenny Smith reveals why he, Shaquille O’Neal, and Charles Barkley are a perfect fit on TV

Kenny Smith recently dived into why the brother hood between himself, Shaquille O'Neal and Charles Barkley manifests itself on the big screen
23 HOURS AGO
BasketballNetwork.net

“No Rodman, no Grant? Oh we smacking them!" - Kenny Smith believes the Houston Rockets would have won the 1994 & 1995 Finals even if Michael Jordan was still on the Chicago Bulls

We obviously won't ever know the answer to this question, but it feels like the Bulls would have had a very tough time beating the Rockets in these two seasons
HOUSTON, TX・1 DAY AGO
BasketballNetwork.net

Some Lakers fans likely won't be thrilled to hear about the team's supposed reason for holding on to Russ
LOS ANGELES, CA・1 DAY AGO
BasketballNetwork.net

Kendrick Perkins makes an honest plea to the Nets to trade Ben Simmons before the 2023 trade deadline.
BROOKLYN, NY・1 DAY AGO
BasketballNetwork.net

"They’re over there trying to get paid, not play winning basketball” - Spencer Dinwiddie takes shots at former Washington Wizards teammates

What was ironic about Dinwiddie’s controversial statement was that he’s talking about the same Wizards team they lost to.
DALLAS, TX・2 DAYS AGO
BasketballNetwork.net

Kwame Brown opens up on the hazing he received during his time with the Washington Wizards from Michael Jordan - "It happened to me, it happened to the majority of players in there"

Kwame Brown said he doesn't blame Michael Jordan for the challenging time he had to endure with the Washington Wizards
WASHINGTON, DC・16 HOURS AGO
BasketballNetwork.net

Before the All-Star Break in the 1985-86 season, the Chicago Bulls had a poor 17-34 record. The young Michael Jordan wanted to help his team in any way he could.
CHICAGO, IL・22 HOURS AGO
BasketballNetwork.net

Unlike most stars, Kobe Bryant did not shut down all communication lines during the playoffs.
LOS ANGELES, CA・1 DAY AGO