Kirstie Alley's ex-husband Parker Stevenson pays tribute after her death: 'You will be missed' 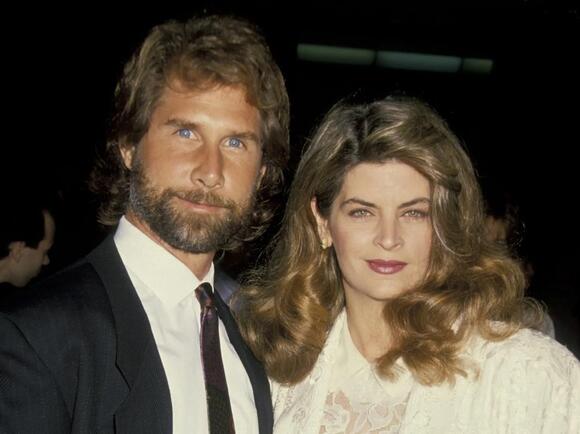 Parker Stevenson has paid tribute to his ex-wife Kirstie Alley following the news of her death.

The Emmy award-winning actor, best known for her roles in the sitcom "Cheers" and film franchise "Look Who's Talking," passed away from cancer on Monday at the age of 71.

Shortly after the news was announced, "The Hardy Boys" star shared on Instagram a photo of himself and Alley at the premiere of her 1988 movie "Shoot to Kill."

Stevenson's touching tribute to his former spouse of 14 years read: "Dear Kirstie, I am so grateful for our years together and for the two incredibly beautiful children and now grandchildren that we have."

"You will be missed. With love, Parker," he ended the post.

Alley's death was confirmed in a statement released on Twitter by her and Stevenson's children, True and Lillie Parker, who described her as an "incredible, fierce and loving mother."

They did not specify what cancer Alley had, but said it was "only recently discovered".

"She was surrounded by her closest family and fought with great strength, leaving us with a certainty of her never-ending joy of living and whatever adventures lie ahead," the post read. "As iconic as she was on screen, she was an even more amazing mother and grandmother."

The siblings went on to thank the "incredible" team of doctors and nurses at the Moffitt Cancer Center in Tampa, Florida, for their care and praised Alley's "zest and passion for life, her children, grandchildren, and her many animals, not to mention her eternal joy of creating."

"We thank you for your love and prayers and ask that you respect our privacy at this difficult time. With love always, True and Lillie Parker," the statement concluded.

Alley and Stevenson were married between 1983 to 1997. It was Stevenson's first marriage, but Alley's second as she was previously married from 1970 to 1977 to her high-school sweetheart Bob Alley, who coincidentally had the same name as her father.

Alley and Stevenson welcomed True in 1992 and Lillie in 1995, both via adoption following a devastating miscarriage, according to the late actor's 2012 memoir, "The Art Of Men (I Prefer Mine Al Dente)."

Per Us Weekly , Alley has three grandchildren. She and Stevenson became grandparents for the first time in 2016 when True welcomed his first child, and have since welcomed two more grandchildren.

Representatives for Alley did not immediately respond to Insider's request for comment.

My deepest condolences to Kristie family. She will be deeply missed and I always thought that she was one of the most beautiful actress I had ever seen.

She was an awesome actor and person. Her years in Cheers left us all wondering, Diane who? I loved her attitude, quick wit and the story of how she met Parker. Dancing with the Stars, oh man, she was great! I sincerely hope that all her animals, especially the Lemur's, have the best care as I know how much she loved them! Rest in Paradise, Kirstie you deserve it!! From a huge fan in Michigan!

My heart hurts for her family!! I just watched an episode of Cheers on Sunday with her..I loved a lot of her movie.. RIP Now Beautiful She's pain free now

The daughter of a star from The Sopranos has tragically died, just three months after giving birth to a baby girl. Odele Ventimiglia, the daughter of actor John Ventimiglia, passed away on 12 January with a cause of death not yet confirmed publicly. The sad news was confirmed by family...
4 DAYS AGO
HollywoodLife

Leah Remini wasn’t at Jennifer Lopez‘s wedding to Ben Affleck last summer, which was shocking since Leah, 52, and J.Lo, 53, have been close friends for a very long time. But a recent wedding that Leah did make it to was J.Lo’s ex-husband, Marc Anthony, 54, and Nadia Ferreira‘s lavish nuptials in Miami on January 28. Leah, who has known Marc for a long, long time as well, showed off her glamorous look for the “I Need To Know” hitmaker’s special day on Instagram.
MIAMI, FL・19 HOURS AGO
Insider

Sarah Michelle Gellar said her husband Freddie Prinze Jr. wouldn't watch movies with her for 15 years after she spoiled 'The Sixth Sense' for him

The actress revealed on "The Graham Norton Show" Friday that she spoiled the movie's twist for her husband 20 minutes in.
CALIFORNIA STATE・1 DAY AGO
Gillian Sisley

The mother of a 12-year-old has decided she’s no longer going to support her daughter’s gymnast dreams due to her being ‘too tall’. The mom has now turned to Reddit to find out whether or not she’s making the right choice.
1 DAY AGO
Insider

Austin Butler, who played Elvis in Baz Luhrmann's 2022 film, said he gets "goosebumps" when he thinks about Lisa Marie Presley's tour of Graceland.
1 HOUR AGO
Insider

"Now there's a prince, who's soon to arrive!" Keke Palmer wrote in an Instagram post on Saturday following her baby shower.
1 DAY AGO
Elvis Duran and the Morning Show

Wheel Of Fortune is no stranger to controversies that enrage fans. Recently, a player lost because she took too long of a pause, while another lost for adding an "a," and a different player lost for accidentally adding the word "and," and she wasn't the only one it happened to. Even Celebrity Wheel Of Fortune has seen issues, like when a contestant didn't pronounce a sound correctly. Meanwhile, the show has also been slammed for confusing puzzles, but even with all the debatable moments, no one appearing on the show has ever said anything about it... until now.
1 DAY AGO
Insider

'Proud Family: Louder and Prouder' creators say Keke Palmer called them and 'gangstered' her way into a role

"The Proud Family" creators Bruce W. Smith and Ralph Farquhar said that the "Nope" star told them they had to give her a role in the revival series.
23 HOURS AGO
Insider

Lily Collins wished her dad, Phil Collins, a happy birthday on Instagram with a series of photos of them in matching outfits and poses

Her Instagram post featured a picture of herself wearing a sparkly blue gown and striking a pose in a bathtub, reminiscent of her father's.
NEW YORK STATE・7 HOURS AGO
Insider