Toms River North concludes memorable season with No. 1 ranking in the Shore

An historic season in New Jersey scholastic football, which concluded this past weekend with the first NJSIAA public school group championship games, saw one of the most dominant seasons any team in the history of the Shore Conference has put together.

The Mariners became the first team in the state to finish a season 14-0, the first time in the Shore Conference to win more than 12 games in a season, and, according to South Jersey historian Chuck Langerman, set a state record for points in a season with 660.

After being ranked No. 2 in the Asbury Park Press Top 10 throughout the season, the Mariners finish ranked No. 1 after their state championship win and previous No. 1 Red Bank Catholic's defeat in the non-public B championship game. 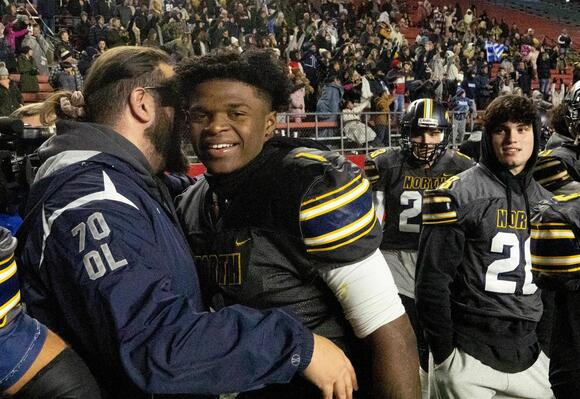 3. Middletown South (9-2): Last ranking: No. 3. Junior Colin Gallagher ran for 116 yards and three TDs and sophomore Brendan Silva ran for a TD as the Eagles concluded their season with a 27-10 win over sister school Middletown North on Thanksgiving Day and extended their lead in the series to 35-12-1 and 33-12-1 on Thanksgiving. Middletown South also advanced to the NJSIAA Central Group 4 championship game and defeated No. 4 Donovan Catholic and No. 5 and NJSIAA Group 2 finalist Rumson-Fair Haven during the season.

5. Rumson-Fair Haven (8-5): Last ranking: No. 7. Sophomore quarterback Owen O'Toole scored on a 1-yard sneak and threw for 212 yards, senior running back Brayden Dill ran for a TD, junior receiver Nick Rigby had 10 receptions for 109 yards, senior linebacker Luke Mikolajczyk had 14 tackles and senior defensive back Ryan Kalman had 12 tackles and two fumble recoveries in the Bulldogs' 18-14 defeat to unbeaten Caldwell in the NJSIAA Group 2 championship game. Rumson-Fair Haven came close to winning the game, but turned the ball over downs at the Caldwell 10 with 2:01 remaining. The Bulldogs won the South Group 2 championship by rallying from a 17-point deficit after three quarters and defeating Raritan 34-27 in double overtime. It was their seventh sectional title - all since 2010. Rumson-Fair Haven's other defeats were to No. 1 Toms River North, No. 2 Red Bank Catholic, No. 3 Middletown South and No. 4 Donovan Catholic.

6. Point Pleasant Boro (9-1): Last ranking: No. 5. The Panthers won their first nine games and the Shore Conference Independence Division championship. They outscored their opposition 421-119 and rushed for over 3,041 yards and 60 TDs. Point Boro's defeat was to Central Group 2 champion Willingboro in a Central 2 semifinal.

7. Ocean (8-1): Last ranking: No. 6. . The Spartans won their first eight games and the Shore Conference Freedom Division championship. Their only defeat came when they played without standout senior quarterback Tyler Douglas in a NJSIAA South Group 3 quarterfinal due to an AC joint sprain in his shoulder.

8. Raritan (8-3): Last ranking: No. 8. The Rockets advanced to the NJSIAA South Group 2 championship and built a 17-point lead after three quarters before Group 2 state finalist and No. 5 Rumson-Fair Haven rallied for a 34-27 win in double overtime. Raritan's other defeats were to Point Pleasant Boro and Ocean.

This article originally appeared on Asbury Park Press: Toms River North concludes memorable season with No. 1 ranking in the Shore