'He won't be denied:' Former FSU great Deion Sanders still strives to be the best 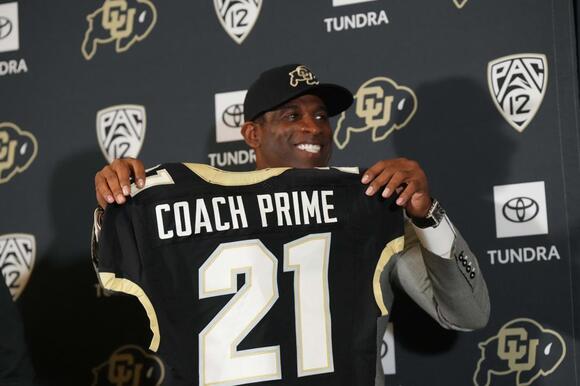 The former Florida State great and NFL Pro Football Hall of Famer was at it again Sunday, when he was introduced as the new head coach at Colorado . Sanders, 55, arrived in Boulder, Colorado, in full flamboyance, confidence and swagger, telling a crowd of fans, administrators and media:

Even if some believe Sanders has stepped out of his comfort zone to take over a beleaguered Pac-12 program in the Mountain States, those who know Sanders believe he will succeed.

Sanders, born and raised in Fort Myers, brings instant name recognition and the ability to recruit top-level talent. He has been at Jackson State, a Historically Black College and University that plays in the NCAA’s second tier of Division I, since 2020, guiding the Tigers (12-0) to consecutive Southwestern Athletic Conference titles as a first-time head coach.

"When I think about Deion, what I think about is a guy who won't be denied," said Mickey Andrews, FSU's former defensive coordinator who coached Sanders during the player's career (1985-88) with the Seminoles.

"I am extremely proud for him. I know coach (Bobby) Bowden would be, too."

A catalyst for change

Following Jackson State's win over Southern in the SWAC championship game Saturday in Jackson, Mississippi, Sanders informed his team he had taken the Colorado job, saying, "you either get elevated or you get terminated." He also talked about the lack of Black head coaches at the highest levels of college football.

Sanders is the first HBCU head coach to get a Power 5 job and the second Black HBCU coach to get an FBS job – the highest level of college football – since Wichita State hired Willie Jeffries in 1979.

"Coach Prime came in and opened a lot of eyes nationally to the brands that encompass HBCU football, but also to some of the challenges we have all faced over decades," said fifth-year Florida A&M coach Willie Simmons, who has also been namedropped in openings across top-tier and second-tier programs during his tenure with the Rattlers.

"To be only the second Black man to leave an HBCU to become a head coach of a Division I FBS program and the first since Willie Jeffries is both a huge accomplishment and also part of the problem with the hiring practices at the major college level."

When Sanders arrived at Jackson State, he stressed he wanted to win – but he also said his presence at the program was bigger than football. He described it as his calling to impact Black athletes and elevate HBCU football and the community. While some have criticized Sanders for leaving Jackson State, others say he accomplished his goals and deserved the opportunity to chase better jobs.

"He left the landscape of HBCUs better off than when he arrived," former FSU and NFL player Willie Jones posted on Facebook. "It's BUSINESS (so) take your emotions out of business deals."

Sanders' heroics as an athlete are well-documented.

He was an All-American at FSU before a standout NFL career with five teams, including the San Francisco 49ers and Dallas Cowboys, where he won a Super Bowl with each. He also played nine MLB seasons and reached the World Series with the Atlanta Braves in 1992. He's the only athlete to play in both a Super Bowl and a World Series.

The Seminole Nation is well aware that Sanders' Prime Time persona initially took over the country while he was at FSU.

"Deion was way ahead of his time when it come to creating a personal brand," said Wayne Hogan, FSU's sports information director at that time, and a former veteran college athletics administrator.

"He knew that a modicum of self-promotion would translate to added attention, fame and ultimately contribute to his personal fortune. When he floated the idea of a nickname, I suggested Neon Deon, which he promptly rejected in favor of his personal choice, Prime Time. Looks like he made the right call. Imagine him being able to counsel his own players in this regard, especially in the era of NIL."

Sanders' competitiveness as a player was well-known, too.

Former FSU teammate and NFL tight end Pat Carter recalled when the pair met in the NFL – Carters was with the Los Angeles Rams and Sanders with the Atlanta Falcons. Carter dropped a pass. "He yelled at me, 'Catch the ball, we (are) Florida State,' " Carter said. "For some reason that has always stuck with me."

After retiring as a player, Sanders became an analyst and a star of reality TV shows and commercials, including current Aflac spots with Alabama coach Nick Saban. He served as a high school coach for seven seasons, coaching his sons, Shilo and Shedeur, at Trinity Christian High in Texas from 2017–20 before being hired at Jackson State.

Sanders interviewed with multiple colleges over the last several years, including FSU after Willie Taggart was fired in 2020 (the Seminoles hired Mike Norell), TCU, Arkansas.

"Good for him – he has really done a good job," said former F SU Athletics Director David Coburn, part of the leadership team that interviewed Sanders and hired Norvell. "Deion is a guy who expects to be successful at everything he does."

Sanders will now attempt to duplicate that success at Colorado, which went 1-11 this season and has fallen off the grid since Hall of Fame coach Bill McCartney led the Buffaloes to a national championship following the 1990 season.

Sanders told the crowd Sunday that "All you want is an opportunity to win, to compete, to dominate, to be amongst the elite, to be among the best – and darn it, I'm going to give you that."

Andrews believes Sanders – who has proven he does not make empty boasts – will be prepared.

"He's going to have to basically start from scratch," Andrews said.

"But he knows how important it is to surround himself with people who can succeed at that level, coaches and players. He knows it's not just about having the best athletes, it's about putting together a team. And how do I get there? But I don't know anyone who believes in himself more than he does. It won't be long (to rebuild the program).

"I don't know a person that cares about what he accomplishes as a team as much as Deion did."

More from NoleSports: 'The judge saved my life': Former FSU star Tamarick Vanover says prison changed him for the better

This article originally appeared on Tallahassee Democrat: 'He won't be denied:' Former FSU great Deion Sanders still strives to be the best

LOUISVILLE, Ky. (AP) — Matthew Cleveland drove the baseline for a layup with 1:32 left to allow Florida State to fend off a late, 17-2 run by Louisville to escape with an 81-78 victory on Saturday. After picking up their first Atlantic Coast Conference win of the season, a...
LOUISVILLE, KY・23 HOURS AGO
Tallahassee Democrat