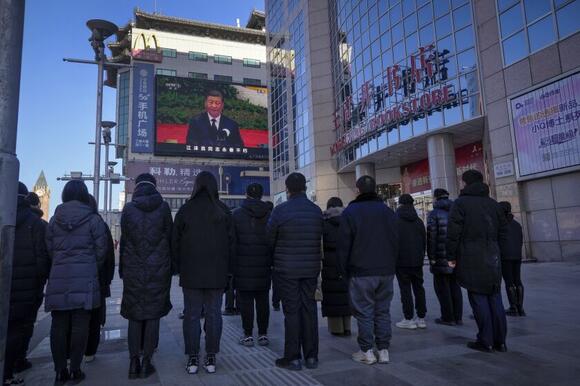 Xi emphasized Jiang's role in maintaining political stability, in an allusion to Jiang's sudden elevation to top leader just ahead of the army’s bloody suppression of the 1989 student-led pro-democracy movement centered on Beijing’s Tiananmen Square.

“Comrade Jiang Zemin emphasized that our party is leading the people in a great struggle to build socialist modernization, and inevitably will encounter many complex situations," Xi said.

“The severe situation at home and abroad and the confrontation and struggle between different social systems and different ideological systems often test every member of our party," he said.

Jiang died last week at 96, just days after public demonstrations over draconian China's COVID-19 restrictions — the biggest street protests the country has seen since 1989. To quell the protests, authorities flooded the streets with security personnel, and an unknown number of people have been detained.

Those attending Tuesday's memorial for Jiang observed three minutes of silence, and trading was paused on the country's stock exchanges.

On Monday, state broadcaster CCTV showed Xi, his predecessor, Hu Jintao , and others bowing before Jiang's body, which was laid out in a bed of flowers and evergreens and covered in a party flag at a military hospital in Beijing. Jiang's body was sent for cremation at the Babaoshan Revolutionary Cemetery, where many Chinese leaders are interred.

Crowds stood silently as Jiang's glass-topped coffin was driven slowly to the cemetery amid high security, possibly as a safeguard against a recurrence of the recent protests.

Jiang led China out of diplomatic isolation over the 1989 crackdown and supported economic reforms that spurred a decade of explosive growth. The economy has slowed as it matures and confronts an aging population, trade sanctions, high unemployment and the fallout from lockdowns and other COVID restrictions imposed by Xi.

An engineer by training and former head of China’s largest city, Shanghai, Jiang was president for a decade, and led the ruling Communist Party for 13 years until 2002. After taking over from reformist paramount leader Deng Xiaoping, he oversaw the handover of Hong Kong from British rule in 1997 and Beijing’s entry into the World Trade Organization in 2001.

The appearance at the memorial service by Hu, 79, who served as president between Jiang and Xi, was his first in public since Oct. 22, when he was unexpectedly guided off the stage during the closing ceremony of the national congress of the Communist Party.

No official explanation was given for his abrupt departure, leading to speculation that it was because of a health crisis or as a signal of protest against Xi, who has eliminated term limits on his position and appointed loyalists to all top posts.

The Hong Kong Stock Exchange did not halt trading, but its external screens at Exchange Square downtown stopped showing data for three minutes. The Chinese Gold and Silver Exchange, also in Hong Kong, suspended trading briefly to mark the occasion.

An official memorial for Jiang drew large crowds over the weekend, mostly older Hong Kongers who credit him with overseeing a smooth transition from British to Chinese rule. The handover was made with a pledge by China that Hong Kong would maintain its own social, economic and legal systems for 50 years.

A sweeping crackdown on freedom of speech and assembly, electoral reforms that effectively eliminated the political opposition and the imposition of a draconian national security law under Xi have drained most of the substance from the “one country, two systems" framework promised under Jiang.

Fox News host Tucker Carlson compared Justin Trudeau to Fidel Castro and said he was "completely in favor of a Bay of Pigs operation" in Canada.
2 DAYS AGO
Los Angeles Times

COVID is still a global emergency but may be nearing an 'inflection point,' WHO says

COVID-19 remains a global health emergency, but the pandemic may be nearing an inflection point amid higher levels of immunity, the WHO says.
1 DAY AGO
Insider

"The girls from Ukraine and Switzerland simply ran from me like fire," Anna Linnikova told Evening Moscow.
LOUISIANA STATE・20 HOURS AGO
Business Insider

This help line is a growing effort to give Ukraine vital advice on repairs and maintenance as it pushes weapons to their limits.
WASHINGTON STATE・1 DAY AGO
Newsweek

"There is no other way to talk to these fools," State Duma member and former military commander Andrey Gurulyov said.
1 DAY AGO
Benzinga

Former U.S. Defense Secretary Robert Gates said ​​Russian President Vladimir Putin believes it’s his “destiny” to recreate the Russian Empire. What Happened: Gates, in an interview on NBC’s “Meet the Press,” said that the Russian president had made it part of his vision to retake old territories to recreate the Kremlin's former geographic sphere of influence.
2 DAYS AGO
CBS News

Bakhmut, eastern Ukraine — The city of Bakhmut was home to around 70,000 people before it found itself on the front line of Russian President Vladimir Putin's unprovoked war to seize Ukrainian territory. Almost 12 months of war have left Bakhmut barely recognizable.          Once renowned for sparkling wine, the small city has been reduced to a hollowed-out shell of its former self. But Bakhmut, and the Ukrainian forces defending it, have hung on. "Bakhmut holds" has even become a battle cry for the nation as it fights back against the Russian invaders. But it's only just holding...
23 HOURS AGO
Los Angeles Times

Russians may be gone, but fear and hardship remain in a recaptured Ukrainian village

Liberation has not diminished the hardship for residents of the Ukrainian village of Kalynivske, both those returning home and those who never left.
2 DAYS AGO
Los Angeles Times

With tanks on the way, talk of sending Ukraine warplanes could strain Western unity anew

The possibility of providing Kyiv with fighter jets to help beat back Russia's invasion risks the unity of Ukraine's Western allies.
1 DAY AGO
Los Angeles Times

Tens of thousands of Israelis have poured into the streets each weekend to protest changes Netanyahu and his coalition are planning that opponents believe will curtail civil liberties.
2 DAYS AGO
Los Angeles Times

4 more suspects in Haiti president's slaying are in U.S. custody

Four key suspects in the killing of Haitian President Jovenel Moise have been transferred to the U.S. for prosecution as judges in Haiti face death threats.
10 HOURS AGO
Los Angeles Times

Many thought the death of 300 people in a boat fire would cause the European Union to reshape its approach to migration, but little has changed.
11 HOURS AGO