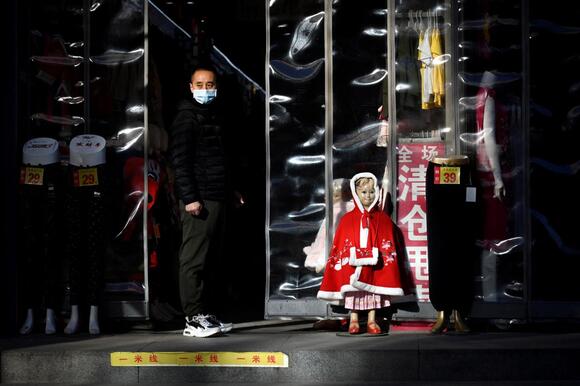 China is stripping down its Covid restrictions for millions as it allowed people to enter supermarkets, offices and airports without showing negative test results on Tuesday.

Several news headlines in China confirmed the country’s limp back to normalcy after it was rocked by historic protests last month against the Xi Jingping regime as frustration among millions spilled onto the streets. The country also recorded daily cases peaking to 40,000 during its pandemic-worst.

“Beijing readies itself for life again,” read a headline in the state-owned China Daily newspaper as it claimed that people were “gradually embracing” the slow return to a life without Covid outbreak.

"The most difficult period has passed," said the official Xinhua news agency in a commentary published late on Monday. The report backed China’s return to normalcy due to weakening pathogenicity of the virus and its attempt to administer vaccination to at least 90 per cent of the population.

Officials have said that people will not be required to show a negative Covid result for using subways, among loosening of several curbs — some of the harshest globally — signalling indication from the administration towards normalcy three years into the pandemic.

A total of 27,847 single-day infections were recorded on Tuesday, China’s National Health Commission said. Many remained suspicious of the reliability of the daily tally, according to reports.

Hu Dongxu, 27, swiped his travel card to enter a train station and welcomed the move. "This might be the first step towards reopening from this pandemic," he told Reuters.

From Tuesday onwards, people will no longer be required to undergo Covid tests to enter the city airport’s terminal.

It is not immediately clear if people are still asked to show negative covid tests prior to boarding.

China was rocked by protests in November-end against crippling restrictions — which locals say prevented swift firefighting operations in Xinjiang leading to death of 10, at the same time it saw high caseload, alarming some residents who are still exercising caution.

For 22-year-old student James Liu in the southern province of Guangdong, there is a reason to observe Covid safety protocols after authorities "abruptly" dropped testing requirements for entry into the family’s residential compound.

“My parents are still very cautious,” he said.

The health officials are also bracing from a Covid outbreak among the frontline medical staff and migrant workers returning home during the lunar new year holiday, worrying that another surge could strain the already burdened healthcare system overwhelmed by the virus.

China has recorded a total of 5,235 Covid deaths so far but experts are warning that the toll could shoot past 1 million if the exit from virus curbs is too speedy.

Analysts have also predicted that China may reopen the economy and drop border controls sooner than expected next year, with some seeing it fully open in spring.

A four-star US Air Force general has said that Washington is expecting a potential war with China in 2025 and asked his commanders to prepare for battle by aiming “for the head”.General Mike Minihan, the head of the Air Mobility Command, said the US’s main goal should be to deter “and, if required, defeat” China, in a shocking internal memorandum signed off by him and confirmed to be genuine by the Pentagon.The memo, which has been circulating on social media, was first reported by NBC News and is dated 1 February of this year. It contains several pointers, including...
WASHINGTON STATE・1 DAY AGO
The Guardian

In gathering histories from one of the country’s darkest, most divisive periods, the former Guardian China correspondent has created a gripping and important document
18 MINUTES AGO
Sikara

There will be a fierce war between the US and China, the Air Force General said - prepare to hit the head

Minihan said the main goal should be to defeat China. "I hope I'm wrong, but my conscience says that in 2025 we (US-China) will be a fight . US-China War: Relations between the US and China have been strained for the last few years. Both countries are against each other's ideology on many issues including Taiwan, South China Sea. Meanwhile, the senior general of the US Air Force has claimed that there may be a fierce war between the two countries in the year 2025. Four-star U.S. General Mike Minihan has said the war will be over Taiwan and urged its commanders to push their units to achieve maximum combat readiness this year. In this regard, he wrote an internal memo, which first surfaced on social media and later the Pentagon confirmed its authenticity. The memo showed that he has asked command personnel to prepare for head-to-head targeting .
1 DAY AGO
Ingram Atkinson

The world's first human-monkey hybrid has been successfully created in a laboratory, according to shocking research from Chinese scientists. This horrifying development occurred in 2021, after a team of researchers from the United States and Spain traveled to China in order to get around regulations that forbade this kind of research in their own nations.
3 DAYS AGO
Newsweek

The Mil Mi-8 helicopter hit the ground at Vnukovo airport with its blades and tail, Russian media reported.
1 DAY AGO
Business Insider

A top Russian diplomat warned the U.S. in July 2022 against proceeding with efforts to bring the country before an international war court. 'Wrath Of God:' Dmitry Medvedev, the deputy secretary of Russia's Security Council, said the U.S. may have to face the "wrath of God" if it helps set up an international tribunal to investigate Russia's action in Ukraine, the Associated Press reported.
11 HOURS AGO
msn.com

The global oil market remains tight according to Saudi Aramco, the largest oil producer in the world. And that does not bode well for a world that still relies heavily on fossil fuels. Disclaimer: We adhere to strict standards of editorial integrity to help you make decisions with confidence. All...
1 DAY AGO
The Independent

Rishi Sunak has said that the “hearts of the British people” are with Ukraine in a surprise intervention on the war.The prime minister also paid tribute to the ongoing bravery of ordinary Ukrainians.With just weeks to go before the first anniversary of the conflict, Mr Sunak reiterated his pledge that the UK government would stand with Ukraine “for as long as it takes”.His renewed support for the people of Ukraine came as he passed a personal message to the Ukrainian ambassador to pass onto to President Zelenskyy and the people of Ukraine at a fundraiser at the Royal Academy...
22 HOURS AGO
The Independent

Russia’s embassy in North Korea says the country has eased stringent epidemic controls in capital Pyongyang that were placed during the past five days to slow the spread of respiratory illnesses. North Korea has not officially acknowledged a lockdown in Pyongyang or a re-emergence of COVID-19 after leader Kim Jong Un declared a widely disputed victory over the coronavirus in August, but the Russian embassy’s Facebook posts have provided rare glimpses into the secretive country’s infectious disease controls.The embassy posted a notice Monday issued by North Korea’s Foreign Ministry informing foreign diplomats that the “special anti-epidemic period” imposed in...
1 HOUR AGO
The Independent

She joined the women’s protests against the Taliban in Afghanistan. Now she’s wants the UK to take her in

On 15 August 2021, the Taliban came to power in Afghanistan. Two days later, Behishta joined the movement to resist them.A television journalist for Afghan broadcaster Noor TV, she had made a career from being outspoken on women’s rights and attracted criticism for her views.There was the time in 2018 when she decided to run a programme on virginity testing, a barbaric practice where women are subjected to a faux medical procedure to determine their virginity. Her critics rang in to complain that such a topic was being discussed in an Islamic country.Or the time when she ran a civil...
14 HOURS AGO
The Independent

On Idit Silman’s first day as Israel’s new environmental protection minister, she handed out soft drinks in disposable plastic cups to hospital patients.The gesture held deep symbolic meaning in Israel, where soft drinks and single-use cups, plates and cutlery have become weapons in a culture war between the country’s secular Jewish majority and the smaller but politically powerful religious minority. For much of the public, a tax imposed last year on plastic goods seemed like a straightforward way to cut down on the use of items that are major sources of pollution. But many ultra-Orthodox Jews saw the extra...
1 HOUR AGO
TheConversationAU

After years of austerity, Revive writes the next chapter in Australian literary culture

The Albanese government’s Revive is Australia’s first national cultural policy in ten years. The last was the Gillard government’s Creative Australia in 2013. Revive promises to “empower our talented artists and arts organisations”, reaching new audiences “and telling stories in compelling new ways”. At this morning’s launch, there was a particular emphasis on support for the literary sector, which Arts Minister Tony Burke – who famously starts his day reading poetry – acknowledged has been deeply underfunded in the past. A new body, Writers Australia, will be established within Creative Australia, a restored and revived version of the long-running Australia...
24 MINUTES AGO
Reuters

Russia says nuclear arms treaty with U.S. may end after 2026

Jan 30 (Reuters) - Russia's deputy foreign minister said in an interview published on Monday that it was "quite possible" the New START nuclear arms control treaty with the United States would end after 2026.
53 MINUTES AGO
The Guardian

Documentary sheds light on responses to a fence designed to keep migrants of the EU Schengen area, a dizzyingly complex issue
18 MINUTES AGO
WSB Channel 2 Atlanta

Is there hope for a dying river in Kenya's growing capital?

NAIROBI, Kenya — (AP) — Vultures scavenge for dead animals along a river turned sewer conduit in Kenya's capital Nairobi. Its waters turn from clear to black as it traverses informal settlements and industrial hubs. The river and its tributaries cross Kibera, known as Africa’s largest slum with...
10 MINUTES AGO
WFTV Channel 9 Orlando

TOKYO — (AP) — Nissan and Renault have changed their mutual cross-shareholdings equal at 15%, ironing out a source of conflict in the Japan-French auto alliance. Renault Group will transfer 28.4% of the Nissan shares it owns into a French trust, so its stake will be the same 15% that Nissan Motor Co. has in the French automaker.
22 MINUTES AGO
The Guardian

‘We must make time our weapon,’ Zelenskiy says in call to speed up supply of arms; Bakhmut, Vuhledar and Donetsk region under ‘constant Russian attacks’
32 MINUTES AGO
The Independent

Rishi Sunak should defy the “purist ideology” of hardline Brexiteers to solve the row over the Northern Ireland protocol and other post-Brexit problems, top lawyers have argued.In a paper shared with The Independent, former EU court lawyers said the prime minister had to show “political courage, in the national interest, to displease a faction of Brexit purists”.Eleanor Sharpston KC, former advocate general at the Court of Justice of the European Union, and Ian Forrester KC, a former judge at the same EU court, said it was time for “pragmatic good sense” to prevail in order to repair ties with Brussels.The Tory government’s...
10 HOURS AGO