Delaware News - Delawareonline is the home page of The News Journal with in depth and updated local news.

Nakobe Dean finally got a chance to play. When will he, other Eagles rookies get more?

PHILADELPHIA − Nakobe Dean has shown that he can play now, even though he still might have to wait until 2023 to get his chance.

The rookie linebacker played a season-high 15 snaps Sunday filling in for starter Kyzir White after White left the game with an undisclosed injury in the Eagles' 35-10 win over the Tennessee Titans.

Dean, the Eagles' third-round pick, tied for second with White with 5 tackles, one behind fellow linebacker T.J. Edwards. Dean had played a total of 4 snaps in the Eagles' first 11 games.

Eagles coach Nick Sirianni didn't have an update on White's injury Monday, saying it's not "anything that we're concerned about."

So it's possible Dean will be back on the bench when the Eagles face the Giants on Sunday at MetLife Stadium. Of course, it's hard for Dean or any of the rookies to complain about playing time when the Eagles are 11-1. And they haven't. 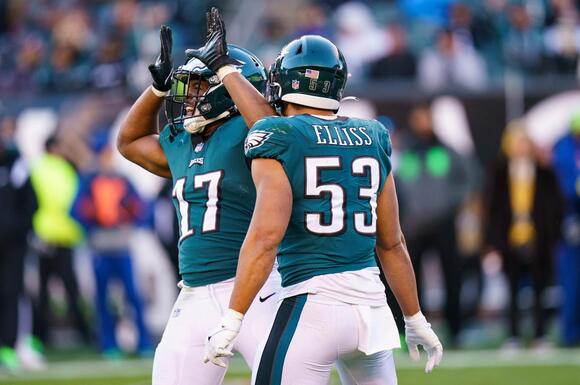 "Nakobe has to keep trying to make his way through special teams − and when he gets the opportunity to play."

First-round pick Jordan Davis, a defensive tackle, was playing about 35% of the snaps before he suffered a high-ankle sprain on Oct. 30 against Pittsburgh.

Since then, the Eagles added veterans Linval Joseph and Ndamukong Suh to go along with Fletcher Cox and Javon Hargrave. Davis returned to the lineup Sunday and played just 6 snaps.

Second-round pick Cam Jurgens is behind veterans Jason Kelce at center and Isaac Seumalo at right guard. Jurgens played 11 snaps Sunday at center when Kelce left in the fourth quarter. He played 17 snaps total before that.

The situation could be different next season, at least for Davis, Jurgens and Dean.

That's because Davis and Milton Williams, the Eagles' third-round pick in 2021, are the only defensive tackles under contract for next season. As for Jurgens, Kelce, who's 35, has contemplated retirement during the last four offseasons.

At linebacker, Edwards and White are in the final year of their contracts. It's expected the Eagles won't re-sign both.

For now, Dean has realized that special teams will be his way onto the field. Here, he has made an impact.

Against the Titans, Sirianni said Dean's special teams play "really established the physicality that we wanted to play with," pointing to his tackle on C.J. Board on the second-half kickoff.

"It’s just been the normal college to NFL adjustment," Dean said last week, adding that he played special teams at Georgia. "I wouldn’t say (special teams) has been overly confusing because it’s not complicated at all. It’s just doing different techniques."

And waiting for his chance at linebacker.

Defensive end Robert Quinn, who was acquired a week before the trade deadline in October, is heading to injured reserve to have arthroscopic knee surgery, the NFL Network reported.

The injury is not considered season-ending, but Quinn would have to miss four games, meaning he could return for the season finale on Jan. 8. If the Eagles get the top seed in the playoffs, they wouldn't play again until the weekend of Jan. 21-22.

The Eagles traded a fourth-round pick to the Chicago Bears for Quinn, 32. He had 1 sack in 7 games with the Bears, and none in 5 games with the Eagles.

This article originally appeared on Delaware News Journal: Nakobe Dean finally got a chance to play. When will he, other Eagles rookies get more?

Jalen Hurts might be in for a treat! The star quarterback of the Eagles has been playing phenomenal football throughout the season and has led the Eagles to the Super Bowl. Now that he has proven his potential, he might receive a multi-year contract from Chief executive Howie Roseman says Leigh Steinberg.
PHILADELPHIA, PA・1 DAY AGO
Sports Illustrated

The Hall of Fame quarterback was not happy with the officials during the last of Sunday’s three flag football games.
11 HOURS AGO
Delaware Online | The News Journal

For Eagles 4 legends, Super times, uncertain future, and how Kelce will know when to retire

PHILADELPHIA − We know the history because Jason Kelce, Lane Johnson, Fletcher Cox and Brandon Graham have lived it for at least a decade as the four longest-tenured Eagles. Kelce and Johnson are stalwarts on the offensive line, much like Graham and Cox are on the defensive line. The quartet, in so many ways, has represented the Eagles' core values of building in the so-called trenches.
PHILADELPHIA, PA・2 DAYS AGO
Delaware Online | The News Journal

It was the year of the underdog. At least in the NFL, when the Philadelphia Eagles overcame an injury to MVP candidate Carson Wentz (remember him?) and the greatest quarterback in NFL history to bring Philly fans their first Super Bowl championship. The entire run, from squeaking by the Atlanta...
PHILADELPHIA, PA・2 DAYS AGO
OnlyHomers

There have been a number of sad reports coming out of the world of professional wrestling in recent weeks, with former stars passing away, both during their career and following it.
16 HOURS AGO
Delaware Online | The News Journal

Celebrate the Eagles' Super Bowl season with The News Journal

From the thrilling victory in the opener against the Detroit Lions to the dominating win in the NFC championship game against the San Francisco 49ers to clinch the franchise's fourth trip to the Super Bowl, it has been a memorable season. While there are many special memories, The News Journal is helping you...
EAGLE, PA・2 DAYS AGO
Delaware Online | The News Journal

PHILADELPHIA − There are always key moments and key plays that make a difference in a Super Bowl. Five years ago, for example, who figured rookie running back Corey Clement, an undrafted free agent, would have 100 yards receiving, including a 22-yard touchdown catch, in the Eagles' 41-33 Super Bowl win over the New England Patriots?
PHILADELPHIA, PA・1 DAY AGO
Delaware Online | The News Journal

The Philadelphia Eagles' magical run through the season has left them one win away from their second Super Bowl title. The Eagles will face the Kansas City Chiefs in the 2023 Super Bowl at 6:30 p.m. Sunday in Glendale, Arizona. Here's a look at everything you need to know leading...
PHILADELPHIA, PA・2 DAYS AGO

Delaware News - Delawareonline is the home page of The News Journal with in depth and updated local news.