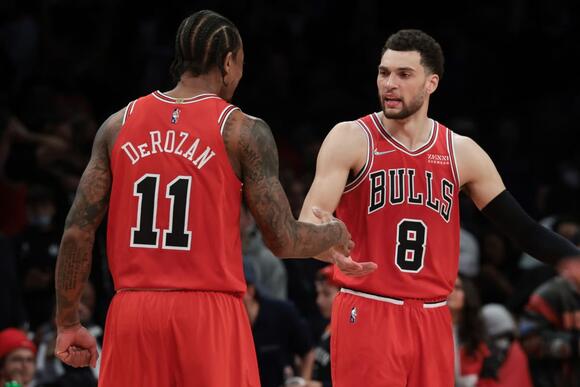 The Chicago Bulls have had a disappointing season so far, but Zach LaVine and DeMar DeRozan refuse to give up.

NBA stars soak in all the shine when things are going well. However, when the team's performance declines, the stars take most of the blame. That's currently the situation for Zach LaVine and DeMar DeRozan, as they have shouldered much of the responsibility for the Chicago Bulls ' lackluster performances so far this season.

At 9-14, the Bulls stand well outside of the playoff picture. But despite the team's struggles, LaVine and DeRozan remain optimistic that they can still turn things around.

The urgency of the situation

With a quarter of the regular season in the books, there are still plenty of games left to be played. With that, LaVine and DeRozan recognize the urgency of the situation, knowing they need to find some spark quickly if they want to turn around their fortunes.

For that to happen, LaVine says the team's leaders must dig deep and even have difficult conversations if needed.

"That's for the leaders of the team to do — band together. It's us versus everybody. Nobody is going to help us dig out of this hole besides us. There will be tough conversations, words said. Sometimes you need that," LaVine said after the Bulls fell to the Sacramento Kings 101-110.

LaVine added they're trying to pull off all the stops to turn this season around; it just hasn't happened yet.

"We talk to each other every day. We watch film. We have pride. Guys have individual goals. It's just executing it," LaVine said.

DeRozan has encountered rough waters of late. After shooting 6-of-18 against the Golden State Warriors, the Compton native made 4-of-15 against the Kings. Despite the poor shooting marks, DeRozan remains unfazed, and woe is the team that underestimates him and the Bulls moving forward.

"I've got the most confidence in the world. Once it clicks, it's going to click no matter who we're playing," said DeRozan.

Keys to the game and injury report: Chicago Bulls in desperate need of a win vs. Los Angeles Clippers

Trade rumors: Could Coby White and Andre Drummond be on the move?

Could the Bulls move some players to upgrade their roster and make a playoff push?
CHICAGO, IL・1 DAY AGO
Bulls News

With the trade deadline looming, which players on the Bulls are most likely to be traded?
CHICAGO, IL・1 DAY AGO
Bulls News

Is there enough time for Lonzo Ball to make a comeback this season?

With the Chicago Bulls struggling to stay in playoff contention, should Lonzo Ball make a comeback this season?
CHICAGO, IL・2 DAYS AGO
Bulls News

"You put the work in, and it's bound to show" - Patrick Williams slowly living up to his potential

Patrick Williams has worked hard to live up to his potential and his recent stats back that up.
CHICAGO, IL・1 DAY AGO
rolling out

LeBron James is being attacked for the way he responded to the video beatdown of Memphis motorist Tyre Nichols on Jan. 7, 2023,. The 29-year-old Black male was beaten to a pulp on the streets of Memphis, Tennessee, following a traffic stop for allegedly driving recklessly, though that was never established by the responding officers.
MEMPHIS, TN・2 DAYS AGO
The Spun

Safe to say, Caruso is staying put at the trade deadline next week.
CHICAGO, IL・1 DAY AGO