'It sucks:' What Dennis Allen had to say after Saints' brutal collapse vs Bucs 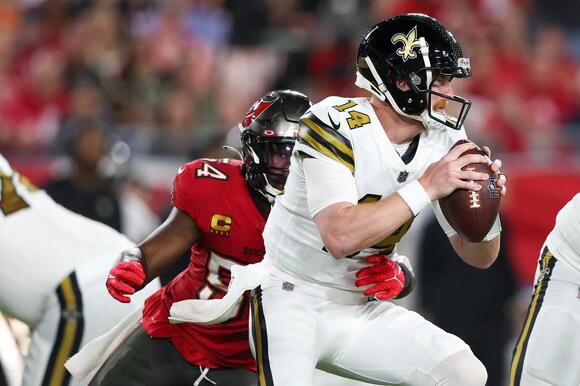 Dennis Allen stepped to the podium and didn't mince words.

This loss hit a bit harder, even if the Saints head coach didn't note the obvious point that it effectively ended the season for his team in his debut as the head coach.

"Yeah, look, it sucks. It stings, it hurts," Dennis Allen said. "We're going to get a little time in this bye, get rested and recovered. And then we'll be back at work, getting ready for Atlanta. And that's what our job is our job is. Our job is to get ourselves prepared to go play the best football we can. So that's what we'll do."

If it stings more than the other eight losses this team has suffered this season, that's likely due to how close it felt like the Saints were to winning it and how long they were in that position. The Saints trailed 3-0 after the Bucs opening drive, then scored the next 16 points in the game. But there were missed opportunities that stick out like thorns in hindsight.

It all added up to the Saints losing a game they had dominated for 57 minutes, with the Bucs scoring the go-ahead touchdown with 3 seconds remaining in the game. Instead of going into the bye week a half-game out of the division lead, it's 2.5 games with the Bucs now owning the tiebreaker. Mathematically there are still questions to answer, realistically the bed is made.

WILL YOU LOOK AT A POTENTIAL QB CHANGE?

Saints QB Andy Dalton has been the starter since Week 4. The team has gone 3-7 since he's had the reins, but it doesn't sound like he's in danger of having his job handed back to Jameis Winston.

"I don't think we go there right now," Allen said. "I mean, we just lost a tough-ass game. I thought I thought Andy [Dalton] actually played pretty pretty well in this game."

Allen's assessment of Dalton's performance feels fair. He went 20-28 for 229 yards and a touchdown. The key drops are outside of his control, just as they were late in the loss to the 49ers. Could a change spark things? Maybe, but it doesn't appear that will be the case unless Allen's tune changes throughout the bye week.

Patrick Mahomes is done hearing about all this "Burrowhead" talk.  During his postgame interview on Sunday night, Mahomes took a shot at Joe Burrow and the Bengals.  The Chiefs quarterback made it clear it's called Arrowhead Stadium.  “We showed this place is Arrowhead, it’s not ...
CINCINNATI, OH・8 HOURS AGO
thecomeback.com

When the Cincinnati Bengals take on the Kansas City Chiefs in the AFC title game on Sunday night, they’ll be doing it without three of their starting offensive linemen as La’el Collins, Alex Cappa and Jonah Williams will all be sidelined from the game with injuries. The three...
CINCINNATI, OH・1 DAY AGO
WWL-AMFM

The New Orleans Saints and the Senior Bowl, it’s a match made in Mobile. But how much do they love it? Here’s a breakdown of all 49 players they’ve picked out of the Mobile showcase in the Mickey Loomis era.
NEW ORLEANS, LA・2 DAYS AGO
The Spun