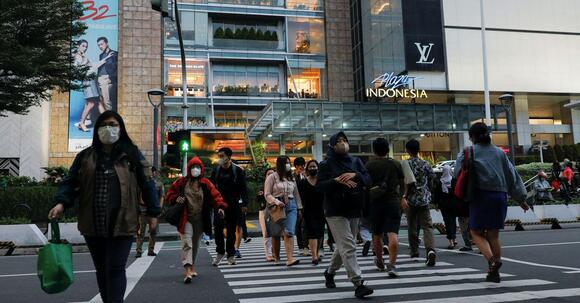 JAKARTA, Dec 6 (Reuters) - Indonesia's president has asked the government to create a mechanism next year to ensure the rollout of B35 biodiesel, a senior minister said on Tuesday.

Indonesia, the world's top palm oil producer, currently has a mandatory 30% mix of palm oil fuel in biodiesel, known as B30.

"With the implementation of B35, it will reduce our dependency on (oil) imports," Chief Economics Minister Airlangga Hartarto said.

He did not provide further detail on plans for B35 implementation or give any timetable.

Speaking after a cabinet meeting, Airlangga also said that the government expects headline inflation at the end of 2022 to be between 5.34% and 5.5%.

"We will monitor the global geopolitical environment, extreme weather and the scarring effects on inflation," Airlangga said.

(Reuters) - The European Union’s ban on imports of Russian refined oil products, including diesel and jet fuel, will disrupt global flows once it takes effect on Sunday and could hurt Moscow more than an embargo on crude oil.
2 DAYS AGO
Reuters

Feb 4 (Reuters) - The United Arab Emirates (UAE), France and India established a tripartite cooperation initiative in several areas including energy and climate change and drew a road map to implement it, the Emirati state news agency WAM reported on Saturday.
4 HOURS AGO
Reuters

JAKARTA, Feb 4 (Reuters) - Indonesia plans to intensify talks with China and other Southeast Asian countries to finalise a code of conduct (COC) for the disputed South China Sea, its foreign minister said on Saturday, amid escalating tensions in the strategic waterway.
12 HOURS AGO
Reuters

WASHINGTON, Feb 3 (Reuters) - A Chinese spy balloon has changed course and is now floating eastward at about 60,000 feet (18,300 meters) over the central United States, demonstrating a capability to maneuver, the U.S. military said on Friday, in the latest twist to a spying saga that led U.S. Secretary of State Antony Blinken to postpone a visit to China.
KANSAS STATE・23 HOURS AGO
Reuters

SYRACUSE, New York, Feb 4 (Reuters) - President Joe Biden said on Saturday that the United States is "going to take care of" a suspected Chinese spy balloon that has been tracked flying across the United States.
MONTANA STATE・1 HOUR AGO
Reuters

MILAN, Feb 4 (Reuters) - The European Central Bank (ECB) can take a cautious approach to raising interest rates given that short-term inflation expectations have dropped sharply and longer-term ones remain under control, a top Italian policymaker said on Saturday.
6 HOURS AGO
Reuters

ANKARA, Feb 3 (Reuters) - Turkey's airport ground service provider Havas told Russian and Belarusian airliners that it may stop providing services to their United States-origin aircraft, in line with Western sanctions against Moscow over its invasion of Ukraine.
21 HOURS AGO
Reuters

HELSINKI, Feb 2 (Reuters) - Finland and Sweden remain committed to joining NATO at the same time despite Turkey's opposition to the Swedish candidacy, the two countries' prime ministers told a joint news conference in Stockholm on Thursday.
2 DAYS AGO
Reuters

Feb 3 (Reuters) - Japanese startup Aerwins Technologies, which is selling a Star Wars-inspired $555,000 hoverbike, has received approval to list on the NASDAQ in a merger with blank-check firm Pono Capital Corp (PONO.O), the manufacturer said on Friday.
1 DAY AGO
Reuters

MANILA, Feb 4 (Reuters) - The Philippine central bank will focus on inflation rather than the Federal Reserve's recent policy action when it meets on Feb. 16 to review key interest rates, its governor said on Saturday.
20 HOURS AGO
Reuters

KYIV, Feb 3 (Reuters) - Air raid alerts sounded in Kyiv and across Ukraine on Friday as a summit of European Union and Ukrainian leaders was due to begin in the country's capital.
1 DAY AGO
Reuters

VILNIUS, Feb 3 (Reuters) - Traders are using Turkey, Kazakhstan and Armenia to evade European Union sanctions on Russia in a tactic that breaches these countries' compliance with the bloc's embargo, Latvia's prime minister said on Friday.
WASHINGTON STATE・1 DAY AGO
Reuters

BEIJING, Feb 3 (Reuters) - China "firmly objects" to further cooperation between Britain, U.S. and Australia on nuclear submarines, its foreign ministry said in a regular briefing on Friday.
1 DAY AGO