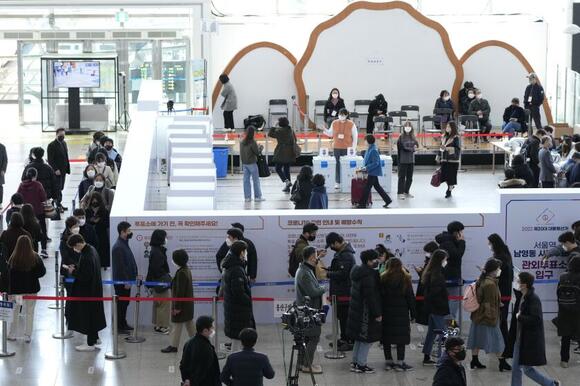 Members of South Korea’s ruling conservative party have proposed a bill that would place tighter restrictions on the voting rights of foreign permanent residents in local elections, which they insist is necessary to protect the country’s democracy from being undermined by Chinese voters.

Critics say the efforts to pass the bill could exacerbate racism and hatred toward Chinese people living in South Korea and would be a step back in an increasingly multicultural society that needs to embrace immigration to make up for an aging and shrinking population.

People Power Party lawmaker Kweon Seong-dong, a close ally of President Yoon Suk Yeol, said Tuesday it has become crucial to prevent the voting system from being exploited as a “maneuvering tool” by other governments. He said, without elaborating, that there’s “significant” public concern over the political influence of Chinese nationals, who accounted for nearly 100,000 of the 127,600 foreigners with voting rights as of March.

“Most of our citizens living overseas don’t have voting rights (in the countries they live in),” Kweon said on Facebook. “(Voting) is obviously impossible in communist countries like China, and the United States and Britain are only giving voting rights to those with citizenship,” which means South Korea’s voting laws go against the principle of reciprocity, he said.

Under current law, foreign nationals with at least three years of permanent residency are eligible to vote for mayors, governors, and local council members.

The bill, submitted by Kweon and 17 other members of his party, limits voting rights to foreigners who have lived in South Korea for at least five years after becoming permanent residents and are from countries which, by treaty or similar agreements, also allow South Korean permanent residents to vote in their elections.

Kweon’s office said it didn’t know of any country that would fit that criteria. South Korea’s National Election Commission said several nations — including Sweden, Denmark, Iceland and Chile — allow foreigners to vote in local elections if they had stayed there for a certain number of years.

“The number of foreign nationals staying in the country is increasing, and when their tendency to live concentrated in certain areas is combined with the characteristics of the local elections, there is high concern that the opinions of our people would be distorted,” the lawmakers said in a statement describing why they drafted the bill. They mentioned concerns expressed by the Canadian and Australian governments this year over alleged Chinese attempts to influence domestic politics and meddle in their elections.

Han Sang-hie, a law professor at Seoul’s Konkuk University, said the concerns raised by South Korean lawmakers are exaggerated, noting that foreigners only vote for local officials and aren’t eligible in elections for lawmakers or heads of state.

“Local politics aren’t about distinguishing between nationalities — they are more about providing ways for people who intend to permanently reside (in that area) to improve their lives and solve their problems through a democratic platform,” Han said.

“South Korea isn’t really an open country that easily gives out permanent residency status, and those who receive that status after a certain period are already blended into their local communities as residents,” he said. He said the bill would infringe upon the rights of migrants married to South Koreans and other groups and likely inspire hatred toward Chinese residents.

South Korea has called on China to be more assertive in efforts to tame the nuclear ambitions of North Korea, which depends on Beijing as its main ally and economic lifeline.

China, which along with Russia has rejected U.S.-led efforts to tighten U.N. Security Council sanctions on North Korea over its accelerated missile testing this year, is concerned over the strengthened three-way security cooperation between Washington, Seoul, and Tokyo.

Beijing has also expressed unease over a growing technology alliance between Washington and Seoul, which it sees as an attempt to move supply chains away from China.

Sri Lanka's president has suspended Parliament until Feb. 8, when he said he would announced a new set of long-term policies to address a range of issues including an unprecedented economic crisis
13 HOURS AGO
Ingram Atkinson

The world's first human-monkey hybrid has been successfully created in a laboratory, according to shocking research from Chinese scientists. This horrifying development occurred in 2021, after a team of researchers from the United States and Spain traveled to China in order to get around regulations that forbade this kind of research in their own nations.
2 DAYS AGO
Benzinga

The Russia-Ukraine War, which began almost a year ago in February 2022, continues unabated. In the fall of last year, a noted American investor shared his views on the economic repercussions of the conflict, and the likely outcome for Russian President Vladimir Putin. Billionaire hedge fund manager Paul Tudor Jones...
8 HOURS AGO
Newsweek

Vladimir Putin, who is believed to be about 5 feet 7 inches, was photographed with students of Lomonosov Moscow State University on Students' Day on Wednesday.
1 DAY AGO
Business Insider

Inflatable tanks are a staple of Russia's deception doctrine known as maskirovka, or masking, meant to boost stealth tactics and sow confusion.
20 HOURS AGO
Newsweek

The Mil Mi-8 helicopter hit the ground at Vnukovo airport with its blades and tail, Russian media reported.
8 HOURS AGO
Benzinga

Over a dozen letters exchanged between former U.S. President Donald Trump and North Korean leader Kim Jong Un have been published by the Korean-American Club. What Happened: Trump’s self-described 'love letters' from Kim were retrieved by the authorities from his Mar-a-Lago residence in Florida. In the letter, Kim reportedly expressed his willingness to discuss his isolated country’s denuclearization with Trump while sidelining then-South Korean President Moon Jae In, reported Star And Stripes.
FLORIDA STATE・8 HOURS AGO
San Diego Union-Tribune

Italy's prime minister has held talks in Libya with officials from the country's west-based government focusing on energy and migration, top issues for Italy and the European Union
6 HOURS AGO
San Diego Union-Tribune

The Taliban are doubling down on their ban on women's education, reinforcing in a message to private universities that Afghan women are barred from taking university entry exams
6 HOURS AGO
San Diego Union-Tribune

Online system to seek asylum in US is quickly overwhelmed

Challenge for Tunisian democracy: Getting voters to show up

Struggling U.K. airline Flybe has collapsed for the second time in less than three years
12 HOURS AGO
San Diego Union-Tribune

Opinion: Joe Biden's record so far — and what does he have left to do?

We asked: President Joe Biden is now halfway through a four-year term. What has he done well, what has he done poorly and what should he focus on going forward?
8 HOURS AGO
San Diego Union-Tribune