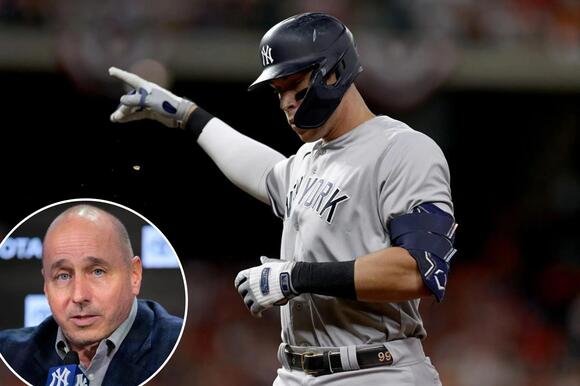 SAN DIEGO — Brian Cashman and the Yankees are like the rest of baseball: They are still waiting on Aaron Judge.

Cashman arrived at the winter meetings on Monday and said he had a conversation with Judge’s agent, Page Odle, earlier in the day, but still had no indication whether the biggest free agent of the offseason was going to remain in The Bronx.

The Yankees are believed to have made an offer of about eight years and $300 million and while Cashman wouldn’t confirm those numbers, the general manager said he’s made “a number of offers” since the season ended and the “offers are a lot different” than the seven-year, $213.5 million extension Judge rejected on Opening Day.

Now, the Giants, with whom Judge met in San Francisco last month, are seen as the most obvious threat to steal the slugger.

“We are negotiating hard,” said Cashman, who added that managing general partner Hal Steinbrenner is “putting his money where his mouth is.”

But that, Cashman conceded, “doesn’t guarantee anything.” 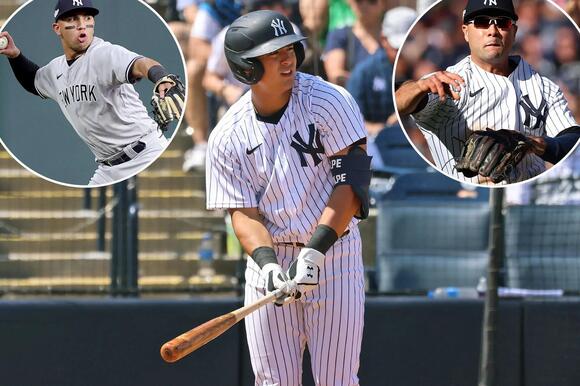 Yankees planning to have ‘open competition’ at shortstop for now

And he also said that Judge’s camp has given the Yankees no indication they will come back to them before Judge makes a final decision.

And while the negotiations continue, at least some of the Yankees’ offseason plans are on hold, since they need to know how much money — if any — they need for Judge or if it will go elsewhere. For now, Cashman said he’s not putting a deadline on when he needs a decision from the outfielder before he needs to look elsewhere.

“You’ve seen in the last 48 hours, people start to make decisions,” Cashman said of the top free agents such as Jacob deGrom to Texas, Justin Verlander to the Mets and Trea Turner to the Phillies.

“It’s not like we missed time, in my opinion, but I understand the longer things go, the more at risk you are,” Cashman said. “It’s easier if we are driving it. We’re not driving it. … He’s got a lot of leverage and he’s earned that right.”

Zaidi said the team has “really strong interest” in Judge and the outfielder’s visit with the team was “really productive.”

It’s unknown whether Judge has met with any other teams.

MLB.com reported Monday that Judge was expected to attend these meetings at the Grand Hyatt on Tuesday, but someone close to Judge said Monday night that Judge “was not coming at this time.”

Aaron Boone said he spoke to Judge recently, but not about free agency — and he was also unsure of Judge’s plans.

Judge was in Tampa on Monday night, at the Buccaneers-Saints game at Raymond James Stadium, and spoke with star quarterback Tom Brady in the tunnel before the game.

“If Judge signs somewhere else, do we pivot and do something else?,’’ Cashman said. “Do we remake ourselves completely? I have no idea. It’s not what we want to do.”

They want to keep Judge, who set the American League record with 62 homers last season.

Turner, a little over a year younger than Judge, signed an 11-year, $300 million deal with the Phillies on Monday.

How that impacts the length of Judge’s deal — if at all — remains to be seen and there is a belief the Yankees would go to a ninth year to retain Judge — much like they did three years ago when they signed Gerrit Cole.

“We’ll see how it all plays out,” Cashman said. “The way this winter is gonna play out could take us down a lot of different roads we didn’t expect. My phone has been a lot more active the last five days than [before]. Things were developing slowly and now they’re opening up a little bit.”

Former second baseman Jeff Kent has been up for Hall of Fame consideration for a decade, with this year marking his last crack at induction via the Baseball Writers Association of America. Kent received 46.5% of the vote during this cycle, well shy of the 75% needed for induction. He falls off the ballot and will no longer be considered by the BBWAA.
2 DAYS AGO
New York Post

‘Japanese ace’ Kodai Senga will be talk of Mets this spring

The Mets have five veterans in their starting rotation, but only four of them are known quantities.  When spring training commences in Port St. Lucie, Fla., in 2 ½ weeks, much of the curiosity will revolve around the “wild card” of the group, Kodai Senga, the Japanese ace whom the Mets signed last month to a five-year contract worth $75 million. Senga, who will turn 30 on Monday, will join Justin Verlander, Max Scherzer, Jose Quintana and Carlos Carrasco to give the Mets a deep and experienced rotation. In an effort to get a jump on understanding Senga, pitching coach Jeremy Hefner,...
QUEENS, NY・3 HOURS AGO
New York Post

The Angels were having a great winter, with one prescient, cost-efficient player move after another (by this winter’s pricey standards) — adding Tyler Anderson, Carlos Estevez, Hunter Renfroe and others for under $100 million. Then team owner Arte Moreno dropped the bomb. He abruptly changed his mind and is staying as owner.  And so, with that one unexpected call, the chances the Angels keep two-way superstar Shohei Ohtani — which is what matters to Orange County baseball now — very likely dropped from not too great to even less great.  One rival flat-out says: “The chance of him being an Angel on...
ORANGE COUNTY, CA・6 HOURS AGO
New York Post

It’s a mystery why some fine lefty relievers Andrew Chafin, Matt Moore, Brad Hand and Zack Britton are still looking for jobs. “Strange,” one executive called the remaining market glut.  Michael Wacha and Zack Greinke are the top two starting pitchers still free. Wacha is seeking a two-year deal. Greinke has been negotiating with his old Royals team all winter.  There are still some starting-caliber shortstops left — including Elvis Andrus and Jose Iglesias. In the outfield there’s Jurickson Profar and David Peralta.  The Twins are viewing Carlos Correa’s deal as a 10-year, $270 million deal, at least for now (though we know...
4 HOURS AGO
New York Post

The 2022 NFL season took an emotional and physical toll on Buccaneers quarterback Tom Brady. In a new report published Thursday by ESPN’s Jeff Darlington, the 45-year-old Brady is said to have lost 15 pounds during the season, which saw his Buccaneers struggle throughout, all while coping with his divorce from wife Gisele Bündchen. “When Brady sat quietly at his locker after an Oct. 27 loss to the Ravens, marking his first three-game losing streak in two decades, the truth of his pain would be revealed the following morning,” Darlington detailed in his report, referencing Brady’s social media statement confirming that the...
TAMPA, FL・8 HOURS AGO
New York Post

Jason Kelce isn’t against trash talk by any means. He is, however, when it’s towards a foe such as Dexter Lawrence. Kelce caught his Eagles teammate Brandon Graham targeting Lawrence during the coin toss ahead of their Divisional Round matchup with the Giants. “We running right at you, 9-7,” Graham yelled at the Giants’ star tackle. “And you know not to run this way!” Lawrence, a lover of smack talk himself, gave it right back to his rival. “I want that,” he told Graham. “I want that!” Aware of the damage Lawrence could inflict on him, Kelce revealed Thursday he had some advice for...
PHILADELPHIA, PA・5 HOURS AGO
New York Post

Joe Schoen knew help was needed. He knew his personnel staff had identified players capable of providing that help. He wanted to give head coach Brian Daboll better options. He knew the Giants required an injection of talent in certain areas. But Schoen could not make the moves he wanted to make. The first-year general manager understood what was required, but did not do it. Man, oh man, was that tough on him, especially when the Giants did not win in a four-week stretch and it looked as if the playoff berth they worked so hard to attain might be slipping away. “There...
1 DAY AGO
New York Post

Sauce Gardner is not opposed to the idea of Aaron Rodgers as Jets quarterback. The star defensive back, who just completed his rookie season for Gang Green, appeared on “Fitz and Harry” on ESPN Radio and was asked about Rodgers, who has been linked to the Jets via various tea leaves over the past week. “He’s definitely great. He’s definitely elite,” Gardner said. “He’s been doing it [since] damn near before I was born. I can’t discredit nothing that he do. I’ve seen him do so many good things. He’s a great quarterback for sure.” Asked specifically if he’d want Rodgers on his...
7 HOURS AGO