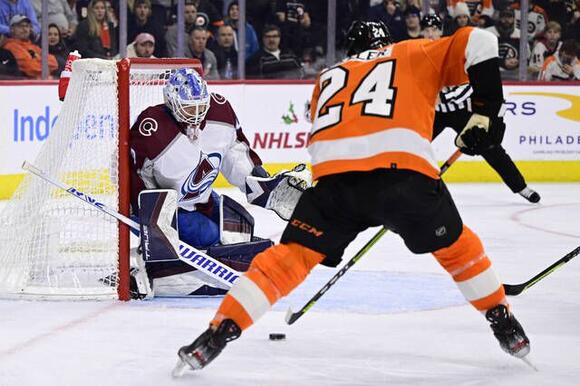 PHILADELPHIA — Tony DeAngelo and Owen Tippett scored power-play goals and the Philadelphia Flyers held on to beat the Colorado Avalanche 5-3 on Monday night.

Tanner Laczynski, Travis Sanheim and Travis Konecny also scored for the Flyers, who won for just the second time in 14 games (2-9-3). Carter Hart finished with 29 saves.

Alex Newhook had two goals and Mikko Rantanen also scored for the defending Stanley Cup champion Avalanche, who lost another player to injury when leading scorer Nathan MacKinnon was hurt in the first period. Alexandar Georgiev had 29 saves.

Rantanen and Newhook scored 36 seconds apart late in the third period to pull the Avalanche within a goal before Konecny’s empty-netter sealed it for Philadelphia.

The Flyers entered converting an NHL-worst 14.1 percent of their power-play chances but went 2 for 3 on the man-advantage.

On the other end, Philadelphia held the Avalanche’s league-leading power-play unit to 1 for 5.

“Guys were making some really good clears and stopping their pressure,” DeAngelo said.

It looked like the Flyers were on their way to an easy win when Tippett put them up 4-1 with 10:06 remaining. But Rantanen deked through several Flyers before beating Hart with 2:13 left, and Newhook got his second of the contest with 1:37 to play on a wrist shot.

“Bent but didn’t break,” Tortorella said. “It’s not so much letting off the gas. There are just a couple plays at the end that are just dumb plays.”

Colorado took the early lead, but then played from behind throughout.

“I thought our guys played hard,” Avalanche coach Jared Bednar said. “We made some mistakes, and they seem to capitalize on them tonight. But the conscience of our team was good.”

After Laczynski took a tripping penalty, Newhook needed just 15 seconds of the Colorado man-advantage to score and give the Avalanche a 1-0 lead 3:50 into the contest. MacKinnon passed to Cale Makar, whose shot from long range was deflected by Newhook past Hart.

It was the team-leading 33rd point for MacKinnon, who entered second in the NHL in assists with 25. But MacKinnon left later in the first period with an undisclosed injury and didn’t return, joining a long list of injured Avalanche. He appeared to get hurt on a check by Scott Laughton near the Flyers bench.

Sanheim answered a little more than 4 1/2 minutes later with his third of the season on a hard wrist shot from the high slot high over Georgiev’s left shoulder. Rantanen broke his stick on the shift and was hustling to the bench for a replacement when Sanheim scored.

“Obviously, a big goal,” Sanheim said. “I thought we handled it pretty well after that.”

The Flyers scored the only goal in the second period when they outshot Colorado 12-5 as DeAngelo converted a rare Philadelphia power-play goal on a wrist shot from long range 3:59 into the period.

Tippett gave Philadelphia more than one goal on the power play in a game for the first time this season when ended a seven-game points drought with his seventh of the season midway through the third.

BOSTON — Reilly Smith scored the only goal of the shootout in the fifth round to give Vegas a 4-3 win in coach Bruce Cassidy’s return to Boston on Monday night, snapping the Bruins’ NHL-record 14-game home win streak to open the season.

The 57-year-old Cassidy was fired by Boston following 5 1/2 seasons in June after the Bruins were eliminated in the opening round of the playoffs. Eight days later, he was hired by Vegas.

Vincent Trochek had a goal and an assist, and Braden Schneider and Adam Fox also scored for the Rangers, who won for the second time in seven games (2-4-1) and snapped a four-game skid (0-3-1) at home. Artemi Panarin had two assists, Lafrenière added one, and Igor Shesterkin made 25 saves.

Jordan Kyrou had a goal and an assist, and Pavel Buchnevich, Vladimir Tarasenko and Ryan O’Reilly also scored for the Blues, who have lost six of seven since a seven-game winning streak. Jordan Binnington had 18 saves.

Lafreniere scores in OT to lift Rangers over Flames

NEW YORK — Alexis Lafreniere scored 1:37 into overtime and Jaroslav Halak made 28 saves as the New York Rangers beat the Calgary Flames 5-4 on Monday night. Lafreniere led a 2-on-1 rush and then tracked down a rebound, beating Flames netminder Jacob Markstrom for his seventh goal of the season. That ended a frenzied game that was tied four times and featured several fights following huge hits — two by Rangers captain Jacob Trouba.
NEW YORK CITY, NY・19 HOURS AGO
Times Leader

PHILADELPHIA — Bo Horvat had a new look in his first game with his new team. Yes, of course, the Islanders jersey took some getting used to — Horvat said he was “really nervous” ahead of his debut — but so did New York’s ban on facial hair.
ELMONT, NY・20 HOURS AGO
Times Leader

SUNRISE, Fla. — Bruce Cassidy’s Vegas Golden Knights lost eight of 10 games going into the All-Star break after leading the Pacific Division at the midway point of the NHL season. They’re still safely in a playoff spot in the Western Conference, but they can’t keep it up....
BOSTON, MA・2 DAYS AGO