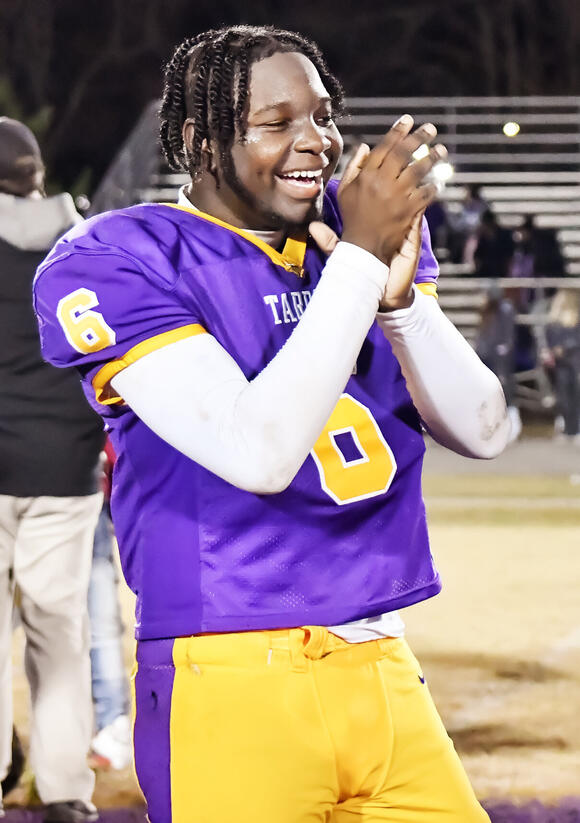 The song “You Need A Ride to Raleigh” by the 1970s rock band Nantucket blared out of the press box at Vikings Stadium just seconds after the final whistle on Friday night in Tarboro.

Just a few miles down the road in Red Oak, another celebration, and historic season, is continuing for the Northern Nash football team.

The Vikings (13-1), behind two touchdowns each from Omar Lewis and Mason Satterfield and one from Kamerin McDowell-Moore, pulled away in the second half to defeat Rosewood 35-7 to win the Class 1A East Regional championship and will advance to the 1A state championship game against the Western champion Mount Airy Granite Bears (14-1), who defeated Draughn 35-6.

Meanwhile, just 23 miles away, Northern Nash remained unbeaten (15-0) as a seven-yard touchdown pass from senior quarterback Keno Jones to senior tight end Ashton Rhodes with 58 seconds left proved to be the game-winner as the Knights handed Fayetteville Seventy-First (14-1) a season-ending 23-22 loss in the Class 3A East Regional final.

The Class 1A state finals and Class 3A state finals will be played back-to-back on Saturday, Dec. 10, at Carter-Finley Stadium in Raleigh. The Tarboro-Mount Airy contest will be at 3 p.m. followed by the Northern Nash-East Lincoln game at 7 p.m.

Northern Nash will be making its first appearance in a state title game since 2002.

Tarboro will be returning to the state finals to defend last year’s state 1A title. The Vikings will be playing in their sixth consecutive state championship game and go into the contest having won four of the last five titles, including the last two (one in 1A and one for 1-AA when the playoffs were subdivided).

The Vikings led 15-7 at halftime and then wore down the Eagles in the second half to advance to the 1A title game in Raleigh.

Rosewood (10-5), the No. 3 East seed, took the opening possession and drove from its own 25-yard line to the Tarboro 29 in nine plays, seven of them carries by David Lamm. But Lamm was stopped for just a yard gain on fourth-and-four and the Vikings took over on downs.

The home team used the running of Bruce Shipman Jr., Kamerin McDowell-Moore, Omar Lewis and Mason Satterfield to the Rosewood 18 before coughing the ball up on a fumble.

The Tarboro defense held, however, and forced a punt.

The Vikings then went 46 yards in five plays with Satterfield capping the drive on a 17-yard TD run with 11:42 left in the first half. Jamarion Dozier added the conversion run to make it 8-0.

Rosewood answered with a 54-yard drive in seven plays, the biggest being a 41-yard pass from quarterback Dalton Philippeau to Alex Stroud down to the Vikings’ 7-yard line. Lamm scored three plays later from the 1, and Giovani Rivera’s extra point pulled the Eagles within a point at 8-7 with 7:33 left in the half.

Satterfield raced 75 yards for his first TD, and Cole Craddock’s PAT gave the Vikings a 15-7 edge with 7:12 remaining in the half.

Tarboro dominated the second half on both sides of the ball.

The Vikings took their first drive of the third quarter and marched 74 yards in 12 plays with big runs from Christian Gunter (eight yards), McDowell-Moore (27) and Satterfield (eight). Lewis’ four-yard TD run with 7:04 remaining in the third quarter and Craddock’s PAT pushed the lead to 22-7.

The Tarboro defense forced a Rosewood punt and the Viking offense went back to work, this time going 82 yards in 10 plays.

Shipman, Satterfield and McDowell-Moore shouldered the load, and Lewis finished it off with a two-yard TD run that made it 29-7 after Craddock’s PAT with 51.2 seconds left in the third quarter.

Another three-and-out set up a Rosewood punt and led to the Vikings’ final scoring drive of 66 yards in six plays. McDowell-Moore scored on a 20-yard run around the left side with 7:22 remaining, but behind the play, a scuffle broke out and officials decided to eject Lewis.

However, on Saturday morning, according to Vikings’ assistant coach Ricky Babb, the booking agent who assigned those officials to the game reviewed the game film and said that Lewis would not be ejected.

“He (the booking agent) said that Omar would not be ejected because he did nothing wrong,” Babb said.

That means that Lewis will be able to play in the state 1A championship game this weekend, whereas an ejection would have carried a one-game suspension.

Tarboro finished with a 477-168 advantage in total yards, running 62 plays to just 39 for the Eagles. All of the Vikings’ yardage came on the ground behind Satterfield (15 carries, 191 yards) and McDowell-Moore (16 carries, 151 yards). Lewis added nine carries for 57 yards.

Sixty yards was all that stood between Northern Nash and a spot in the Class 3A state championship game, and the No. 1 East seeded Knights made the final drive of the season on their home field count against the third-seeded Falcons.

A 21-yard pass from Keno Jones to Ashton Rhodes set NN up at the Falcons’ 8-yard line, and on fourth-and-7, Jones rolled to his right and passed to Rhodes, who caught the aerial at the two and made it to the end zone with 58 seconds remaining.

The Knights then came up with a final stop on defense to secure the victory.

The first half proved to be a defensive struggle, even when both teams were able to move the football.

Northern drove to the Falcons’ 1-yard line to start the contest before the drive stalled due to a penalty. The Knights had to settle for a 25-yard field goal from Bryson Jenkins to make it 3-0.

That’s where it stood until halftime.

A one-yard run by Jones with four minutes remaining in the third quarter gave Northern Nash a 10-0 lead.

The teams combined for 35 points in the fourth quarter: 22 by Seventy-First and 13 by Northern Nash.

The Falcons scored on a TD run to pull within four (10-6), then used a 25-yard TD pass from Deondre Nance to Aaron Downing and the two-point conversion to take a 14-0 lead.

Dywhaun Mitchell then broke free for a 37-yard scoring run and Jenkins’ extra point made it 17-14 Knights.

Seventy-First regained the lead with six minutes left on a 25-yard TD run, and the two-point conversion gave the Falcons a 22-17 edge.

But that score left plenty of time for Northern Nash, who were able to take the lead for good.

The difference proved to be the passing game, where Jones threw for 159 yards (which included big pass plays to Randall King and Yasin Davis-McKinney in addition to Rhodes) while Nance finished with 77 yards through the air.