Planet 13: Where you can watch, purchase and soon consume cannabis 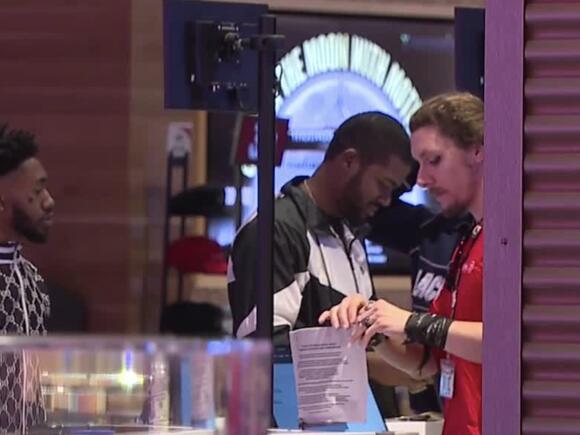 Planet 13, the world’s largest dispensary and SuperStore has received approval for its much-anticipated consumption lounge from the Nevada Cannabis Compliance Board.

The Planet 13 Entertainment Complex will be the first of its kind space where consumers can watch products being made, purchase, and consume all under one roof.

"We're super excited to be awarded the lounge with this process," said Marketing VP David Farris.

Farris said Planet 13 will cater to locals, but, being within walking distance of the Las Vegas Strip, the store's staff expect a flood of tourist customers like Tim Rear and Marcy Dollens-Rear.

"People are going to get it one way or the other. Might as well make it legal," Marcy said.

"It's either going to be black market, or it's going to be legal," Tim said. "One way or the other."

Until the lounges open, there's no reasonable place for tourists to consumer marijuana products legally which motivated the legislature to legalize lounges in the 2021 legislative session.

Before legalization, people were only allowed to consume marijuana within private residences.

"Legalize it and tax it," Tim said, "because it's here anyway. It's that simple."

Farris said, while they are hype for their hemp room, they want to do it in a safe manner.

Planet 13 has established their own academy teaching their more than 100 budtenders and servers to recognize impairment, monitor guests, and prevent intoxicated patrons from driving away.

"For us, this is a new form of business," Farris said, "but it's something we've already put into play and we're excited to execute on any type of education."

Planet 13 was one of 40 applicants selected to receive the first round of licenses by the Nevada Cannabis Compliance Board in November.

"We are thrilled to be moving forward with our plan to bring a world-class cannabis consumption lounge next to the Las Vegas Strip," said Larry Scheffler, Co-CEO of Planet 13. "Planet 13 has always been about offering new and one-of-a-kind immersive experiences for customers. We look forward to once again pushing the envelope and expanding people's minds about what cannabis can be."

The initial plan is to convert Planet 13's expansive Trece restaurant space to the consumption lounge, restaurant and entertainment experience.

Experts say growth at Harry Reid International Airport in Las Vegas is on a trajectory to reach its capacity of between 63 million and 65 million annual passengers by around 2030.
LAS VEGAS, NV・20 HOURS AGO
KTNV 13 Action News

Many Las Vegas residents say they were shocked to see their first utility bill since the January price hike from NV Energy.
LAS VEGAS, NV・7 HOURS AGO
KTNV 13 Action News

The airport handling travelers to and from Las Vegas handled a record 52.7 million passengers in 2022.
LAS VEGAS, NV・16 HOURS AGO
KTNV 13 Action News

Southern Nevada home buyers have been struggling with high rates for the past months, however, rates are showing a decrease that is starting to attract buyers again.
LAS VEGAS, NV・11 HOURS AGO
KTNV 13 Action News

The Durango Casino & Resort is expected to be finished before 2024, according to a Red Rock Resorts executive.
LAS VEGAS, NV・14 HOURS AGO
KTNV 13 Action News

13 Action News sits down with the owner of Black Image Magazine to talk about their story as one of the only Black-owned publications in our city.
LAS VEGAS, NV・2 DAYS AGO
KTNV 13 Action News

Lawmakers in Hawaii will hear about a proposed bill Thursday that would limit how Nevada resort companies can advertise in the Rainbow State.
HAWAII STATE・17 HOURS AGO
KTNV 13 Action News

How a local company is making use of used chopsticks

'Dances With Wolves' actor charged in Canada in 2018 rape

Canadian police say they are pursuing their own sexual assault case against a former "Dances With Wolves" actor.
LAS VEGAS, NV・7 HOURS AGO
KTNV 13 Action News

A look at the past and present of the Historic Westside

13 Action News looks at the Historic Westside of Las Vegas, introducing some key people from the past and present, helping to shape the community.
LAS VEGAS, NV・5 DAYS AGO
KTNV 13 Action News

If you’re looking to say “I do” in Las Vegas, Clark County just made it really convenient to get your marriage license.
CLARK COUNTY, NV・5 DAYS AGO
KTNV 13 Action News

KTNV spoke with parents and teachers about the legislative session that started in Clark County, and how lawmakers need to focus on bettering education.
CLARK COUNTY, NV・1 DAY AGO
KTNV 13 Action News

Snoop Dogg — or, DJ Snoopadelic — will be hosting the grand opening and launch of LP Exotics at the Planet 13 SuperStore and Entertainment Complex, according to a news release.
LAS VEGAS, NV・6 DAYS AGO
KTNV 13 Action News

A man from Wisconsin says it was his first time playing Ultimate Texas Hold'em when he won a jackpot of more than $100,000 at Harrah's Las Vegas.
LAS VEGAS, NV・1 DAY AGO