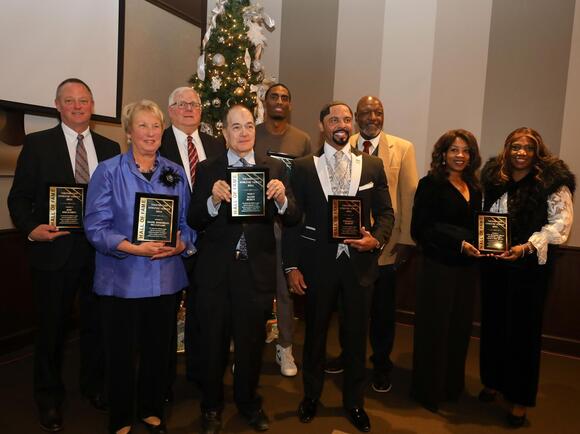 Toledo's most accomplished track and field athlete, the superintendent of Toledo Public Schools, and the creator of the BCSN local sports television network were among those honored Monday night at the Toledo City Athletic League's Hall of Fame dinner and induction held at The Premier.

Kynard, a 2009 Rogers High School graduate, was the gold medalist (following a doping disqualification) in the high jump at the 2012 Summer Olympic games in London, and placed sixth in the 2016 Games in Brazil.

While at Rogers, Kynard was a two-time Division I state champion, setting the Ohio prep record at 7 feet, 3½ inches at the City League meet his senior year.

“I've had a great support system in the city of Toledo, and I'd like to say thank you for that,” Kynard said. “A great deal of my competitive nature came from wanting to live beyond comparison out of nine siblings.

“My dad was a pretty good athlete at Macomber, so I grew up as [Erik] junior listening to the stories that I would try to erase being his namesake. I encourage you all to encourage anyone you come in contact with to not follow, but make a path and lead a trail of their own. Continue to dream.”

Before he earned his doctorate degree in 2007 and became the 30th superintendent of TPS in 2013, Durant was a standout football player at Waite High School, continuing his career at the University of Toledo.

He played on UT's 1995 team, which won a Mid-American Conference championship and closed an 11-0-1 season with a 40-37 overtime win against Nevada in the Las Vegas Bowl. It was the first overtime game in NCAA Division I-A history.

“I tell people every day, my upbringing built me for this,” he said. “Football wasn't just a game for me. My father ended up bringing us to a life where, at the end of the day, myself, I have a doctorate degree, my sister a master's degree, and my brother a degree in journalism.

“I told my father, when he attended my graduation, that he was the true Dr. Durant because he was a doctor of life. His sacrifice was rewarded. Everything was tied to his leadership. His leadership was second to none.”

Block is the chairman and CEO of Block Communications, Inc., the parent company of Buckeye Broadband, The Blade, and the Pittsburgh Post-Gazette. His major impact on the sports programs in the City League and other area high school leagues came when he created BCSN, which launched in 2004. Since then, BCSN has aired thousands of high school games and events from league contests to state championships.

Block spoke of the impact BCSN has had on the Toledo-area community.

“BCSN was an idea I had. The idea was to produce local sports at professional production quality. I had said we have to to produce an event with professional quality at $500 an event.”

Upon being told by a television production person that this was an impossible task at that price, and that $3,000 was more realistic, there was a compromise at $700.

“BCSN started, and you know the rest,” Block said. “It's been a great success, and it shows what's possible. It's added to this community, and it's promoted sports careers. Into college and, in some cases, post-college. Sometimes in this world you just don't let them say no. You have to will it to happen.”

“Toledo has been the core for a lot of great athletes to come from, and I'm just happy to be a part of it,” Ransey said. “I have eight grandkids, and this will be something that they can look back at and say, 'Poppy must've done something when he was younger.' I'll be 58 this year, and I am blessed to be in this position.”

Before girls athletics gained some footing from 1972 federal Title IX legislation, McClellan, a 1965 DeVilbiss graduate, was involved in many club sports, including volleyball and track and field. She excelled in the high jump, clearing 5 feet, 6 inches as a junior when the qualifying height for women in the Olympics was 5-7.

After earning her degree in 1969, she became a health and physical education teacher at Start High School, where she coached the Spartans' first girls basketball, volleyball, track and field, and tennis teams. In 1975, she began what has been a 47-year career as a high school track and field official.

“Being able to start all of these sports [as a coach] was an honor,” McClellan said. “First only comes once, and I encourage all of you to do something first.”

“That day, we did something that had never been done in the history of Rogers High School,” said Perry, speaking for her teammates. “We brought home the first AAA state team championship — in any sport. Seven young ladies brought that back home from Columbus to Toledo, Ohio. Hallelujah!”

In 36 seasons guiding the Central Catholic baseball team, Mielcarek, a 1981 St. Francis graduate, has seen his Fighting Irish teams post a 529-385 overall record. In 2011, he was inducted into the Ohio High School Baseball Coaches Association Hall of Fame.

“My picture might be on the plaque after tonight,” Mielcarek said of his award. “However, without all of our players and all of our coaches at Central Catholic, none of this would have been possible. This is truly a program award, not a Jeff Mielcarek award in any way.”

“I wish that the real reasons that I'm here tonight could be here with me,” Crowell said. “It would be a truckload of young men who, for the most part, did what they were told and played hard. They showed up for three-hour practices on Thanksgiving morning, and the 5:30 practices on Wednesday mornings when they looked terrible on Tuesday night.

“They're the ones that should be up here with me because they're the reason I'm here. The best thing about coaching is that a lot of those guys are some of my best friends today.”