Get the latest news on Gonzaga athletics

Gonzaga pulls ahead late in close-fought win over Kent State 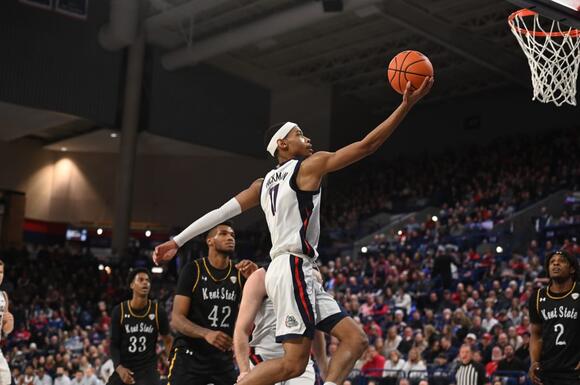 SPOKANE - If the Gonzaga men’s basketball team expected Monday’s game against Kent State to be a break from their grueling nonconference schedule, they were in for a surprise.

Forward Drew Timme led the way for the Zags with 29 points, 17 rebounds and four assists, all team-highs.

Kent State’s highest-scorer was forward Miryne Thomas, who finished with 16 points and shot 4-for-8 from 3-point range.

The Golden Flashes were ahead 66-62 with just under four minutes to play, but Gonzaga regained the lead for a final time after guard Julian Strawther nailed a 3-pointer, followed by a post-spin layup from Timme on the next possession.

Kent State went scoreless for the remainder of the game as the Zags pulled out their 69th consecutive home victory.

The Zags will remain at home to host Washington on Friday and Northern Illinois next Monday. Both games tip off at 6 p.m.

(All photos by Erik Smith)

The Gonzaga men’s basketball team fell four spots to No. 16 in the Associated Press Top 25 Poll released Monday. After a triumphant 88-70 win over Santa Clara at home on Thursday, the Zags (19-5, 8-2 WCC) lost 78-70 on the road to Saint Mary’s on Saturday. The Gaels improved to No. 15 in the poll ...
SPOKANE, WA・1 DAY AGO
GonzagaNation.net

The Gonzaga Bulldogs were rolling in the first half of their top-25 showdown with Saint Mary's on Saturday night. The Zags made several impressive defensive plays, but none bigger than Hunter Sallis' block. Up 21-13 with 8:26 remaining in the first half, Sallis chased down SMC's Logan Johnson on a ...
SPOKANE, WA・2 DAYS AGO
GonzagaNation.net

Aidan Mahaney is making a case for being named the West Coast Conference Player of the Year. A 6-foot-3 freshman guard, Mahaney was unstoppable when it mattered Saturday night, leading No. 18 Saint Mary’s to a 78-70 overtime victory over No. 12 Gonzaga. Mahaney's offensive outburst helped Saint ...
SPOKANE, WA・2 DAYS AGO

Get the latest news on Gonzaga athletics