We're the news team that is Working for Hawaii. KHON2.com has the latest Hawaii news, weather, sports and video.

Navy not releasing video of toxic foam spill to public 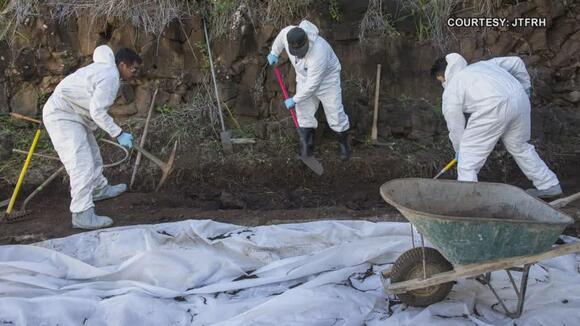 HONOLULU (KHON2) — Video of the toxic foam spill at the Red Hill Fuel Storage Facility will be shared with the Hawaii Department of Health and the Environmental Protection Agency. But, the navy said it is not releasing it to the public. That’s not sitting well with other agencies, including the health department.

Officials initially said there was no video of the 1,300 gallon spill of the foam called AFFF at Red Hill. But now say there is one that will be shared with DOH and the EPA.

In a statement, the Navy said, “The video and other evidence will not be released publicly at this time as doing so may impact the integrity of the investigation.”

Critics question how releasing the video can harm the investigation.

“What’s done is done. The video won’t change if members of the public see it,” said Wayne Tanaka, director of Sierra Club of Hawaii.

Even the health department is critical. In a statement, a spokesperson said it is consulting with the state Attorney General because the Navy has offered DOH to view the video at a military facility instead of sending a copy.

DOH adds, “It is also imperative that the Joint Task Force makes the video available to the public as soon as possible in the interest of honesty and transparency.”

The Sierra Club says it should be done right away.

“Minutes count and they need to stop foot dragging and just give us all the information that they have available so that we can all work together to prevent any further harm,” said Tanaka.

AFFF is used to extinguish fuel fires and contains PFAs, known as forever chemicals which can cause cancer. The Navy had pledged to be more transparent after jet fuel spilled into the drinking water last year.

In a statement, the Board of Water Supply said, “This decision is not in keeping with the Navy’s promise to increase transparency and improve public confidence. The video is information critical to our understanding the impact of the AFFF incident to our sole source aquifer now and into the future.”

We’ve reached out to the Navy for an explanation on why releasing the video would harm the investigation. But, there’s been no response.

The Hawaii Department of Agriculture got a call from a Waimanalo landowner searching for answers after mulch was dumped on his property. he said it was infested with coconut rhinoceros beetle larvae.
WAIMANALO, HI・3 DAYS AGO
KHON2

What is P-EBT and who qualifies for it?

For the 2022-2023 school year, some schools and children may be eligible to receive P-EBT benefits when COVID-19 disrupts normal classes.
HAWAII STATE・1 DAY AGO
KHON2

A newly released biosecurity exhibit is now up in the Mauka Concourse in terminal one at the Honolulu international airport.
HONOLULU, HI・2 DAYS AGO
KHON2

Health professionals at Hawai’i Pacific Health said heart disease is the number one cause of death in America; and most cases are preventable by exercising regularly, keeping a healthy diet and not smoking.
HONOLULU, HI・1 DAY AGO
KHON2

As some states in the U.S. move to institutionalize hate and oppression, Hawai'i is set to be one of the most proactively supportive states for LGBTQ2+ citizens.
HAWAII STATE・2 DAYS AGO
KHON2

Changes could be coming to the annual car safety check

One proposes to flat-out end safety checks, while another bill suggests changes by not requiring safety checks for the first five years of new cars.
HAWAII STATE・3 DAYS AGO
KHON2

It has been a wet start to the weekend for the western half of Hawaii, especially in Kauai County.
KAUAI COUNTY, HI・1 DAY AGO
KHON2

Visitors would have to shell out $50 to visit State beaches, hiking trails and parks if a bill making its way through the Legislature is passed.
HAWAII STATE・4 DAYS AGO
KHON2

‘Guilt tipping’ in Hawaii: Do you tip for takeout?

"Should I just leave that person a 10% or just a few dollars? That's an option but it's not mandatory," said Sheryl Matsuoka, Hawaii Restaurant Association executive director.
HAWAII STATE・2 DAYS AGO
KHON2

According to Business Insider, Hawaii has the highest cost of eggs in the nation by a wide margin at $9.73 per dozen.
HAWAII STATE・4 DAYS AGO
KHON2

A Kansas House bill calls for a tax on public EV charging—but not home charging.
KANSAS STATE・21 HOURS AGO
KHON2

This is in response to a Hawaii Supreme Court ruling that says preliminary hearings are no longer valid for charging serious crimes and indictments from grand juries are needed.
HAWAII STATE・3 DAYS AGO
KHON2

Hawaii has one of the highest costs for childcare

A new study ranked childcare costs in all 50 states and found Hawaii families spend a large portion of their income on childcare.
HAWAII STATE・3 DAYS AGO
KHON2

Hawaiian vocabulary relative to your home

In Hawaiian language, when describing something, the noun is always stated first then followed by the adjective.
HAWAII STATE・4 DAYS AGO
KHON2

Two men are dead after a crash in South Kohala on Sunday, Feb. 5, according to Big Island Police.
12 HOURS AGO
KHON2

Road reopened to traffic after main break in Waimalu

According to the Board of Water Supply, all eastbound lanes of Kamehameha Highway between Kaonohi Street and Pali Momi Street.
WAIMALU, HI・3 DAYS AGO
KHON2

Sam Choy, a Hawaiian celebrity Chef, makes delicious meals with Living 808 anchor John Veneri and shares his recipes with the community on Sam Choy’s in the Kitchen.
HAWAII STATE・3 DAYS AGO
KHON2

Honolulu (KHON2) – Whether you are participating in a virtual concert or heading out for a night at your favorite venue there is always something to do at the end of the week. Mikey Monis breaks down the trendiest events, every Friday, when What’s Up Weekend airs on Living808.
HAWAII STATE・2 DAYS AGO

We're the news team that is Working for Hawaii. KHON2.com has the latest Hawaii news, weather, sports and video.