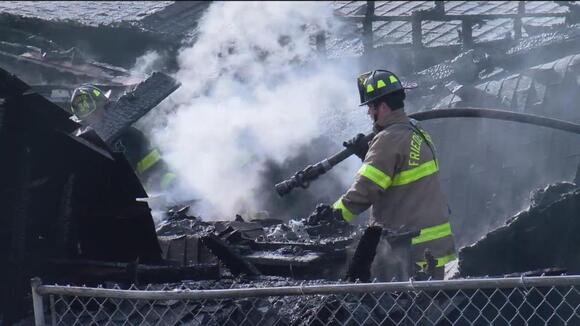 WAYNE TOWNSHIP, SCHUYLKILL COUNTY (WBRE/WYOU) — Dozens of animals were killed in a devastating fire at a local wildlife sanctuary .

Firefighters responded to the Red Creek Wildlife Center in Wayne Township, near Schuylkill Haven in Schuylkill County, around 8:00 a.m. Monday morning for a report of a fire.

“Kailey calling me telling me that Red Creek was on fire,” said Peggy Hentz, Executive Director and Founder of Red Creek Wildlife Center.

For Hentz, Monday morning was off to an unimaginable start.

A fire broke out at the sanctuary in Wayne Township around 8:00 a.m.

Multiple fire crews in Schuylkill County responded. Firefighters say the smoke was seen from miles away.

Once the fire was controlled firefighters tore through the wreckage.

Hentz says all of the animals in the clinic under temporary medical care died.

“Buildings can get rebuilt. I am glad the people are fine, we lost some animals and that is just heartbreaking,” Hentz said.

“It’s a loss to the community cause it’s the wildlife center and everything so that’s a big loss for them, I know they’ve been here for a long time,” Assistant Fire Chief of the Summit Station Fire Company Rory Gauche explained.

Red Creek has been a staple in the community for more than 30 years.

The wildlife center opened in 1991, giving second chances to Pennsylvania wildlife through rescue and rehabilitation.

The nonprofit is now looking for a second chance of its own.

“We are actually in a building project for a new building,” said Hertz.

Plans to rebuild may have to be sped up to continue to save animals and the community.

“If the service didn’t exist, and someone finds a wild animal, they want to help it and they’ll take it in their own home, which isn’t good for the animal to be cared for if somebody doesn’t know how to. It’s also not good for the family because wild animals are unsafe and they can carry diseases and parasites that can affect people,” Hertz said.

The exact number of animals killed in the fire has not been released. The Red Creek Wildlife Center is accepting donations .

A Pennsylvania State Police Fire Marshal has determined the fire to be accidental. State police estimate the fire caused over $50,000 worth of damages to the wild life center.

FOGELSVILLE, LEHIGH COUNTY (WBRE/WYOU) — A Lehigh County Community came together to support the families of two fallen firefighters on Saturday. The fundraiser was held at the Arby’s in Fogelsville where 15% of all proceeds went to the families affected by the loss of New Tripoli Assistant Fire Chief Zachary Paris and firefighter Marvin Gruber. […]
LEHIGH COUNTY, PA・7 HOURS AGO
WBRE

Shots fired from a vehicle in Schuylkill County

NORTH MANHEIM TOWNSHIP, SCHUYLKILL COUNTY (WBRE/WYOU)— Police say they are searching for a male who fired shots at another vehicle in Schuylkill County. According to Pennsylvania State Police, two people got in a confrontation on Route 61 near The Freeze and South Greenview Road, in North Manheim Township, around 6:00 p.m. on Friday. Investigators said […]
SCHUYLKILL COUNTY, PA・4 HOURS AGO
WBRE

One injured after Laurel Run crash

LAUREL RUN, LUZERNE COUNTY (WBRE/WYOU) — One person was injured in a Luzerne County crash Thursday night, state police are handling the investigation. According to state police, first responders received a report of a two-car crash with entrapment in the 3300 block of Laurel Run Road around 7 p.m. Crews on the scene told Eyewitness […]
LUZERNE COUNTY, PA・2 DAYS AGO
WBRE

NOXEN TOWNSHIP, WYOMING COUNTY (WBRE/WYOU) — State police are conducting an investigation at a property in Noxen Friday morning. Pennsylvania State Police cruisers have been parked on a property located on Route 29 in Noxen Township, Wyoming County since Thursday afternoon. They were using heavy equipment to dig in an area at the rear of […]
NOXEN, PA・1 DAY AGO
WBRE

Garden of Cedar shares love through hearts in Scranton

SCRANTON, LACKAWANNA COUNTY (WBRE/WYOU) — As February approaches, love is in the air. A Scranton garden is displaying just how big of a heart the community has. A non-profit community garden in Lackawanna County is ready to bloom as spring approaches. A Scranton native decided to plant his roots on Cedar Avenue when he laid […]
SCRANTON, PA・1 DAY AGO
WBRE

TANNERSVILLE, MONROE COUNTY (WBRE/WYOU) — Police are searching for two people who they say stole $1,300 from a store at the Crossing Outlets in Monroe County. According to the Pocono Township Police Department, the two people pictured below are suspects in a retail theft at the North Face store in the outlets. On January 15 police […]
MONROE COUNTY, PA・1 DAY AGO
WBRE

EYEWITNESS NEWS (WBRE/WYOU) — Footage of the fatal injuries Tyre Nichols sustained at the hands of police officers, has been released and many people are reacting. According to officials, Tyre Nichols was a 29-year-old man from Memphis, Tennesee who died three days after he was allegedly beaten by police during a traffic stop, Saturday, January […]
MONROE COUNTY, PA・7 HOURS AGO
WBRE

Interstate 81 will be closed Thursday into Friday

LUZERNE COUNTY (WBRE/WYOU) — PennDOT says there will be a closure on Interstate 81 in the southbound direction Thursday night into Friday morning. According to PennDOT, I-81 South will be closed from 8:00 p.m. to 5:00 a.m. between exits 178 (Avoca) to 175 (Dupont/Pittston) to remove beams from the Suscon Bridge. The detour placed during […]
LUZERNE COUNTY, PA・2 DAYS AGO
WBRE

OLD FORGE, LACKAWANNA COUNTY (WBRE/WYOU) — The family of a Lackawanna County man who went missing six years ago this week is speaking out demanding answers from the police about the investigation. 58-year-old Robert Baron from Old Forge vanished six years ago and his family insists they won’t rest until they get answers and justice. […]
OLD FORGE, PA・2 DAYS AGO
WBRE

BRIAR CREEK, COLUMBIA COUNTY (WBRE/WYOU) — Police arrested a woman they say was found sleeping with the engine running and several bags of meth inside the car. According to Pennsylvania State Police, in December 2022 around 12:49 a.m., troopers saw a car parked in the 2100 block of West Front Street in Columbia County with […]
COLUMBIA COUNTY, PA・2 DAYS AGO
WBRE

PLYMOUTH, LUZERNE COUNTY (WBRE/WYOU) — A local community rallied together Saturday to support a beloved veteran and longtime caretaker of a sacred place. U.S. Air Force Veteran Tom Jesso is a longtime caretaker of Shawnee Cemetery. Jesso has spent his life fighting for his country and the historic graveyard. “He gives back to others every […]
PLYMOUTH, PA・7 HOURS AGO
WBRE

TANNERSVILLE, MONROE COUNTY (WBRE/WYOU) — Police are asking for public help in finding a woman they say stole from the Crossing Premium Outlets. According to the Pocono Township Police Department, on January 21 around 4:00 p.m., the woman pictured below entered the Tommy Hilfiger store at the outlets in Tannersville. Police say while inside the […]
TANNERSVILLE, PA・1 DAY AGO
WBRE

A conversation about community policing

WATSONTOWN, NORTHUMBERLAND COUNTY (WBRE/WYOU) — Police arrested a man they say was found in possession of drugs in Northumberland County. According to the Watsontown Police Department, on January 18 around 8:20 p.m., officers responded to the 10 block of East Fourth Street in Watsontown for a suspicious car. Police say as a result of the […]
NORTHUMBERLAND COUNTY, PA・1 DAY AGO
WBRE

EYEWITNESS NEWS (WBRE/WYOU)— Ice skating is a fun winter sport, but without learning the basic skills and dressing properly, it can be dangerous. There are a couple of indoor ice skating rinks in Luzerne County, but only one outdoor rink and that’s on the Public Square. Eyewitness News stopped by the venue on a very […]
LUZERNE COUNTY, PA・2 DAYS AGO
WBRE

SCRANTON, LACKAWANNA COUNTY (WBRE/WYOU)— Scores of young people spent their Saturday at a local college, but it was not what you may think. They were there to earn some awards at an event that’s been held for nearly a quarter century. Kids are told all the time not to play with fire but in this […]
SCRANTON, PA・7 HOURS AGO
WBRE

NESCOPECK, LUZERNE COUNTY (WBRE/WYOU) — Parents from two local elementary school communities rallied together in the hopes of preventing their schools from closing. The future is uncertain for both Nescopeck and Salem Elementary Schools. Thursday night, parents and concerned citizens of the district gathered to share their thoughts and concerns before the next scheduled school […]
NESCOPECK, PA・2 DAYS AGO
WBRE

WILKES-BARRE, LUZERNE COUNTY (WBRE/WYOU) — The recent sudden cardiac arrest of NFL player Damar Hamlin brought increased attention to the importance of automated external defibrillators. So much so, that it caught the eye of a local state lawmaker. An AED, as it’s called for short, was used almost immediately on Hamlin when seconds counted. That […]
PENNSYLVANIA STATE・1 DAY AGO