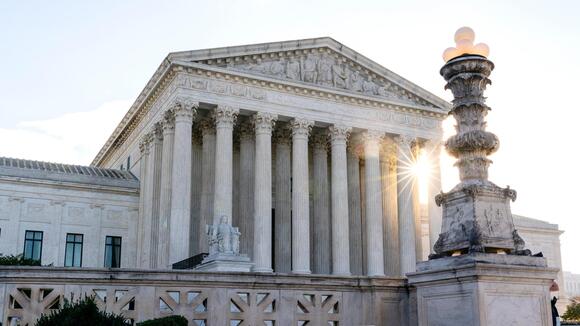 WASHINGTON (Nexstar) – The U.S. Supreme Court is tasked with deciding whether a wedding website designer is allowed to refuse to make websites for same-sex couples.

A crowd gathered outside the Supreme Court on Monday as the justices considered whether anti-discrimination laws violate the First Amendment.

“Colorado is trying to force me to create custom, unique artwork to promote ideas inconsistent with my faith and the core of who I am ,” website designer Lori Smith said.

Smith says Colorado would be violating her freedom of speech if it forces her to create websites for same-sex weddings and she’s asking the Supreme Court to step-in.

“It will decide whether the government can respect everyone’s freedom to say what we believe,” Smith explained.

Colorado and the US government argue that the exemption the website designer seeks would result in legalized widespread discrimination.

“And if there were to be a loophole of the kind discussed, people with disabilities, African Americans, Jews, Muslims, others could find themselves without access to the marketplace,” Colorado Attorney General Phil Weiser said.

“They can say on the website ‘we believe in marriage as celebrated in The Bible,’” Weiser said before noting business can’t reject serving certain customers.

“The court has never recognized that exemption and to do so would threaten to core of our Civil Rights laws,” Weiser said.

The US Supreme Court will decide the outcome of the case before the end of the term next summer.

An Erie teen will be spending several years behind bars after a local church was shot up. Deangelo Troop Jr., 17, was sentenced to three and a half to seven years in state prison by Erie County Judge John Mead. Last February, several shots were fired into Holy Trinity Catholic Church during a neighborhood shooting […]
ERIE, PA・2 DAYS AGO
YourErie

On Tuesday, President Joe Biden displayed another instance of questionable behavior. A reporter asked him a question about the end of the U.S. state of emergency, which is set for May 11th.
1 DAY AGO
Business Insider

McKay Coppins, a journalist at The Atlantic, said he was "taken aback" by how often he heard MAGA Republicans say they wish Trump was dead.
MICHIGAN STATE・1 DAY AGO
MsBirgith

A recent NBC poll revealed that 71% of Americans believe the country is headed in the wrong direction. This is a significant increase from previous polls and suggests a growing sense of unease among the American public.
2 DAYS AGO
Business Insider

Last week, lawmakers offered amendments to legislation on the House floor for the first time since May 2016. Democrats say they're into it.
KENTUCKY STATE・1 DAY AGO
Business Insider

An apparent typo in a resolution organizing the committee gives Democrats 9 members on a 12-member committee. The actual plan is to have 21 members.
PENNSYLVANIA STATE・23 HOURS AGO
YourErie

(WJET/WFXP/YourErie.com)– The Pennsylvania State Police have asked for the public’s help in identifying a pair of suspects in a burglary that took place at Smoker Friendly on Buffalo Road early Wednesday morning. According to a release from PSP, two alleged male suspects that are estimated to be in their late teens to early 20s, who […]
ERIE, PA・18 HOURS AGO
YourErie

An Erie man is facing charges Wednesday for allegedly lying about providing a Jeep to a fake raffle winner in the Great Lakes Jeep Jam raffle scam. Preston Devenney, 53, has been charged with a first-degree felony count of dealing in unlawful proceeds and intent to promote, two third-degree felony counts of perjury, and a […]
ERIE, PA・17 HOURS AGO
YourErie

(WJET/WFXP/YourErie.com) — Millcreek Township is buying several properties on West 8th Street for its Presque Isle Gateway District plan. At a special meeting on Jan. 30, the Board of Directors of the Millcreek Township General Authority approved agreements for the purchase and sale of real estate for five West 8th Street properties — Bel Aire […]
MILLCREEK TOWNSHIP, PA・1 DAY AGO
YourErie

(WJET/WFXP/YourErie.com) — Erie could soon be host to cruise ships following approval from the U.S. Coast Guard. Erie County Executive Brenton Davis announced Wednesday that Erie County has received approval from the U.S. Coast Guard Sector Buffalo to welcome cruise ships into its port. City officials told us in October 2022 there is a possibility […]
ERIE COUNTY, PA・21 HOURS AGO
YourErie

(WJET/WFXP/YourErie.com) — Move over Willy Wonka, Meadville soon will have its own chocolate factory. Stefanelli’s Candies is planning to open a 12,000-square-foot operation at 177 Mercer Street in Meadville. (The story was first reported by the Meadville Tribune.) By the most optimistic estimates, the new operation will open in the Summer of 2023, said Stacy […]
MEADVILLE, PA・18 HOURS AGO
YourErie

CAMBRIDGE, Ohio (WCMH) — An offensive guard on the Philadelphia Eagles, who are two weeks away from playing in Super Bowl LVII, has been indicted in an Ohio court on charges of rape and kidnapping. A Guernsey County grand jury indicted Eagles guard Joshua Sills, 25, from Sarahsville, Ohio for one count of rape and […]
GUERNSEY COUNTY, OH・22 HOURS AGO
YourErie

Erie City Council is reviewing 20 applicants, hoping to fill a vacant seat. Each of the six members of the City Council will select five applicants to interview on Thursday, Feb. 9. One of the applicants is former councilwoman Kathy Schaaf, who did not run for a second term in 2021. Schaaf was elected to […]
ERIE, PA・2 DAYS AGO
YourErie

Emergycare in Greenville is mourning the loss of one of their EMT’s. According to the Emergycare Facebook page, EMT Michael Harrington died unexpectedly. Along with his duties at Emergycare, Harrington also worked as an LPN and was attending Butler County Community College. The announcement was made Tuesday and Wednesday Governor Josh Shapiro ordered flags to […]
GREENVILLE, PA・10 HOURS AGO
YourErie

Redevelopment plans in the works for empty Harborcreek K-Mart

New life may be coming to a local plaza that’s been sitting vacant for the past five years. Wednesday morning, Harborcreek Supervisors took steps to begin redevelopment in the K-Mart plaza on Buffalo Road. They are hoping to get an appraisal and an offer to buy the property. One Harbocreek Supervisor said getting the appraisal […]
HARBORCREEK TOWNSHIP, PA・21 HOURS AGO
YourErie

A pedestrian was fatally struck by a vehicle in Warren County Wednesday morning. According to Pennsylvania State Police – Warren, crews were called to the scene at 6:46 a.m. Wednesday along Market Street/SR 62 in Pine Grove Township. The victim, identified as 40-year-old Bryan Steele, of Warren, was walking along Route 62 in the center […]
WARREN COUNTY, PA・18 HOURS AGO
YourErie

Despite some push back opening day for deer season will continue to be the Saturday after Thanksgiving, and Pennsylvania state Senator Dan Laughlin gave his reaction to this decision. The Pennsylvania Game Commission voted unanimously to stick with a Saturday opening day, which was instituted in 2019. State Sen. Dan Laughlin said this decision gives […]
PENNSYLVANIA STATE・1 DAY AGO
YourErie

Big plans in the works for West Eighth and Peninsula properties

There are big plans for the five West Eighth Street properties purchased as part of Millcreek Township’s Presque Isle Gateway project. However, one of the buildings has been part of the community for generations and some people want it saved from the wrecking ball. The Grasshopper Building has been part of the Millcreek community since […]
MILLCREEK TOWNSHIP, PA・16 HOURS AGO