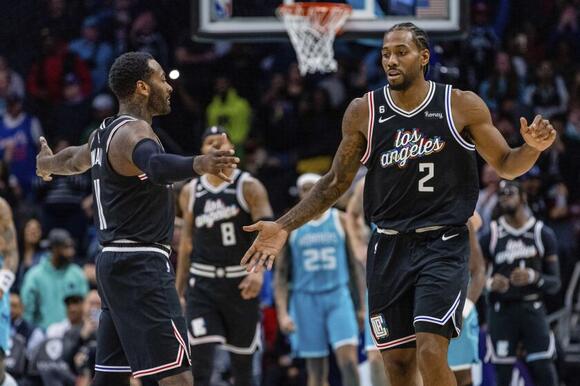 Kawhi Leonard had 16 points, including an 18-foot jumper with 1.4 seconds to lift the Los Angeles Clippers to a 119-117 victory over the Charlotte Hornets on Monday night in his return from a right ankle sprain.

Paul George also came back from a strained hamstring to score 19 points along with seven assists for the Clippers, who snapped a two-game losing streak. Reggie Jackson and Nic Batum each had 13 points, and John Wall added 12 points and 12 assists off the bench.

Luke Kennard added nine points off the bench in his first game back from an injury as well.

Kelly Oubre had 28 points and P.J. Washington bounced back from an 0-for-13 shooting night on Saturday night to add 26 for the Hornets. Washington missed a fadeaway jumper as time expired that would have tied the game.

Harden had 21 points but shot 4 for 19 from the field in his first game since Nov. 2. Coach Doc Rivers said Harden, who spent just more than eight seasons with the Rockets before being traded to Brooklyn in January 2021, would be on a minutes restriction in his return. But Harden didn’t seem to be limited much, and played 39 minutes.

He had missed 14 games with a tendon strain in his right foot. He missed all eight attempts inside the 3-point arc but still got to the line like he always does and made 9 of 10 free throws.

Joel Embiid had 39 points before fouling out late in the first overtime and Tobias Harris added 27 as the Sixers dropped their third straight.

The Mavericks remained in control after a 28-8 run covering most of the last 10 minutes of the first quarter while ending a 10-game, regular-season losing streak against the Western Conference-leading Suns.

Dallas squandered a 22-point lead in the second half of a 107-105 loss at Phoenix in the season opener between teams that met in the West semifinals last season. Dallas won that series last spring with a Game 7 rout on the Suns’ home court.

Deandre Ayton scored 20 points for the Suns, who couldn’t recover from a 15-point first quarter, their lowest total in any quarter this season, as they finished a Texas back-to-back after a blowout victory in San Antonio.

Defensive Player of the Year Marcus Smart scored 18 points for Boston after sitting out Sunday’s win at Brooklyn because of a bruised left hip.

Pascal Siakam scored 29 points, Scottie Barnes had 21 and Gary Trent Jr. 20, but Toronto lost for the first time in four home games. The Raptors are 9-3 north of the border this season.

A second-round draft pick, Nembhard made a key 3-pointer with 4:26 to go and another jumper less than two minutes later. Indiana played without starting point guard Tyrese Haliburton for a second straight game as he nurses soreness in his left groin.

Klay Thompson scored 28 points and made eight 3-pointers on the six-year anniversary of his 60-point masterpiece against the Pacers.

Thompson finished 9 of 23, but Stephen Curry was held to 12 points on 3-for-17 shooting. Jordan Poole scored 23 starting in place of Andrew Wiggins as he sat out with tightness of the adductor muscle in his right leg.

Antetokounmpo, Sandro Mamukelashvili and Holiday hit 3-pointers on a 16-0 Milwaukee run midway through the first half while Orlando went scoreless for 5 1/2 minutes. The spurt left the Bucks with an 11-point lead that they stretched to 15 midway through the period.

Santi Aldama added 18 points and Dillon Brooks finished with 17 for Memphis, which played without leading scorer Ja Morant and several other key players.

Tyler Herro led the Heat with 23 points and 13 rebounds. Jimmy Butler, who had only one field goal in the first half, scored 18, and Caleb Martin finished with 16 for the Heat.

Both teams entered the game having won four of their previous five games, and that included a Memphis win over Detroit on Sunday. But playing the second night of a back-to-back meant several Grizzlies, in addition to Morant, were unavailable. Three of the five most recent starters — Morant, Jaren Jackson Jr. and John Konchar -- were out, leaving a load of minutes for reserves and two-way players.

ATLANTA (AP) — Shai Gilgeous-Alexander scored 35 points, Josh Giddey had 12 of his 17 points in the final period, and Oklahoma City overcame a 14-point deficit in the third quarter to beat Atlanta.

Dejounte Murray finished with 24 points and Trae Young had 23 points and 10 assists for the Hawks (13-11), who have squandered six double-digit leads this season. They began the night tied for second-most in the NBA in that category.

In winning its third straight, Oklahoma City (11-13) has outscored its last three opponents 106-68 in the fourth. The Thunder trailed 88-84 entering the final period.

Giddey’s three-point play early in the fourth made it 91-90 for the Thunder’s first lead since late in the first. They never trailed again as Gilgeous-Alexander, the league’s third-leading scorer, kept hitting free throws down the stretch. He scored 12 points in the fourth and finished 15 for 15 from the foul line.

Former Hornets owner Bob Johnson admitted that selling the franchise was one of his big regrets.
CHARLOTTE, NC・22 HOURS AGO
San Diego Union-Tribune

Giannis Antetokounmpo had 41 points, 12 rebounds and six assists and the Milwaukee Bucks fended off Indiana's second-half rally to beat the Pacers 141-131 on Friday night
INDIANAPOLIS, IN・8 HOURS AGO
San Diego Union-Tribune

Analysis: It may be time to re-think NBA All-Star voting

Dallas Mavericks star Luka Doncic will miss a game at Utah after spraining his left ankle against Phoenix in the opener of the two-game trip
DALLAS, TX・11 HOURS AGO
San Diego Union-Tribune

The NBA has fined Stephen Curry and Joel Embiid $25,000 apiece for actions on the court
PHILADELPHIA, PA・9 HOURS AGO
San Diego Union-Tribune

Adrian Kempe had a short-handed goal and an assist, Pheonix Copley made a career-high 41 saves and the Los Angeles Kings held on to beat the Florida Panthers 4-3 for their third straight win
LOS ANGELES, CA・8 HOURS AGO
San Diego Union-Tribune

Alex Ovechkin scored his 32nd goal of the season, Nicklas Backstrom had the shootout winner and the Washington Capitals beat the Pittsburgh Penguins 3-2 on Thursday night.
PITTSBURGH, PA・1 DAY AGO
San Diego Union-Tribune

Jack Hughes scored his second goal of the game 20 seconds into overtime to lift the New Jersey Devils to a 3-2 win over the Dallas Stars
NEWARK, NJ・6 HOURS AGO
San Diego Union-Tribune