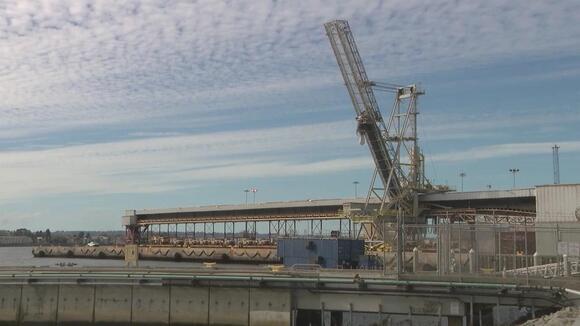 SAN DIEGO — The Port of San Diego is considering a proposal from Mitsubishi Cement Corporation to redevelop a warehouse at the 10th Avenue Marine Terminal in Barrio Logan.

But resident Maritza Garcia says too many are suffering with poor air quality brought on by congestion and pollution from the nearby industry. And now, fears it could soon get worse.

Meli Morales with the Environmental Health Coalition has joined with residents in speaking out against the proposed project.

“It’s going to bring a lot of heavy duty diesel trucks into our neighborhood and it’s already an area that’s overburdened with diesel pollution from heavy truck traffic,” Morales said. “Residents of Barrio Logan and west National City already breathe more polluted air from diesel traffic than 90% of the state. Diesel pollution is responsible for 84% of the cancer risk in those areas.”

The port first heard the proposal from Mitsubishi Cement Corporation more than two years ago. After community backlash, the port directed the company to come up with a new proposal that doesn’t include the use of heavy duty diesel trucks.

But Morales says there’s no indication the company is making changes to reduce emissions such as switching to zero-emissions vehicles.

Dispose of unwanted household items for free on ‘Dump Day’

“To have their project proposal approved by the port as it currently stands would be invalidating the efforts that went into the maritime clean air strategy and would make it really difficult if not impossible for the port to reach their goals of 100% zero emissions vehicles servicing the port by 2030,” Morales said.

It’s unclear when the port will take up the proposal again. Garcia says she and many others in the community will continue to fight back.

“I just want this to be a reminder that we’re not going to stop fighting for what we want to do, which is to have clean air to be able to breathe properly,” Garcia said.

In a statement to FOX 5, Mitsubishi Cement Corporation said in part:

The port was expected to take up the issue next week, but FOX 5 got an update from the port saying discussions continue, but they will not take up the proposal during this month’s board meeting.

It's known as the 'Crown Jewel' of San Diego, but drivers in La Jolla are getting anything but the royal treatment when it comes to the roads. Potholes are plaguing the area.
SAN DIEGO, CA・1 DAY AGO
FOX 5 San Diego

Amtrak has announced they will be reopening their San Clemente track for riders on the weekend as workers continue stabilizing the Orange County passage.
SAN DIEGO, CA・15 HOURS AGO
FOX 5 San Diego

The event, from the County Administration Center, was a historic one as Vargas is the first Latina, immigrant and woman of color to deliver the speech.
SAN DIEGO COUNTY, CA・1 DAY AGO
FOX 5 San Diego

Dog rescued from fall into septic tank in recovery, no broken bones

The German Shepherd who was rescued out of a hole inside a Chula Vista backyard Wednesday is in a specialty animal hospital recovering after the fall.
CHULA VISTA, CA・17 HOURS AGO
FOX 5 San Diego

The San Diego City Council voted Monday to approve the use of a $2.45 million state grant awarded to the city to help house people living in encampments in the downtown area.
SAN DIEGO, CA・3 DAYS AGO
FOX 5 San Diego

Firefighters on Wednesday rescued a dog that fell about 50 feet into a confined space in the Chula Vista area, officials said.
CHULA VISTA, CA・1 DAY AGO
FOX 5 San Diego

Improvements completed on trail from Golden Hill to Balboa Park

A ribbon cutting ceremony Tuesday marked the completion of a project to restore the pedestrian pathway along 26th Street that connects Golden Hill to the south end of Balboa Park.
SAN DIEGO, CA・3 DAYS AGO
FOX 5 San Diego

The City of Chula Vista has a new councilmember after a controversial selection process.
CHULA VISTA, CA・2 DAYS AGO
FOX 5 San Diego

After enduring emotional and often scathing public comment, state regulators on Thursday ordered utilities to immediately distribute funds to lower natural gas bills that have become unaffordable for many Californians this winter. The Climate Credits, which are typically issued in April, will reduce home heating bills by $43 to $56 for most Californians based on […]
SAN DIEGO, CA・23 HOURS AGO
FOX 5 San Diego

A North County beach town has earned some bragging rights as the only city in California to make Forbes Advisor Magazine’s “Best Places to Travel in 2023" list.
ENCINITAS, CA・6 HOURS AGO
FOX 5 San Diego

Missing something? Recover stolen property in San Diego at this public viewing event

Missing something? Detectives with the San Diego County Sheriff's Department will be hosting a public viewing of recovered stolen property this weekend.
SAN DIEGO, CA・1 DAY AGO
FOX 5 San Diego

It’s an issue people are passionate about across San Diego, but Thursday evening the topic of homelessness, and what’s being done about it, came to University Heights.
SAN DIEGO, CA・14 HOURS AGO
FOX 5 San Diego

Sahara Rodriguez, a tenth grader and senior scout in Troop 6105, sold the most cookies out of all the San Diego Girl Scouts, with 8,024 boxes sold.
SAN DIEGO COUNTY, CA・1 DAY AGO
FOX 5 San Diego

A San Diego business is thinking outside the box in order to save some money from all the increased costs associated with a new minimum wage, new tax and an increased utility bill.
SAN DIEGO, CA・3 DAYS AGO