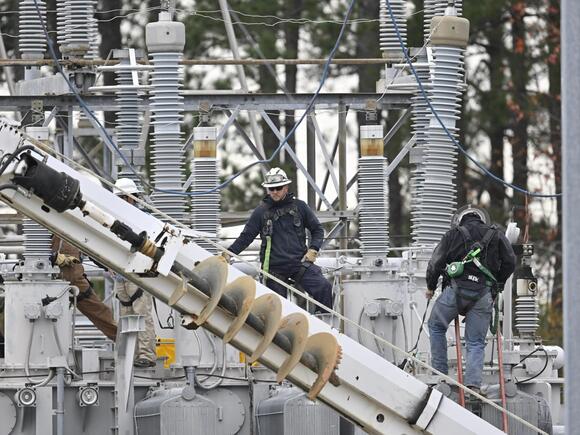 The FBI is joining local and state authorities in investigating purported "intentional attacks" on two electrical substations in North Carolina's power grid that left approximately 45,000 people without power and heat over the weekend.

Sixty percent of North Carolina's Moore County, located about 70 miles southwest of Raleigh, lost power on Saturday night, officials said during a press conference. As of Monday, Duke Energy said it had restored power to about 7,000 customers, but an additional 38,000 remained in the dark and likely will until Thursday.

The Moore County Sheriff's Office said in a Saturday Facebook post that authorities are investigating the incident as a criminal occurrence after evidence indicated that "intentional" vandalism was apparent at multiple sites, including two substations that were damaged by gunfire.

Authorities have not provided any motive for the attack, nor made any arrests, but Moore County Sheriff Ronnie Fields said Sunday that the attack "wasn't random," per The Washington Post. Fields declined to answer reporter questions about whether security cameras caught footage of the vandalism.

Law enforcement said the outages began around 7 p.m. on Saturday. The two substations that were hit are about a 20-minute drive from one another, Maj. Andy Conway of the Moore County Sheriff's Office told The Post, in the towns of Carthage and West End.

A spokesperson for Duke Energy told the outlet that multiple pieces of equipment were damaged at both locations, including a gate at one substation.

Experts have long warned about the vulnerability of the nation's electricity infrastructure , saying the the US power grid could be a prime target for domestic attacks.

CNN chief law enforcement and intelligence analyst John Miller said these types of attacks have been a national concern for years, given the decentralized nature of the American electrical grid.

"The challenge is most of these places are outdoors, most are in remote areas and most of them are available for attack from a long distance," Miller said on "CNN This Morning."

The Saturday attacks come just one week after the Department of Homeland Security renewed a January bulletin warning that the US electric power infrastructure is an "attractive target" for domestic extremists.

Miller suggested on CNN that the perpetrator's aim may have been to cause chaos, which the Saturday outage has certainly done: Moore County declared a state of emergency in response to the attacks; issued a 9 p.m. curfew; and kept schools closed on Monday.

Well, if the FBI is involved, I’m sure the findings will be that THE SHOOTER will be a MAGA supporter and It was carried out by an “assault weapon.” Not a sick individual!!!! Furthermore, hide this unfortunate event like they hid Biden’s involvement in Ukraine instead of promoting other sick individuals from repeating this domestic terrorist attack on the red, white and blue. Thrill seekers love a good thrill.

CNN's Nick Valencia reports on the arrest of 5 Memphis police officers charged in the death of Tyre Nichols and speaks with Bennie Cobb, a family friend of one of the officers.
MEMPHIS, TN・5 DAYS AGO
Eden Reports

On Tuesday, President Joe Biden displayed another instance of questionable behavior. A reporter asked him a question about the end of the U.S. state of emergency, which is set for May 11th.
15 HOURS AGO
Eden Reports

On Sunday, Maria Bartiromo reported during a Fox News Sunday Morning Futures segment that there are 1,850 boxes filled with classified documents that President Joe Biden donated to his home state's university.
2 DAYS AGO
The Hill

There has been substantial media coverage of President Biden and former Vice President Pence both removing marked classified documents outside the White House after they left the vice presidency (and, in the case of Biden, also including after he was a U.S. senator). Both insist they did so inadvertently.   Of course, the word “inadvertent” does not apply to former President Trump’s behavior. As we now know from Mr. Trump’s own admission, he knew documents he took to Mar-a-Lago were classified…
WASHINGTON STATE・1 DAY AGO
Insider

Protests erupted in 2018 when a judge found Mark Daniel Lewis had no criminal guilt over the death of his date Kenne McFadden, a transgender woman.
1 HOUR AGO
Insider

People should 'immediately' stop using eyedrops that may be linked to one death and vision loss in an outbreak across 11 states, the CDC says

The CDC found a drug-resistant germ in samples from 50 people. Most had used EzriCare Artificial Tears.
CONNECTICUT STATE・1 HOUR AGO
NBC News

One person has died and at least three others are left with permanent vision loss because of a bacterial infection possibly linked to a brand of over-the-counter eyedrops, according to the Centers for Disease Control and Prevention. A majority of those affected reported using preservative-free EzriCare Artificial Tears before becoming...
17 HOURS AGO
Insider

Police allege Benjamin Obadiah Foster is using dating apps to find potential victims or people "who may be lured into assisting" with his "escape."
21 HOURS AGO
Insider

Astiyazh Haghighi, 21, and her fiance, Amir Mohammad Ahmadi, 22, were filmed dancing romantically in front of Tehran's Azadi Tower.
5 HOURS AGO