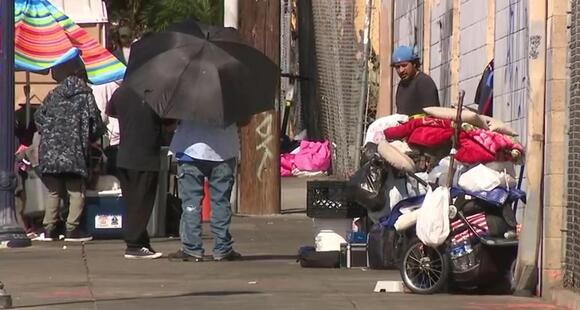 In downtown San Diego alone, 1,706 unsheltered are estimated to be living on the street, in tents and in cars.

The partnership also breaks down the number by location within downtown, as follows:

A representative from San Diego Mayor Todd Gloria’s office said in a statement:

“Since day one, Mayor Gloria has been unwavering in his focus to get people off the street. The Mayor has dramatically expanded the city’s homelessness response system – more so than any other administration prior. This includes opening new homeless shelters, increasing the availability of homeless beds by 40%, and creating more places for people to go who are living in their cars,” stated Dave Rolland, Deputy Director of Communications for Mayor Todd Gloria’s office in an emailed statement Monday afternoon.

The mayor’s team claims that “while the city is successfully getting people off the street and into permanent housing every day, the fact remains that more people are falling into homelessness than the region’s homelessness response system can serve.”

“As the Regional Task Force on Homelessness recently reported, for every 10 people that we house in our county, 13 fall into homelessness due largely to sky-high housing costs. The Mayor intends to make an announcement about policies to address this in the coming days. He remains committed to the ultimate goal that ends homelessness: a roof over the head of every San Diegan at a price they can afford,” Rolland said.

Bob McElroy, president of the Alpha Project, says that he has spent the last three decades getting people off the streets in San Diego.

“I’m always trying to be enthusiastic and positive but wow, even some of our best efforts just don’t seem to be enough,” McElroy said.

McElroy says he feels like he’s swimming upstream with the shelters he operates being full and not enough services.

“My first time in 37 years that I’m feeling down and discouraged, another study just came out in San Diego that shows for every 10 people we get off the streets, 13 more people take their place,” McElroy said. “It just seems like a tidal wave that doesn’t seem to be settling down.”

McElroy said the current situation from COVID, inflation and high rent prices is a perfect storm that many people haven’t been able to weather, which forced them into homelessness.

“The demand is up, the acuity is up, fentanyl is just this tremendously vexing this that we are dealing with all the time now,” Dr. Dunford said.

All three advocates agree something needs to be done, fast.

“If you want to solve homelessness you have to get housing and services for folks,” McConnell said.

If the city would do something about these enormous rent prices maybe there would be less homeless. I agree alot of homeless choose to be there but many have no choice.

The United States sends billions of dollars in aid to other countries but can’t take care of the homeless crisis.

I see quite a few people asking for money at intersections. I'm sure they make a.lot of money. Probably more than some of us make.

Have you been hearing loud booming sounds this past week in the San Diego area? Well, that's because of pre-planned military training exercises, according to San Diego police.
SAN DIEGO, CA・5 HOURS AGO
FOX 5 San Diego

A North County beach town has earned some bragging rights as the only city in California to make Forbes Advisor Magazine’s “Best Places to Travel in 2023" list.
ENCINITAS, CA・18 HOURS AGO
FOX 5 San Diego

The agency got the notice of the funding at the same time Transit Equity Day, in honor of civil rights leader Rosa Parks’ birthday, comes around.
SAN DIEGO COUNTY, CA・2 HOURS AGO
FOX 5 San Diego

Swooning season is here and it's now or never on securing seats at one of San Diego's most romantic restaurants for Valentine's Day. The battle for the hottest tables in town starts now.
SAN DIEGO, CA・11 HOURS AGO
FOX 5 San Diego

Amtrak has announced they will be reopening their San Clemente track for riders on the weekend as workers continue stabilizing the Orange County passage.
SAN DIEGO, CA・1 DAY AGO
FOX 5 San Diego

The event, from the County Administration Center, was a historic one as Vargas is the first Latina, immigrant and woman of color to deliver the speech.
SAN DIEGO COUNTY, CA・2 DAYS AGO
FOX 5 San Diego

It’s an issue people are passionate about across San Diego, but Thursday evening the topic of homelessness, and what’s being done about it, came to University Heights.
SAN DIEGO, CA・1 DAY AGO
FOX 5 San Diego

Missing something? Recover stolen property in San Diego at this public viewing event

Missing something? Detectives with the San Diego County Sheriff's Department will be hosting a public viewing of recovered stolen property this weekend.
SAN DIEGO, CA・1 DAY AGO
FOX 5 San Diego

It's known as the 'Crown Jewel' of San Diego, but drivers in La Jolla are getting anything but the royal treatment when it comes to the roads. Potholes are plaguing the area.
SAN DIEGO, CA・2 DAYS AGO
FOX 5 San Diego

The San Diego City Council voted Monday to approve the use of a $2.45 million state grant awarded to the city to help house people living in encampments in the downtown area.
SAN DIEGO, CA・3 DAYS AGO
FOX 5 San Diego

Skateboarder dies after collision with trolley in Mission Hills

A man who was riding a skateboard died Friday after colliding with a trolley in the Mission Hills area, according to San Diego police.
SAN DIEGO, CA・8 HOURS AGO
FOX 5 San Diego

Sahara Rodriguez, a tenth grader and senior scout in Troop 6105, sold the most cookies out of all the San Diego Girl Scouts, with 8,024 boxes sold.
SAN DIEGO COUNTY, CA・1 DAY AGO
FOX 5 San Diego

First Lady Jill Biden will be making an appearance in San Diego this week with several stops planned at a series of events, the White House said.
SAN DIEGO, CA・1 DAY AGO
FOX 5 San Diego

Named after the popular troupe, Meet Cute Bookshop, located in North Park on 30th Street, is the first and only romance-centered bookstore in San Diego, bringing the world of romance to both avid readers of the genre and newcomers alike.
SAN DIEGO, CA・1 DAY AGO