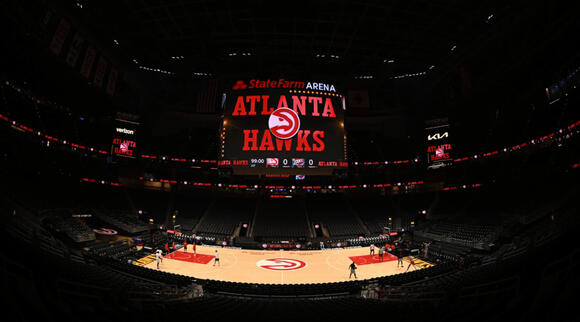 Bally Sports Southeast issued a statement with an update on Bob Rathbun after he appeared to have a medical emergency during the pregame show.

Bally Sports Southeast issued a statement Monday night providing an update on veteran Hawks play-by-play man Bob Rathbun after he appeared to have a medical emergency prior to the Hawks-Thunder game in Atlanta.

“Prior to tonight’s game against the Oklahoma City Thunder, play-by-play announcer Bob Rathbun briefly lost consciousness on the court,” the statement began. “Emergency medical professionals on-site quickly treated Rathbun for dehydration. He is stable, responsive and heading to Emory Midtown for further evaluation.”

The frightening scene took place on air during the pregame show in a segment featuring Rathbun and color analyst and NBA Hall of Famer Dominique Wilkins. Rathbun was reportedly alert while he received treatment from medical staff inside State Farm Arena, per The Atlanta Journal-Constitution .

Rathbun, 68, has worked as a Hawks broadcaster for Bally Sports since 1996.

“You got a $200 million contract, and you want people in the NBA to think you hood, to think you gangster” - Shannon Sharpe calls out Ja Morant over alleged gun incident

Sharpe believes something has to change for Morant, otherwise the Grizzlies star is putting himself in harm's way.
MEMPHIS, TN・1 DAY AGO
Sports Illustrated

Los Angeles made its pitch to try and reunite LeBron James with Kyrie Irving, but Brooklyn rebuffed with a proposal that wasn’t consummated.
BROOKLYN, NY・2 DAYS AGO
Sports Illustrated

Teammates and coaches are mourning the loss of a former collegiate tennis star who died suddenly at the age of 31 over the weekend. Former University of Georgia standout Lilly Kimbell reportedly died on Sunday, according to her family. Kimbell's family says that she had been experiencing kidney issues that led to a heart attack. CPR was performed at her home and she was transported to the hospital, but her family tragically were forced to make the decision to take her off of life support.
ATHENS, GA・8 HOURS AGO
All Seahawks

Things got personal on ‘First Take’ between Smith and Williams.
2 DAYS AGO
Sports Illustrated

Football didn’t work out for Bron Breakker but he’s an emerging star in WWE.
GEORGIA STATE・1 DAY AGO
Sports Illustrated

LeBron’s Record-Breaking Moment Will Be Fit for a King. Kareem’s? It Was, Um, Cute.

James needs just 36 points to eclipse Abdul-Jabbar’s scoring record, a moment that will come soon—and with considerably more pomp and circumstance than in 1984.
UTAH STATE・2 DAYS AGO
Sports Illustrated

Uh, what?
10 HOURS AGO
Sports Illustrated

Los Angeles was able to address its need for shooting, but is it enough for a playoff push?
LOS ANGELES, CA・1 HOUR AGO
Sports Illustrated

It was an audience fit for a king.
LOS ANGELES, CA・1 HOUR AGO
Sports Illustrated

The two-time WNBA champion is adding another item to her list of accomplishments.
SALT LAKE CITY, UT・1 DAY AGO
Sports Illustrated

The Minnesota tight end weighed in on the heartbreaking ending to the team’s 2022 campaign.
MINNEAPOLIS, MN・5 HOURS AGO
Sports Illustrated

Mahomes Shares Heartfelt Message to Brady in Wake of Retirement

The legendary skier is one World Cup race win away from tying Ingemar Stenmark's all-time record.
7 HOURS AGO
Sports Illustrated

Payback may be in order.
KANSAS CITY, MO・7 HOURS AGO