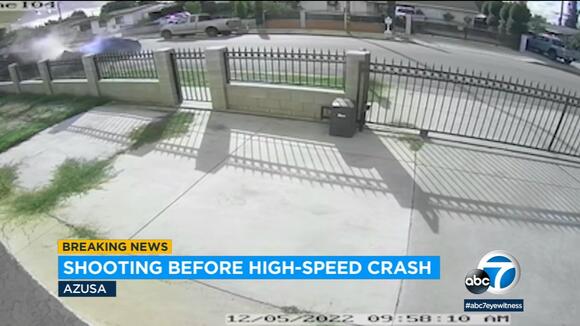 A man died Monday after he was shot and then crashed into a parked pickup truck in a residential neighborhood in Azusa, authorities say. The collision happened at around 10 a.m. in the 17700 block of Newburgh Street. Video obtained by Eyewitness News shows the car traveling at least 50 mph and slamming into the truck parked on the street. The impact then pushed the truck on top of another parked vehicle. Lt. Mike Gomez with the Los Angeles County Sheriff's Department said when detectives responded to crash scene, the driver, who was traveling alone and was described only as a Hispanic male between the ages of 18 and 25, was found with a gunshot wound. He was sent to the hospital where he later died. Gomez said there was a second crime scene about a quarter-of-a-mile away at the intersection of Newburgh Street and Donna Beth Avenue. Investigators believe that's where the victim was initially shot. Steven Jimenez, whose home surveillance camera captured the crash, said he was alerted of the incident by relatives. "I got a call from family members saying that it was urgent that I came home, that there was a car on fire, there was smoke and basically, as you can see in the video, there was somebody speeding ... hit the parked car that was in front of my house," he said. No other injuries reported. The incident remains under investigation.

A standoff at the Commerce Casino involving a man with a knife ended after about two hours with the man being transported to a hospital.
LOS ANGELES COUNTY, CA・8 HOURS AGO
ABC7

Family members of a double-amputee shot and killed by Huntington Park police officers last week after he threatened them with a knife are calling the shooting a murder.
HUNTINGTON PARK, CA・1 DAY AGO
ABC7

Ten-year-old Anthony Avalos looked dead when authorities were called to his Lancaster home in 2018, but his mother didn't appear to be very upset, witnesses testified in the murder trial.
LANCASTER, CA・22 HOURS AGO
ABC7

The city of Monterey Park is thanking the firefighter-paramedics who helped save lives after the mass shooting - and apologizing for not recognizing the trauma they experienced.
MONTEREY PARK, CA・6 HOURS AGO
ABC7

Assault with deadly weapon suspect in custody after chase through LA

A suspect wanted for assault with a deadly weapon was taken into custody after leading authorities on a chase through surface streets and freeways near downtown Los Angeles.
LOS ANGELES, CA・2 DAYS AGO
ABC7

He has a pending case where he's accused of attacking another driver in a road rage incident in Hollywood in January 2020. When his car was searched, he allegedly had steroids and more than $30,000.
LOS ANGELES, CA・2 HOURS AGO
ABC7

Prosecutors played a recording of Heather Barron's first interview with detectives, which was the same day 10-year-old Anthony Avalos was rushed to the hospital in June 2018: "They keep on looking at me like ... if I hurt him, and I didn't."
LANCASTER, CA・1 HOUR AGO
ABC7

A suspect was arrested Monday evening for allegedly trying to squat inside a guest home in Beverly Hills, police say.
BEVERLY HILLS, CA・19 HOURS AGO
ABC7

Police responded to five different gunman scares at Walmart locations in Los Angeles and Orange counties over the last three days, but they all turned out to be hoaxes.
ORANGE COUNTY, CA・1 DAY AGO
ABC7

At least three businesses in Long Beach were targeted in a string of break-ins, one of which was caught on camera. Now, owners are on high alert.
LONG BEACH, CA・22 HOURS AGO
ABC7

One person was arrested for suspicion of felony vandalism and was in possession of spray paint and a glass breaking tool after a protest in Hollywood.
LOS ANGELES, CA・1 DAY AGO
ABC7

A chase involving a motorcyclist ended with a dramatic takedown Thursday night in the streets of Compton.
COMPTON, CA・4 DAYS AGO
ABC7

Three suspects were arrested after another brazen smash-and-grab robbery caught on video inside a Lupita's Jewelers in the Inland Empire.
FONTANA, CA・2 DAYS AGO