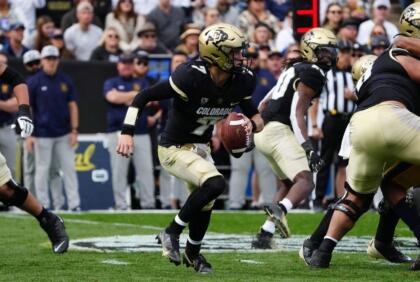 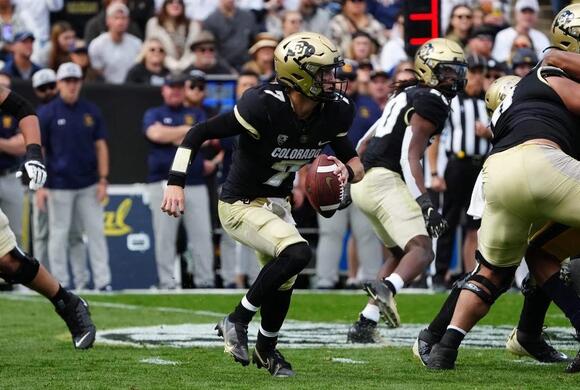 One day after new coach Deion Sanders made clear who his starting quarterback would be in his first season at Colorado, incumbent quarterback Owen McCown entered the transfer portal on Monday.

McCown played in four games as a freshman and started three, completing 57 percent of his passes with two touchdowns and two interceptions. He suffered an abdominal injury during Colorado’s 20-13 overtime win over Cal on Oct. 15 and was not able to return to the field.

That win turned out to be the Buffaloes’ only victory of the season, finishing 1-11 after they fired Karl Dorrell following an 0-5 start. Sanders, the longtime NFL star and former head coach of FCS program Jackson State, accepted the same position at Colorado over the weekend.

At his opening press conference, Sanders introduced his son, Shedeur Sanders, by saying, “And this is your quarterback.” The younger Sanders starred for Jackson State over the past two seasons, racking up 6,614 passing yards and 66 touchdowns.

“I want y’all to get ready to go ahead and jump in the portal and do whatever you’re gonna get because if more of you jump in, the more room you make,” Sanders told players.

“We’ve got a few positions already taken care of because I’m bringing my luggage with me,” he added. “And it’s Louis (Vuitton).”

McCown is the son of Josh McCown and nephew of Luke McCown, two former NFL quarterbacks. He was a three-star prospect coming out of high school.

Seems like the ones leaving are afraid they’ll have to actually work for their scholarship. Honestly, what I personally believe when Coach Prime said…”this is your QB…”, one of the QBs should have said, “he’s gonna have to earn it and take it from me!” Coach Prime is a competitor and everyone on his team will be.. I remember back when Nebraska was great in the Big 8, kids took pride in being a walk-on.. They played just as hard as the starters.. Did they complain? No. So now you have a bunch of spoiled entitled kids that took pride in losing and the new coach isn’t going to allow them to continue that behavior, so now they wanna run.. Oh well, dueces!!

SMH, sad to say, if those kids leave because of comments the coach has made, then they wasn't the type of players that Colorado need in the program, everyone is not accustom to losing, loser lose, and fighters fight, as stated in his meeting the kids, he is going to separate the Janes from the Tarvens, Coach Prime wants dogs not cats

He understood what was said- you had your shot at running the business and ran it into the ground now move out the way because “I’m coming”.

The Arizona Cardinals have been looking to fill their vacant head coach role, and there are loud rumblings of a key reason why it is taking so long to fill. The name that everyone brings up when discussing the issues with the team filling the coaching spot is quarterback Kyler Murray.
16 HOURS AGO
OnlyHomers

The New England Patriots are currently set up well with two young quarterbacks, Mac Jones and Bailey Zappe, who both have winning records as starting quarterbacks during their short tenure in the league.
1 DAY AGO
Sportsnaut

The Chicago Bears are believers in the upside of quarterback Justin Fields and that is why there is a very
CHICAGO, IL・2 DAYS AGO
Sportsnaut

Just 11 days away from Super Bowl LVII, a member of the Philadelphia Eagles roster has been indicted on charges
PHILADELPHIA, PA・2 DAYS AGO
Sportsnaut

The Tampa Bay Buccaneers are right back to square one following Tom Brady’s retirement announcement. Coming off a disappointing 9-8
TAMPA, FL・2 DAYS AGO
Sportsnaut

The Carolina Panthers are under scrutiny for hiring an outside candidate in that of Frank Reich to be their next
CHARLOTTE, NC・2 DAYS AGO
Sportsnaut

Patrick Mahomes didn’t mince words on Thursday when asked about the importance of having two Black quarterbacks start a Super
KANSAS CITY, MO・1 DAY AGO
Sportsnaut

Las Vegas Raiders: Why Derek Carr’s trade value may have reached its peak

The Las Vegas Raiders will likely work up until February 15 in their effort to trade Derek Carr, who has
2 DAYS AGO
Sportsnaut

The Philadelphia Eagles are set to take on the Kansas City Chiefs in Super Bowl LVII after running roughshod through
PHILADELPHIA, PA・1 DAY AGO
Sportsnaut

The Tampa Bay Buccaneers have several decisions to make this offseason after a disappointing 8-9 campaign. Obviously, the focus is
TAMPA, FL・19 HOURS AGO
Sportsnaut

The Denver Broncos made the first real big splash of this NFL offseason, acquiring head coach Sean Payton from the
DENVER, CO・1 DAY AGO
Sportsnaut

What are the biggest blowouts in Super Bowl history? Two teams from a dynastic era of football are on this
9 HOURS AGO
Sportsnaut

The Indianapolis Colts have only made the playoffs twice over the past seven seasons. During that time they’ve gone 45-52-1.
INDIANAPOLIS, IN・1 HOUR AGO
Sportsnaut

Philadelphia Eagles rookie offensive lineman Josh Sills has been indicted on one count of rape and one count of kidnapping
GUERNSEY COUNTY, OH・2 DAYS AGO
Sportsnaut

Red River rivals Texas and Oklahoma are not headed downstream from the Big 12 to the Southeastern Conference until 2025
NORMAN, OK・5 HOURS AGO
Sportsnaut Silver & Black

Prior to his retirement, Tom Brady was set to become an unrestricted free agent for just the second time in
6 HOURS AGO