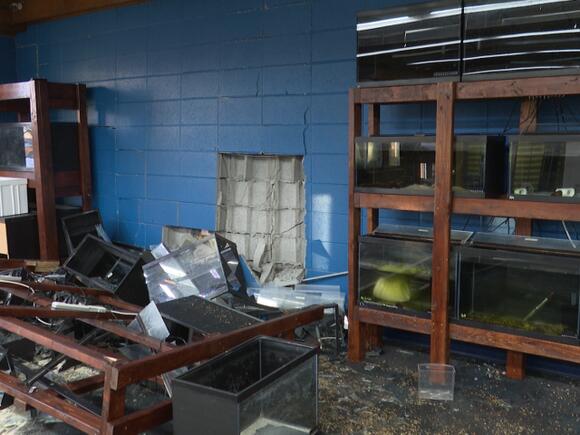 Treasure State Aquariums on Grand Avenue is closed again after reopening three weeks ago after an allegedly impaired driver smashed through the building's west wall around 2 a.m. Friday, knocking down 11 20-gallon fish tanks and spilling water through half of the store.

"This has been a rough year," says Lauren Cardeneaux, who owns and operates Treasure State Aquariums along with her husband, Crowell Cardeneaux.

The Cardeneauxs had just reopened the shop three weeks prior after life threw some major hurdles in their path.

"End of January we found out our baby, little Callahan, wasn't doing so well," Lauren Cardeneaux said. "I was still pregnant at the time and we had to go to Denver and had to be there for several months for him for his medical care."

Upon returning home, the Cardeneauxs focused their time on Callahan, now 10 months old, who is doing much better but had another surgery two days before the crash.

The Cardeneauxs reopened their store in late October, and they are working with insurance agents and contractors to figure out how to repair the damaged west wall and water damage throughout the store to reopen once again.

"Initially we thought a lot of fish had survived. When we got here, there were a lot of fish were on the floor, we got them into tanks, but it wasn't the case when we got here later in the day," Lauren Cardeneaux said. "So it was a pretty devastating loss for animal life that night."

The couple opened Treasure State Aquariums in 2017, selling freshwater fish, tanks, and all of the things you need to build a beautiful aquarium.

In November 2021, the shop was burglarized, and the cash register was stolen.

The Cardeneauxs closed during that time as well until they could recuperate the money and buy a new register.

Looking ahead, the Cardeneauxs are focused on repairing and reopening their shop on Grand, hoping this is the last setback for a business after a year of bad luck.

"I don't want to say I've gotten used to it, but we know we're going to get through it," Crowell Cardeneaux said.

"If we've gotten through the worst with him, the business is just a small thing, we're going to survive and get back into business as soon as we can."

Next thing she knew, the skulls she had painted for her wedding in September 2022 had caught peoples attention.
BILLINGS, MT・14 HOURS AGO
Q2 News

“All of sudden it was this big explosion in the sky and all this debris started slowly coming down like it was big smoke," she said.
BILLINGS, MT・2 DAYS AGO
Q2 News

Tony Seitz started crafting unique beehive boxes after taking up beekeeping with his son. He has been retired since 2009 and enjoys creating the colorful boxes as a hobby.
BILLINGS, MT・4 DAYS AGO
Q2 News

Dolly Moore wrote on Twitter that she saw a jet go by and then heard what she described as an explosion in the sky.
BILLINGS, MT・2 DAYS AGO
Q2 News

In Billings, police issued 268 red light citations in 2022 and 169 warnings, and they say there are far more people breaking the red-light law.
BILLINGS, MT・5 DAYS AGO
Q2 News

Dolly Moore wrote on Twitter that she saw a jet go by and then heard what she described as an explosion in the sky.
BILLINGS, MT・2 DAYS AGO
Q2 News

While the wind has backed off near the mountains to the west, it will continue to gust for a few days. Eastern Montana gets cold Thursday.
BILLINGS, MT・4 DAYS AGO
Q2 News

The bakery served oven-fired pizza and was busy all night helping to make food deliveries to the nearby hotels and motor inns that were also busy accommodation travelers.
BILLINGS, MT・5 DAYS AGO
Q2 News

Details of the harrowing crime were released Thursday in court records charging a 32-year-old man with not only shooting two people but then attempting to rape one of the victims.
BILLINGS, MT・3 DAYS AGO
Q2 News

The Montana Women’s Run began in 1982 with 200 registrants and celebrated last year with over 4,600 women participating virtually around the world.
BILLINGS, MT・3 DAYS AGO
Q2 News

A milder than normal week will see some areas reach into the 50s at times. Strong crosswinds will impact the western foothills through Wednesday.
BILLINGS, MT・3 HOURS AGO
Q2 News

The Veazey family suffered the loss of their daughter on New Year's Day. The mother, Morgan Veazey, is now wanting to give back to the hospital that helped them through the difficult time.
BILLINGS, MT・5 DAYS AGO
Q2 News

Police tactics and use of force are under national scrutiny again, following the death of Tyre Nichols, 29, who was beaten by five police officers now charged with murder in Memphis, Tenn.
HARDIN, MT・5 DAYS AGO
Q2 News

A man accused of a Jan. 8 crime spree in Billings that left one man dead, another man seriously injured and numerous vehicles damaged or destroyed was arraigned Friday.
BILLINGS, MT・2 DAYS AGO
Q2 News

When you think of America's best BBQ, Roundup might not be the first town that comes to mind. But Roundup suddenly has a reputation for mouthwatering food.
ROUNDUP, MT・2 DAYS AGO
Q2 News

Travel near the mountains west of Billings is largely shut down until Wednesday afternoon. Northeast Montana has another round of cold. But the trend is warmer.
BILLINGS, MT・5 DAYS AGO