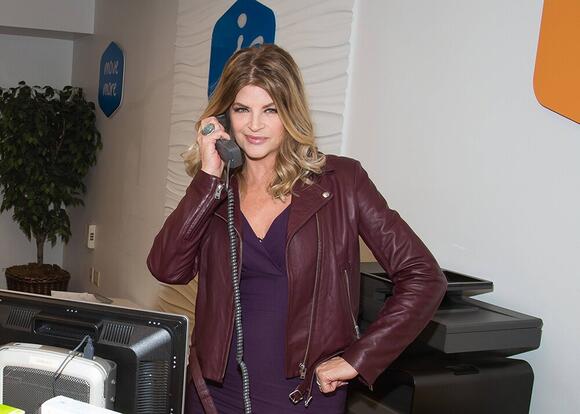 Cheers a nd Look Who's Talking star Kirstie Alley has died at the age of 71, her family confirmed on Monday.

Alley, one of the rare conservatives in Hollywood , died after a battle with cancer , which had been recently discovered. Her family hailed her as a "fierce and loving mother" and expressed gratitude for the medical professionals who tended to her.

KIRSTIE ALLEY OPENS UP ABOUT BACKLASH SHE RECEIVED FOR TRUMP SUPPORT: 'BLACKBALLING SITUATION'

"She was surrounded by her closest family and fought with great strength, leaving us with a certainty of her never-ending joy of living and whatever adventures lie ahead. As iconic as she was on screen, she was an even more amazing mother and grandmother," her family wrote in a statement posted to Alley's social media accounts. "Our mother's zest and passion for life, her children, grandchildren and her many animals, not to mention her eternal joy of creating, were unparalleled and leave us inspired to live life to the fullest just as she did. We thank you for your love and prayers and ask that you respect our privacy at this difficult time."

Alley will perhaps be best remembered for playing Rebecca Howe on the long-running NBC sitcom Cheers from 1987 until 1993. She won an Emmy Award and a Golden Globe for the role.

Often outspoken about her views in public, Alley had been a member of Scientology since 1978. The controversial religion has been criticized in recent years, but the actress has rejected claims that it is a cult and stood by it amid controversy that ensued after fellow actress Leah Remini left it and began criticizing it harshly.

"Kirstie was one of the most special relationships I’ve ever had. I love you Kirstie. I know we will see each other again," Travolta wrote in a Facebook tribute.

Alley also took part in two seasons of Dancing With The Stars with her partner, Maksim Chmerkovskiy.

In one of her final public appearances, Alley appeared on Fox's The Masked Singer earlier this year.

Alley received a star on the Hollywood Walk of Fame in 1995.

A woman in Texas was found dead nearly a week after she was reportedly planning to tell her boyfriend's wife about their relationship.
GRAND PRAIRIE, TX・8 DAYS AGO
WashingtonExaminer

As Sen. Kirsten Gillibrand (D-NY) prepares for her second reelection bid, the New York Democrat could face a number of primary challengers from other members of her party, according to reports.
WASHINGTON STATE・7 DAYS AGO
WashingtonExaminer

The Sundance Film Festival announced Thursday it has added a documentary about allegations made against Supreme Court Justice Brett Kavanaugh to its lineup.
UTAH STATE・8 DAYS AGO
OK! Magazine

Nearly two weeks after Lisa Marie Presley's sudden passing on January 12, ex-husband Michael Lockwood — the father of her 14-year-old twins, Finley and Harper — filed docs to try and find out how the singer's assets will be divvied up.According to Radar, Lockwood's attorney notified the court of the death and said, "We do not currently know the intended Executors and Trustees that the late Lisa Marie Presley had named.”Lockwood's confusion doesn't come as much of a surprise given he and the late star were in an ongoing divorce battle over monthly child support payments, though they eventually came...
2 DAYS AGO
WashingtonExaminer

The tragic story of Sam Ballard, the teen who ate a slug as a dare and then suffered for it

In 2010, Sam Ballard was a 19-year-old Australian teen who was sitting around and drinking with his "mates" when a slug crawled across the patio of his friend's home. The young men who were drinking immediately brought up the conversation about someone eating the slug.
1 DAY AGO
WashingtonExaminer

Colorado residents who filed their 2021 taxes will receive a tax rebate of up to $1,500 in 10 days.
COLORADO STATE・7 DAYS AGO
The US Sun

WEEKS before his tragic death, TikTok star Randy Gonzalez shared his last post with his son, Brice. The father-son duo with more than 15million followers on the platform shared a short five-second clip back in December. Brice could be seen comically yelling at Gonzalez, lip-synching along to a popular sound...
CALIFORNIA STATE・2 DAYS AGO
WashingtonExaminer

Social Security update: Third round of January's payments worth up to $4,194 to arrive in four days

The third and final round of Social Security retirement payments for January, worth up to $4,194, is scheduled to go out to recipients Wednesday.
7 DAYS AGO
WashingtonExaminer

New Jersey homeowners have 10 days to apply for a program that will give them up to $1,500 by May.
WASHINGTON STATE・7 DAYS AGO
NBC News

Rodney King's daughter on Tyre Nichols: 'People wonder where the anger comes from, this is where'

Rodney King's daughter weighed in on the fatal beating of Tyre Nichols earlier this month and the triggering parallels it draws to the brutality her father suffered at the hands of police officers more than 30 years ago. "People wonder where the anger comes from, this is where," Lora Dene...
MEMPHIS, TN・21 HOURS AGO
WashingtonExaminer

Rep. Nancy Pelosi (D-CA) refused to speculate whether former President Donald Trump could be charged with a crime given the mishandling of classified documents from President Joe Biden's vice presidency.
WASHINGTON STATE・8 DAYS AGO
WashingtonExaminer

Republican South Dakota Gov. Kristi Noem is calling on the federal government to investigate the leak of more than 2,000 Social Security numbers belonging to Trump officials and allies that were inadvertently included in documents released by the Jan. 6 committee earlier this month.
TEXAS STATE・8 DAYS AGO
WashingtonExaminer

Gov. Ron DeSantis's (R-FL) office pushed back on White House press secretary Karine Jean-Pierre for claiming the governor wanted to "block" the study of the history of black people in the United States after he rejected the College Board’s Advanced Placement course for African American studies.
FLORIDA STATE・6 DAYS AGO
Gillian Sisley

A horrified man has turned to Reddit after discovering his wife told his stepchildren that their sick father had died and was ‘never coming’ to see them ever again. He felt distraught after learning this, as the children were obviously devastated. He’s now unsure of how to proceed in his marriage after making a shocking decision behind his wife’s back.
21 HOURS AGO
WashingtonExaminer

Persecution facing Christians across the globe has never been worse.
CALIFORNIA STATE・7 DAYS AGO
WashingtonExaminer

There are 25 days left for South Carolina residents to file their 2021 taxes and receive a rebate of up to $800 in the first quarter of the year.
SOUTH CAROLINA STATE・7 DAYS AGO
WashingtonExaminer

Democrats have to take partial responsibility for the controversial election of Rep. George Santos (R-NY) as he played into their tradition of “identity politics,” according to political commentator Bill Maher.
WASHINGTON, DC・6 DAYS AGO