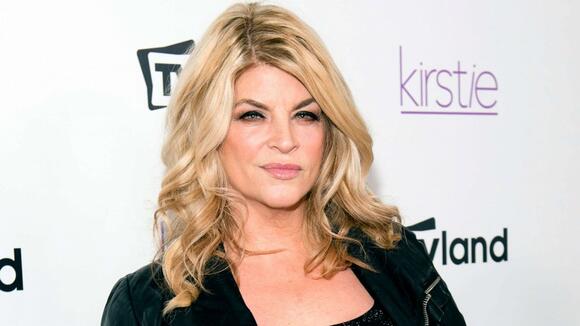 Actress Kirstie Alley has died after battling cancer, her family and her manager said Monday night. She was 71 years old.

Alley had been diagnosed with colon cancer, a rep for the actress confirmed to ABC News.

"We are sad to inform you that our incredible, fierce and loving mother has passed away after a battle with cancer, only recently discovered," Alley's children True and Lillie Parker wrote in a statement that was shared on Alley's Twitter. "She was surrounded by her closest family and fought with great strength, leaving us with a certainty of her never-ending joy of living and whatever adventures lie ahead. As iconic as she was on screen, she was an even more amazing mother and grandmother."

"Our mother's zest and passion for life, her children, grandchildren and her many animals, not to mention her eternal joy of creating, were unparalleled and leave us inspired to live life to the fullest just as she did," they added. "We thank you for your love and prayers and ask that you respect our privacy at this difficult time."

Alley, who was born in Wichita, Kansas, to Robert Deal Alley and Lillian Alley in 1951, first appeared in the 1982 film "Star Trek II: The Wrath of Khan," where she played the Vulcan Starfleet officer Lieutenant Saavik.

She starred in several smaller films following that role including "One More Chance," "Blind Date" and "Runaway."

Then, in 1987, she joined the cast of the sitcom "Cheers," where she replaced Shelley Long and remained with the show until its final season. Her performance earned her an Emmy Award in 1991 for outstanding lead actress in a comedy series. She later earned a second Emmy for her role in the 1994 television drama film "David's Mother." The following year, she was given a star on the Hollywood Walk of Fame.

In 1997, Alley starred in another sitcom, "Veronica's Closet," where she played Veronica "Ronnie" Chase, the owner of a lingerie company in New York City. The show ran for three seasons.

Later in her career, she had her own show titled "Kirstie," where she played the main character, Maddie Banks, a Tony Award-winning actress navigating life after a son she gave up at birth reappears and wants to reconnect with her. The show premiered in December 2013 and was later canceled in July 2014.

Alley appeared on "Dancing with the Stars" in 2011 and finished the competition in second place with dance pro Maksim Chmerkovskiy .

Her last TV appearance was earlier this year on "The Masked Singer" where she competed as "Baby Mammoth." During her reveal on the show, she said that she wanted to perform because of her grandchildren.

"They're gonna think this is good," she told the judges.

Upon the release of the news of Alley's death, some in Hollywood began paying tribute to the actress, including her former " Look Who's Talking " co-star, actor John Travolta , who shared a photo of him and Alley on Instagram .

"Kirstie was one of the most special relationships I've ever had," he wrote. "I love you Kirstie. I know we will see each other again."

So so so sorry Kristy is no longer here. God bless her soul. May your family be hugged by God during this very difficult time. She was so funny and a fantastic actor. May she now RIP

Love Kirstie Alley ♥️ She truly was a good humble woman and funny actress!!!! She died young 😢 Im glad she isn’t suffering anymore from cancer and is with the lord now!!!

Terrible thing,Cancer needs eradicated from this world. I feel sorry for her loved ones and wish them the best. I have lost many family members as well as friends to some sort of cancer, it's a sad,sad illness!

Paris Hilton and her husband, Carter Reum, have welcomed their first child together.
4 DAYS AGO
GMA

Dino Martin, the son of legendary crooner Dean Martin, was a multi-talented performer just like his father. But his life was cut much too short, long before his famous dad passed away.
2 DAYS AGO
INSIDE News

Jennifer Lopez and Marc Anthony have maintained a good friendship since they separated, and they do this for the well-being of the children they have in common. In addition, the ex-partner has always decided to support each other in any circumstance.
1 DAY AGO
Popculture

That '70s Show lives on with That '90s Show, which picks up almost 20 years after the original show ended. Unfortunately, in that time span, a beloved character died off-screen. As noted from a couple of lines of dialog from Kitty Forman (Debra Jo Rupp), her mom, Bea Sigurdson, died between the shows' two time periods. Bea was played by the late TV icon Betty White, who died on Dec. 31, 2021, in four memorable episodes of the original show.
1 DAY AGO
GMA

Actor Shemar Moore shared the first photo of his newborn daughter Frankie, saying she is "already the love of my life."
3 DAYS AGO
GMA

Madonna biopic not moving forward due to Celebration global tour

Madonna's biopic is not moving forward as the singer focuses on her Celebration global tour -- get the details!
5 DAYS AGO
GMA

Spelling shared details of why her 14-year-old daughter was hospitalized.
9 DAYS AGO
GMA

A California man is learning to read and documenting the process on TikTok, where he’s gained a following of over 125,000 fans.
COSTA MESA, CA・2 HOURS AGO
GMA

Blake Lively, Justin Baldoni to star in film adaptation of 'It Ends with Us'

Blake Lively and Justin Baldoni will star in the film adaptation of Colleen Hoover's bestselling novel, "It Ends with Us."
2 DAYS AGO
GMA

Willie Nelson turns 90 this year and he's celebrating the start of a new decade with a star-studded event.
LOS ANGELES, CA・5 DAYS AGO
GMA

"The Bachelor" star Zach Shallcross revealed to "GMA" what he's looking for in a partner ahead of his season's premiere.
CALIFORNIA STATE・7 DAYS AGO
GMA

Hailey Bieber has a brand new haircut, and her followers have thoughts.
6 DAYS AGO
GMA

Mattel has launched a brand new Barbie doll honoring the life and legacy of Bessie Coleman.
4 DAYS AGO
GMA

“Wait. Why is the new Purple Wiggle so fine?!” one TikTok user commented.
4 DAYS AGO
GMA