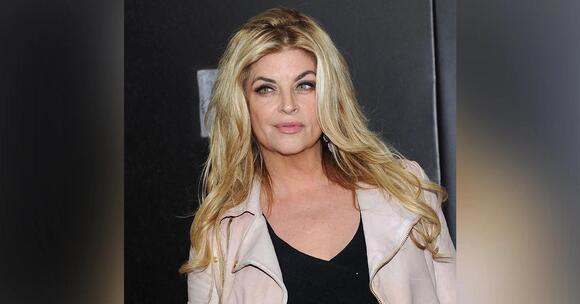 (NEXSTAR) – Actress Kirstie Alley has died at the age of 71, according to a statement from her family.

“We are sad to inform you that our incredible, fierce and loving mother has passed away after a battle with cancer, only recently discovered,” according to the statement published to her official social media channels Monday evening.

How bad is the flu this year? CDC map looks grim

Alley was undergoing treatment at the Moffitt Cancer Center, whose staff her children, True and Lillie Parker, thanked in the statement.

“She was surrounded by her closest family and fought with great strength, leaving us with a certainty of her never-ending joy of living and whatever adventures lie ahead,” the statement continued. “As iconic as she was on screen, she was an even more amazing mother and grandmother.”

Alley is perhaps best known for her role as Rebecca Howe in the hit sitcom “Cheers,” for which she won an Emmy Award and a Golden Globe in 1991. She also won an Emmy in 1994 for her performance in the telefilm “David’s Closet” and received another nomination for her role as Veronica Chase in her own show on NBC, “Veronica’s Closet.”

Alley also appeared in several movies, including “Star Trek II: The Wrath of Khan,” “Drop Dead Gorgeous,” and “Look Who’s Talking,” among others.

“Kirstie was one of the most special relationships I’ve ever had,” John Travolta, her co-star in “Look Who’s Talking” and “Look Who’s Talking Too,” posted on Instagram Monday night. “I love you Kirstie. I know we will see each other again.”

“Our mother’s zest and passion for life, her children, grandchildren and her many animals, not to mention her eternal joy of creating, were unparalleled and leave us inspired to live life to the fullest just as she did,” the statement read.

Alley’s children thanked her fans for their love and prayers and asked for privacy while they mourn.

One of the twin infants rescued during a statewide Amber Alert search in Ohio last month has died, police said.
COLUMBUS, OH・2 DAYS AGO
WFLA

he Tampa Police Department is investigating after a mother was found dead next to her sleeping child on Monday night.
TAMPA, FL・19 HOURS AGO
HollywoodLife

Cindy Williams was a successful actress known for her work on Laverne & Shirley. She was only married once, to Bill Hudson. Bill is notably also the ex-husband to actress Goldie Hawn. On Jan. 30, 2023, news broke that Cindy had died just five days prior at the age of...
1 DAY AGO
Distractify

“King of Pop” Michael Jackson’s family has been all over the news lately. The late pop star’s ex-wife Lisa Marie Presley passed away on Jan. 12. His daughter, Paris Jackson, attended the Los Angeles premiere of the documentary Pamela, a love story on Monday, Jan. 30. And that same day, Michael’s son Prince Jackson congratulated cousin Jaafar Jackson on his role as the “Thriller” singer in the upcoming biopic Michael. But what about Michael’s other son? Where is Blanket Jackson now?
LOS ANGELES, CA・13 HOURS AGO
Mashed

Celebrities often go into various endeavors besides acting. Their fame can be used as an excellent marketing tool and they usually have the finances to back up their enterprises. Celebrity doesn't always equate to success, however. Take for example Steven Speilberg's themed restaurant Dive!, which didn't survive; or Britney Spears' New York restaurant Nyla, which didn't last long either. Of course, there have been plenty of celebrity success stories as well, such as Hugh Jackman's The Laughing Man Coffee Shop or Ryan Reynold's Aviation Gin. What we don't see that often, though, is a celebrity trying the same style of business again once it has failed.
AUSTIN, TX・2 DAYS AGO
WFLA

An estimated 300,000 revelers lined the streets of downtown Tampa on Saturday for the 2023 Gasparilla Invasion and Parade of Pirates, the third-largest parade in the country.
TAMPA, FL・1 DAY AGO
WFLA

TAMPA, Fla. (WFLA) — It’s been over three years since Andrew Caballeiro was abducted when he was just seven days old, and there’s still been no sign of him. On Jan. 28, 2020, an AMBER Alert was issued for the infant after he was kidnapped by his father, 49-year-old Ernesto Caballeiro. Police said the man […]
MIAMI, FL・2 DAYS AGO
WFLA

These baby names are in danger of disappearing in 2023

Is your name on the list?
2 DAYS AGO
WFLA

‘I got a baby on the way’: Video shows police save alleged burglar who was shot by homeowner

Body camera video shows the heroic efforts of three police officers who saved the life of a suspected burglar after he was shot by a homeowner in Haines City.
HAINES CITY, FL・1 DAY AGO
WFLA

Hernando County sheriff's deputies shot and wounded two people after one of them opened fire on officers Sunday
BROOKSVILLE, FL・1 DAY AGO
WFLA

Actor Annie Wersching, best known for playing FBI agent Renee Walker in the series “24" and providing the voice for Tess in the video game “The Last of Us,” has died. She was 45.
LOS ANGELES, CA・2 DAYS AGO
WFLA

SARASOTA, Fla. (WFLA) — A Sarasota man was the latest winner of the Florida Lottery after claiming a $1 million prize Monday. The Florida Lottery said Michael Gasek, 55, won the prize from the 500X the Cash scratch-off game. Gasek bought the winning from the Texaco on 19 East Road in Sarasota. The 55-year-old took […]
SARASOTA, FL・1 DAY AGO
WFLA

Rob Gronkowski said partying made him a better football player, revealed he could return to NFL

A part of southbound I-275 was partially closed after a multi-vehicle crash in Tampa, according to police.
TAMPA, FL・1 DAY AGO
WFLA

"This is something that doesn't happen in Lakeland," Police Chief Sam Taylor said. "I have never worked an event where this many people have been shot at one time."
LAKELAND, FL・1 DAY AGO
WFLA

Manatee County deputies said they were looking for a man who was last seen Saturday evening.
MANATEE COUNTY, FL・1 DAY AGO