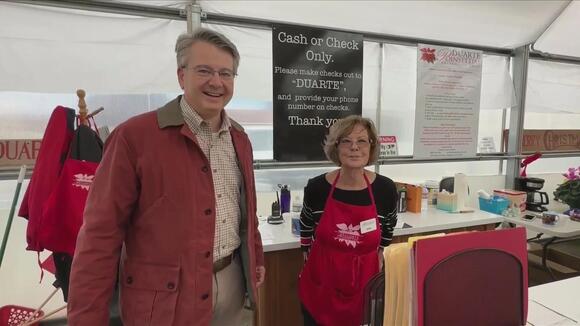 We talked with Duarte on Monday, and he told us he is very excited to get to work in Washington. He said he thanks the voters and reiterated his campaign promises to bring water to valley farms and to keep the region affordable. He said he is even willing to work across party lines to do so.

“We will reach across the aisle at any chance we get to work with work with whoever we can in Washington, D.C. Democrats, Republicans, we don’t mind,” said John Duarte, District 13 Congressman-Elect.

Duarte invited us to his family’s nursery, which is currently owned by him and his brother. It’s an operation he has helped build since 1989.

He said through his experience of being born and raised in the valley, especially as a farmer, has highlighted what he believes key needs are.

“I’m deeply ingrained in this community. My kids went to public schools here in Modesto. And my wife Alexandra, and I live on a farm just outside of Modesto here,” said Duarte as he showed us around the nursery.

He said step one, is to build the right team for the job, no matter their political affiliation.

“Water is not Democrat or Republican. Water is water. Jobs are jobs,” he said. “And so we’re gonna do everything we can to get ourselves tied into the valley… then go back to Washington DC and set up a really effective team back there.”

We asked Duarte about the 25-day wait for results, and his experience sharing a new member orientation with his opponent, Democrat Adam Gray, while they both waited. He said the wait didn’t bother him but added the situation was very unique. While in D.C., he and his team actually met with Gray.

“We agreed that whoever won, we would work together in terms of office space, or whatever arrangements, to make sure that when we got in there, whoever got in there, that we could do the best we could for constituent services and hit the ground running here in the district,” said Duarte.

Now, Duarte said if he needed something from Gray he wouldn’t hesitate to call and believes Gray would do the same for him. He said that’s just how stressful times are in the valley, and said he believes everyone has to work together to get results.

FRESNO, Calif. (KSEE/KGPE) – The heated back and forth between Fresno County District Attorney Lisa Smittcamp and Governor Gavin Newsom entered the next round of verbal jabs Thursday. Smittcamp responded to Newsom – after he inferred during a recent news conference that she has to bear part of the blame for the Selma shooting due […]
FRESNO COUNTY, CA・1 DAY AGO
YourCentralValley.com

FRESNO, Calif. (KSEE/KGPE) – Underreported business income by two former Clinica Sierra Vista executives, among others, has resulted in a nearly $26 million settlement against the medical provider, with ties to the Central Valley. Additionally, California Attorney General Rob Bonta and U.S. Attorney Phillip A. Talbert announced on Thursday that the healthcare provider, which serves […]
FRESNO, CA・1 DAY AGO
YourCentralValley.com

FRESNO, Calif. (KSEE/KGPE) – Fresno County District Attorney Lisa Smittcamp responds Wednesday evening to Governor Gavin Newsom’s remarks regarding her criticism of his early release policies, inviting him to discuss matters in person. [Governor Newsom’s] arrogant and defensive response is proof positive that he is attempting to deflect responsibility for his failed policies, but he […]
FRESNO COUNTY, CA・2 DAYS AGO
YourCentralValley.com

SACRAMENTO, Calif. (KSEE/KGPE) – Following the death of a police officer in Selma on Tuesday, both Governor Gavin Newsom and Attorney General Rob Bonta issued statements of condolence to those who knew him. “Jennifer and I join all the family, friends and colleagues mourning the tragic loss of Officer Carrasco, who devoted his life to […]
SELMA, CA・3 DAYS AGO
YourCentralValley.com

California woman is the oldest living person in the U.S.

SACRAMENTO, Calif. (KSEE/KGPE) – Californians are being urged by the State Controller to see if they are owed any lost or forgotten funds on this third annual National Unclaimed Property Day. According to the National Association of Unclaimed Property Administrators (NAUPA), nearly 33 million, or 1 in 7, people nationwide have properties waiting to be […]
CALIFORNIA STATE・2 DAYS AGO
YourCentralValley.com

FRESNO, Calif. (KGPE) – Katheryn Herr covers District Attorney Lisa A. Smittcamp’s statement regarding the Selma police officer who was shot and killed on Tuesday. Today, Governor Gavin Newsom, and every legislator in the state of California who supports this over-reaching phenomenon they try to disguise as legitimate criminal justice reform, has the blood of […]
SELMA, CA・3 DAYS AGO
YourCentralValley.com

DA ‘should blame herself’: Newsom on Selma police shooting

After enduring emotional and often scathing public comment, state regulators on Thursday ordered utilities to immediately distribute funds to lower natural gas bills that have become unaffordable for many Californians this winter. The Climate Credits, which are typically issued in April, will reduce home heating bills by $43 to $56 for most Californians based on […]
CALIFORNIA STATE・2 DAYS AGO
YourCentralValley.com

How much will you receive from California Climate Credits on your gas bill?

California’s Public Utilities Commission will meet next week to consider issuing Climate Credits earlier than usual to offset record high natural gas bills that have become unaffordable for many residents. These credits come from money generated by the auction of emissions permits to companies that produce carbon pollution, including power plants and natural gas distributors. […]
CALIFORNIA STATE・3 DAYS AGO
YourCentralValley.com

The College Board on Wednesday announced major changes to its Advanced Placement (AP)) African American studies course after objections from the administration of Florida Gov. Ron DeSantis (R), drawing sharp criticism from advocates and civil rights groups who said the alterations removed key material. The College Board has said the changes were already in progress, […]
FLORIDA STATE・3 DAYS AGO
YourCentralValley.com

Certain details conflict with what the coroner in the case, and police, initially said.
IDAHO STATE・1 DAY AGO
YourCentralValley.com

8th largest Powerball jackpot is up for grabs Wednesday night

The upcoming Powerball drawing is poised to be the eighth largest in the game’s history, California Lottery officials announced Wednesday. The grand prize has grown to an estimated $653 million, and if someone hits all six numbers during tonight’s drawing, they could take home $350 million if they chose the lump sum payout option. One […]
CALIFORNIA STATE・3 DAYS AGO
YourCentralValley.com

Buying a pre-owned electric car? You could get a $4K rebate

FRESNO, Calif. (KSEE/KGPE) – If you’re buying or leasing a pre-owned electric vehicle and are a PG&E Electric customer you may qualify for up to $4,000 in rebates. Pacific Gas and Electric Company (PG&E), announced its new Pre-Owned Electric Vehicle (EV) Rebate Program. It provides qualified residential customers up to $4,000 when purchasing or leasing […]
CALIFORNIA STATE・2 DAYS AGO