Obese people will lose more weight if you pay them: study 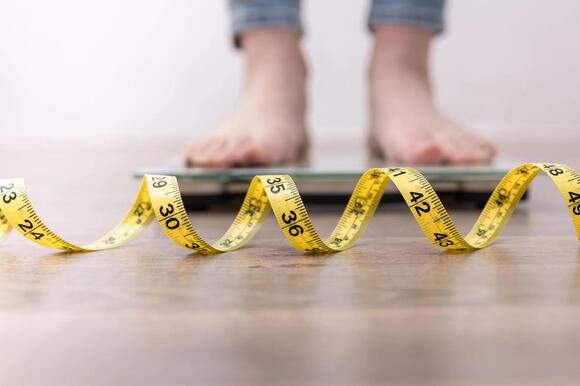 Giving people a monetary incentive to achieve weight loss goals doubles the pounds they lose, according to a new study.

Researchers tracked the weight loss of 668 morbidly obese adults in New York City and Los Angeles over a six-month period. The goal was for participants to lose 10 pounds.

The study, published in JAMA Internal Medicine , found that two thirds of participants achieved the goal when they were offered money as a reward, but those who weren’t lost half the amount of weight.

The average weight of participants before the study was 218 pounds with a BMI, or body mass index, of 38, putting them in the morbidly obese range. People in the study were between the ages of 18 to 70 and came from low-income households that had an average income of less than $40,000 a year. The majority — 80% — were women. The study was conducted from Nov. 2017 to May 2021.

Researchers split the participants into three groups, tasked them with losing 5% of their body weight, and assigned incentives randomly. These included: goal-directed incentives, outcome-based incentives, and a resources-only group. All participants were enrolled in a program to help them lose weight.

Each group were given different tools and rewards to help them drop the pounds but only two of the three groups were offered monetary incentives.

The resources-only group participants only used the weight-loss program. The other two groups were given varying financial incentives. The outcome-based incentives group was given self-monitoring tools — a digital scale, food journal and a physical activity monitor — health education, and monthly check ins. The goal-directed group was given weight-loss tools. Both could earn up to $750 by achieving mini-goals.

Participants received up to $30 per month for using their food journal at least five days a week and recording their body weight at least three days per week in the first six months.

They also wore fitness trackers, receiving up to $20 per month if they achieved 75 minutes of physical activity per week, which increased to 150 minutes from month four to month six.

The average amount earned in the goal-directed group was $440.44 with a median weight loss of 9.8 pounds. In the outcome-based group, they earned an average of $303.56 and lost an average of 10.6 pounds.

Those in the group with no financial incentives lost 4.9 pounds during the study period.

Around 61 participants dropped out of the study within the first six months for the goal-based group, with 51 dropping out in the incentive group and 54 in the no cash incentives group.

“Our study provides firm evidence that offering incentives, especially cash rewards, even if only for six months, helps people of limited means struggling with obesity to lose weight,” Jay said in a press release. “However, any kind of incentive to lose weight can work, even if it is just offering the tools to help do so.”

WALMART is allegedly under investigation due to recent questions about their dietary supplements. These inquiries specifically have to do with magnesium products. Attorneys for Top Class Actions believe that Walmart may be mislabeling the magnesium supplements that are under the retail chain's Equate brand, according to Best Life. Magnesium is...
2 DAYS AGO
Zoe Dixon

The hidden dangers of processed foods have been uncovered quite some time ago, due to the fact that they contain various agents that lead to decaying health. One of the main culprits that they commonly contain is palm oil - an ingredient linked to increased risks of cancer and heart disease. While consuming whole food is the safest way around this issue, many modern diets rely heavily on highly-processed options leaving their consumers unknowingly vulnerable.
4 DAYS AGO
New York Post

The days of pulling all-nighters might be over. Teens who don’t sleep enough could be at risk for a life-threatening illness, a new study suggests. Researchers from Stockholm University in Sweden discovered that teenagers who get less than seven hours of zzz’s every night are 40% to 50% more likely to later develop multiple sclerosis (MS), compared to those who get a sufficient amount of sleep. MS is a neurodegenerative disorder that affects over 2.3 million people globally, according to the National MS Society. The chronic illness is marked by a breakdown in the body’s protective nerve coating, called the myelin sheath, resulting...
13 HOURS AGO
New York Post

DEAR ABBY: I have a moral and ethical dilemma. I nominated a co-worker for a benefit through our company. The person was awarded what I consider to be a good sum ($5,000) for replacement hearing aids. Seven months have gone by and this person “still has the check” and hasn’t used the money for its intended purpose. They bought two “beater” cars and took a trip to New York City. I feel like I was duped. Should I call the hotline and let the foundation know my suspicions, or let it go? I feel that this person got away with what...
2 DAYS AGO