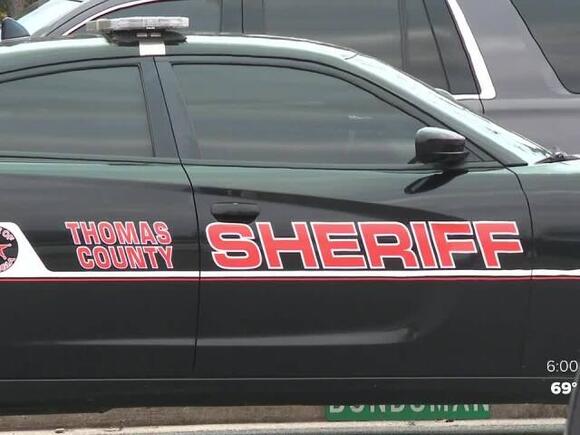 A Thomas County Sheriff's deputy is in stable condition recovering from surgery on Monday morning at a Thomasville hospital after being shot 3 times while off-duty during a family gathering over the weekend.

Thomas County Sheriff's Captain Steven Jones said the off-duty deputy was shot twice in the head and once in the back while trying to help a family friend named Terry Sloan get home safely from a family party on Midway Road on Friday night.

"Half an inch or one inch either way and he wouldn't be with us, it's a true miracle he's alive," said Jones.

Captain Jones said the whole community is rallying behind the Deputy and it's truly a miracle that he's alive.

This is the 3rd shooting in 2022 that involved a deputy in Thomas County, according to Jones, which he says is a sign of what's happening across the country.

The deputy is doing well after surgery Monday morning at the hospital in Thomasville and the captain says he'll likely return to the force after he recovers.

They plan to release the deputy's name once they speak with his family and they give the ok.

The Georgia Bureau of Investigation has identified 24-year-old Raymond Brown as the wanted suspect that fled from officers during a traffic stop in Cairo on Saturday, Jan. 28.
CAIRO, GA・4 HOURS AGO
WTXL ABC 27 News

The Cairo Police Department and Georgia Bureau of Investigations (GBI) are investigating after a Cairo officer died Saturday afternoon while on duty.
CAIRO, GA・1 DAY AGO
WTXL ABC 27 News

Victim in recent carjacking speaking out

A woman was trying to give four teenagers a ride home last Thursday morning. Once she got to an apartment complex, they beat her and stole her car.
TALLAHASSEE, FL・3 HOURS AGO
WTXL ABC 27 News

The community honoring Cairo Police Officer Clarence "CJ" Williams who died while on duty Saturday. His family and friends say he died doing what he loved.
CAIRO, GA・4 HOURS AGO
WTXL ABC 27 News

A 16-year-old male was detained by law enforcement officials after the Taylor County Sheriff's Office said the male made a threat of violence to occur Friday at Taylor County High School.
TAYLOR COUNTY, FL・3 DAYS AGO
WTXL ABC 27 News

Two Tallahassee Police Department officers were were involved in a shooting that injured a man on West Pensacola Street in October 2022, were cleared by a grand jury in Leon County.
TALLAHASSEE, FL・4 DAYS AGO
WTXL ABC 27 News

Sheriff's Office to use additional funding towards fight against drugs

The Georgia Bureau of Investigation announced Friday that two arrests were made in connection with a homicide.
GRADY COUNTY, GA・10 DAYS AGO
WTXL ABC 27 News

Rally for victims of police brutality

Local organizations are urging people to come together to demand justice for all victims of police crimes, including Tyre Nichols.
TALLAHASSEE, FL・3 HOURS AGO
WTXL ABC 27 News

Stassi is a passive alerting Labrador Retriever, meaning she'll lay down if she detects a firearm or bullets.
LEON COUNTY, FL・6 DAYS AGO
WTXL ABC 27 News

If you're looking to say "I do" on Valentine's Day, the Leon County Clerk is offering an option to get married for free that day, but you'd be getting married along with other couples.
LEON COUNTY, FL・9 HOURS AGO
WTXL ABC 27 News

Kent Dr. in Adel, Ga saw some of the worst damage from Sunday's EF-2 tornado that tore through over 5 miles of Cook County
COOK COUNTY, GA・7 DAYS AGO
WTXL ABC 27 News

Judge Tiffany Baker-Carper to speak on juvenile justice during discussion

ABC 27 spoke with Leon County Judge Tiffany Baker Carper about what to expect from that conversation, what's changed in the legal process recently, and what she wants our youth to remember most.
TALLAHASSEE, FL・5 DAYS AGO
WTXL ABC 27 News

Gadsden County High School has a new head football coach, and they didn't have to look very far to find him.
GADSDEN COUNTY, FL・3 HOURS AGO