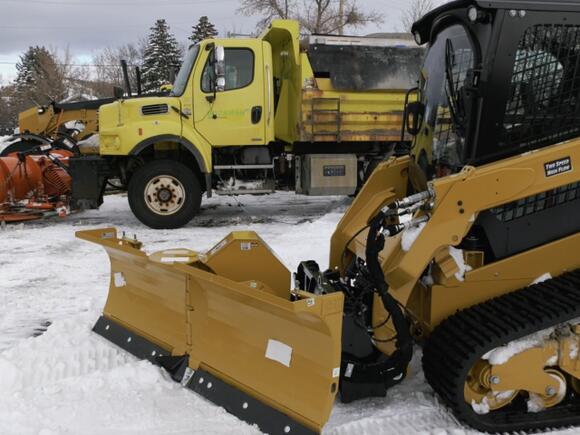 BOZEMAN — As snow is expected to continue to fall this winter in Bozeman and surrounding areas, snow plow drivers are working hard to clear off busier roads.

Bozeman resident, Jaycey Ells, shares how the roads this year seem to be worse than in the past.

“This year alone I've gotten stuck in my driveway. I got stuck three blocks from my driveway just this morning,” says Ells.

“At three in the morning, we have a full crew come out doing all the snow rolls," says VanDelinder, "And we try to get all the roads ready. So if you get on one of the major roads and call them arterials and collectors, you're able to get to work, school, and hospital."

VanDelinder says although their staffing is in pretty good shape, they could always use a couple more employees and it isn't required to have a commercial driver's license to apply. Ells believes roads leading to Big Sky need to be focused on more due to the influx of employees commuting through the canyon.

“I've never seen Huffine in worse condition even like during blizzards where you're cutting trail," says Ells, “There’s so many workers going up to Big Sky that those need to be focused on for now.”

VanDelinder assures residents the snow plow drivers are out working hard to keep the roads safe.

“We're out there. You may not see us, but if you get up at three in the morning you certainly will see us. We're the big yellow trucks out there. But take your time. We live in Bozeman. Try to get to a major street because those are the ones that are cleared first. Try not to cut through your residential streets because they have not been plowed yet,” says VanDelinder.

Dozens of crashes were reported before the shutdown, including an overturned tanker carrying asphalt oil.
LIVINGSTON, MT・3 DAYS AGO
KBZK News

I-90 reopens between Logan and Manhattan after cattle trailer crash

The Montana Department of Transportation reports that traffic is being diverted off I-90 in both directions between Logan and Manhattan due to a commercial vehicle crash in the median.
MANHATTAN, MT・1 DAY AGO
KBZK News

The bakery served oven-fired pizza and was busy all night helping to make food deliveries to the nearby hotels and motor inns that were also busy accommodation travelers.
BIG TIMBER, MT・3 DAYS AGO
KBZK News

I-90 still closed from Livingston to Big Timber

Although these trails will be taken over by the event, some local nordic skiers think the fun outweighs the sacrifice.
BIG SKY, MT・1 DAY AGO
KBZK News

In Billings, police issued 268 red light citations in 2022 and 169 warnings, and they say there are far more people breaking the red-light law.
BILLINGS, MT・3 DAYS AGO
KBZK News

A multi-phase project in north Bozeman is expected to bring plenty of commercial and residential properties to the area.
BOZEMAN, MT・2 DAYS AGO
KBZK News

A domesticated duck was found with multiple blowdarts in its body Sunday evening, January 29. This prompted a rescue between volunteers and Bozeman Animal Control.
BOZEMAN, MT・5 DAYS AGO
KBZK News

The City of Bozeman and The Trust for Public Land are moving forward on a fun new activity for kids at Story Mill Park—a splash pad.
BOZEMAN, MT・4 DAYS AGO
KBZK News

The Logan Landfill has turned into a great spot to do a little bird watching. Employees say they see about 50-60 eagles a day out there scavenging for food.
THREE FORKS, MT・6 DAYS AGO
KBZK News

There is a new option for groceries in Bozeman as of Wednesday, Feb. 1. The new 30,000-square-foot Whole Foods store opened its doors to customers for the first time.
BOZEMAN, MT・3 DAYS AGO
KBZK News

No. 1 West girls remain atop Eastern AA with dominant win over No. 2 Gallatin

Billings West girls basketball added their tenth win of the season on Friday night with a dominant win at Gallatin 68-45.
BILLINGS, MT・13 HOURS AGO
KBZK News

January was National Stalking Awareness Month, and Haven wanted to spread awareness about the act of stalking, as well as how methods of stalking have changed.
BOZEMAN, MT・3 DAYS AGO
KBZK News

A 4.1 magnitude earthquake struck near Livingston on Monday, Jan. 30, 2023 according to the U.S. Geological Survey.
LIVINGSTON, MT・5 DAYS AGO
KBZK News

Students at Gallatin High School felt like one thing was missing when the high school first opened, a student newspaper.
BOZEMAN, MT・5 DAYS AGO
KBZK News

Patrick Hemingway sat down with MTN's Donna Kelley for a "Kelley conversation" about his relationship with his famous father, author Ernest Hemingway.
BOZEMAN, MT・1 DAY AGO
KBZK News