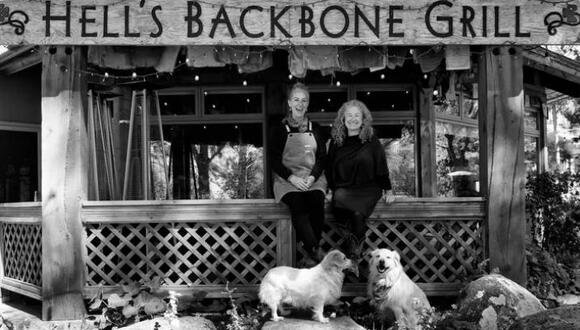 SALT LAKE CITY ( ABC4 ) – On Nov. 29, Hell’s Backbone Grill and Farm asked for help to save their restaurant from closing its doors permanently.

Co-owners Blake Spalding and Jen Castle initially asked for $324,000 to keep the doors open, and in less than a week, they’ve surpassed that goal, and the donations are still coming in. This has left Spalding speechless.

“The outpouring of love has been astonishing for us. We were going to close because our bills were insurmountable,” Spalding said.

Like many restaurants during the COVID-19 pandemic, they didn’t have enough money to continue without help. They took the U.S. Small Business government-funded PPP money , then took out loans because they, like many other businesses, expected the pandemic to end quickly. When it didn’t, they were shocked to watch their funding dry up.

“It’s just been really surprising because we have always been pretty resilient. It’s not like some great money-making formula, but we make enough to pay our employees and have our lives here and be able to reopen every year, and this year we kind of just got crushed,” Spalding said.

Spalding and Castle decided they would warn their community over a newsletter that the business was not looking good and they were “exploring their options.” What neither Spalding nor Castle expected was the letters, the phone calls, and the visits from past and loyal customers reaching out all with the same message: “Please don’t make this decision without us. Give us a chance to help.”

“[That] really affected me,” Spalding said. “I was 36, and Jen was 28 when we started the restaurant, and I will turn 59 in February, and I’m just like, wow, those years really go by, and we’ve been in deep service to our project, and it’s deeply meaningful that we’ve impacted people in a way that they’re so invested in this as well.”

Established in 2000 in the heart of the Grand Staircase-Escalante National Monument, Hell’s Backbone Grill and Farm is a seasonal restaurant that opened from mid-March to Thanksgiving, but when the pandemic first hit, they weren’t able to reopen until early July that year.

“We had a very truncated season. It was about four months, and then we were doing outdoors only. Because at that time, there were no vaccines, and it was very scary,” Spalding said.

Hell’s Backbone Grill and Farm is in the most remote town in the lower 48 states, and for that reason, they chose to be careful.

“A lot of it has been working with what our staff wants. Our staff was excited this year about moving back into the dining room. We were too, and then we tried twice, but then we had a whole segment of our staff go down hard with COVID during that time,” Spalding said.

They were finally able to open the dining room again in early October, but it’s August when the restaurant is at its most beautiful because of their farm, Spalding said.

“We have a six-and-a-half acre farm that we started in 2005. Technically, we were the first true farm to table in the rocky mountain southwest. At least in terms of having actual production under the umbrella of our organization,” Spalding said.

Woman airlifted to hospital after falling on Ivins hike

Spalding hopes that during their next season in mid-March, more Utahns will visit.

“I’m definitely an optimist. I love the sort of redemption stories as a narrative. One of my customs with my sister is that we always watch It’s a Wonderful Life every Christmas. I’m having that feeling like I’m in that movie right now, and people are showing up, and I don’t know what else to say except thank you, and I feel very, very, very deeply moved and sort of overwhelmed with the gratitude.”

In the future, Spalding and Castle would like to buy their building, and it will take a lot more money than what they’ve raised, but it’s a process they can now consider since they’ve received so many donations.

“I’ll say I didn’t get much sleep this year. I was so stressed I got gut problems. It was hard on my team because no one wants to work with a stressed-out owner, but what I want to say it’s just that it’s the same sort of truism–love really solves a lot. Money will really help, but it’s the feeling of being appreciated and our worth and what we mean to people,” Spalding said.

While Spalding is grateful for the support, she worries about other businesses that haven’t been so lucky.

“A lot of restaurants are not doing well right now because they’ve made that first payment for those loans, and I’m worried that we’re going to see a lot more restaurants making the decision that they can’t keep going,” Spalding said.

Spalding’s final words? Show love and support to your favorite places because you don’t know who’s hurting, and they could probably use your help.

Fall Out Boy is set to bring their 2023 headline tour, So Much For (Tour) Dust, to West Valley City this summer with Bring Me The Horizon as one of the supporting acts.
WEST VALLEY CITY, UT・18 HOURS AGO
ABC4

As Utah's U.V. index rises, you may need to start applying sunscreen: but don't apply this recalled sunscreen by Banana Boat.
UTAH STATE・1 DAY AGO
ABC4

The United States District Court in Utah has ordered $10.55 million in damages to be awarded to the family of a Ugandan human rights activist killed in Arches National Park in 2020.
UTAH STATE・1 DAY AGO
ABC4

A Utah couple known for uncovering a new dinosaur species and the best-preserved tyrannosaurus skull in the area displayed the fossils during this year's DinoFest.
UTAH STATE・21 HOURS AGO
ABC4

This Utah sinkhole hits coldest temp in the US

As weather in Utah continues to reach low temps, the coldest location was Peter Sinks. This sinkhole was the coldest place in the country Jan. 30, 2023.
UTAH STATE・1 DAY AGO
ABC4

SALT LAKE CITY (ABC4) – It’s a bone-chilling start to the work week with the coldest temperatures of the season felt early this morning.  Overnight lows were down to -30 in Logan this morning, with a wind chill of -47 degrees at 7:05 a.m. Temperatures along the Wasatch Front dropped into the single digits with wind […]
UTAH STATE・1 DAY AGO
ABC4

School districts north of Utah have announced a two-hour delay to their schedules for Tuesday, Jan. 31, due to extreme cold.
LOGAN, UT・1 DAY AGO
ABC4

The National Weather Service has issued several Wind Chill Warnings for Utah due to the arrival of arctic air blowing through the state. Temperatures will already be cold, but with the wind, things could get very unsafe if you're not careful.
UTAH STATE・1 DAY AGO
ABC4

With the near-constant stream of snowstorms coming through our mountains, the numbers keep going up and up.
UTAH STATE・6 DAYS AGO
ABC4

After overnight snow showers, we see showery activity dwindle through Saturday, with another storm system targeting the state on Sunday.
UTAH STATE・4 DAYS AGO
ABC4

Bone-chilling temperatures hanging on into Wednesday

Utah's abortion law is not enough, according to Rep. Kera Birkeland (R-Morgan). She introduced a bill last week that would increase restrictions; and her sister, a sexual assault survivor, is opposing her.
UTAH STATE・1 DAY AGO
ABC4

A herd of elk caused a little bit of traffic trouble Thursday afternoon when they congregated right next to Interstate 80 and later ran across Foothill Drive.
UTAH STATE・5 DAYS AGO
ABC4

An Arizona man who was federally charged with kidnapping last week is now facing additional charges in Davis County for the same crime.
DAVIS COUNTY, UT・16 HOURS AGO
ABC4

Utah State Rep. Ken Ivory, District 39, has filed a resolution for Utah to join the states calling for term limits on members of Congress.
UTAH STATE・23 HOURS AGO
ABC4

Advocates are coming together to call on state leaders to invest in programs instead of tax cuts.
UTAH STATE・3 DAYS AGO
ABC4

The American Civil Liberties Union of Utah is considering suing the State of Utah over a new law that prevents people under the age of 18 from receiving gender-affirming care such as puberty blockers and transgender surgeries.
UTAH STATE・1 DAY AGO
ABC4

SALT LAKE CITY (ABC4) – Gov. Spencer Cox recently gave his State of the State address, but it’s obvious he didn’t know that Utah would find itself in such an icy grip after his talk. Since the 19th of January, few locations in the state have made it to normal average temperatures, and it looks like […]
UTAH STATE・7 DAYS AGO
ABC4

We kick off another stretch of active skies in Northern Utah thanks to a series of weather systems moving through our region.
UTAH STATE・5 DAYS AGO