Bucs Actives/Inactives: One of Brady’s favorite targets not playing against Saints 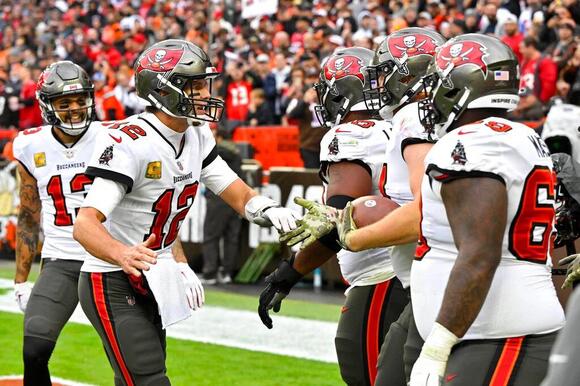 TAMPA, Fla. (WFLA) – Ahead of Monday night’s primetime game against the New Orleans Saints, one of quarterback Tom Brady’s favorite targets will be inactive against the rivals.

After being listed as questionable earlier in the day, the team announced that Brate, among six other players have been ruled out.

Wirfs being ruled out comes as no surprise after he was carted off the field following a “gruesome” injury against the Cleveland Browns last Sunday.

Something to note is that running back Leonard Fournette meaning we could potentially see his return after being out since the Bucs vs. Seahawks game in Germany.

Kick off for MNF game is set for 8:15 p.m. at Raymond James Stadium. Fans not headed to the game can stay tuned by following along for all live updates here.

For the New Orleans Saints, they have ruled out cornerback Marshon Lattimore who got into a brawl with Bucs’ Mike Evans last matchup. With his absence, this leaves the door wide open for the Buccaneers’ offense.

Tom Brady will not go immediately from the playing field to the broadcast booth.
2 DAYS AGO
WFLA

Who are the Florida natives and college standouts playing in this year’s Super Bowl?

Get your game day snacks and jerseys ready because the 2023 Super Bowl is less than a week away!
TAMPA, FL・10 HOURS AGO
WFLA

Damar Hamlin made a brief appearance in Phoenix during Super Bowl week to receive the NFLPA's Alan Page Community Award.
PHOENIX, AZ・11 HOURS AGO
All Seahawks

The Hernando County Sheriff's Office is searching for the person who shot two people in Brooksville on Tuesday night.
BROOKSVILLE, FL・23 HOURS AGO
WFLA

A Hillsborough County Sheriff's Office cadet was arrested on Tuesday after he was accused of stealing from his former employer.
HILLSBOROUGH COUNTY, FL・21 HOURS AGO
WFLA

A cat surrendered to a Florida animal shelter for being “too affectionate” has found his forever home thanks in part to a TikTok video shared by the Humane Society of Broward County.
BROWARD COUNTY, FL・2 DAYS AGO
WFLA

Suspect in deadly carjacking identified, believed to be at-large in Tampa

Hillsborough County deputies said they are investigating after two people died in an apparent murder-suicide at an apartment complex.
HILLSBOROUGH COUNTY, FL・1 DAY AGO
WFLA

Winner! A lucky player in Washington state overcame steep odds and matched all the numbers in Monday night's drawing to win a jackpot worth $754.6 million, according to lottery officials.
WASHINGTON STATE・1 DAY AGO
WFLA

On what many families expected to be a night of fun at the fair, things turned to chaos after shots rang out at the fairgrounds in Arcadia Saturday.
ARCADIA, FL・2 DAYS AGO
WFLA

The family of a Florida Lyft driver who went missing last week said they are now mourning his loss after receiving "unfortunate information."
DELRAY BEACH, FL・1 DAY AGO
WFLA

Hernando County deputies are searching for a missing teenager who disappeared last week while on the way to his school bus.
BROOKSVILLE, FL・2 DAYS AGO
WFLA

The Hernando County Sheriff's Office is searching for the person who shot two people in Brooksville on Tuesday night.
BROOKSVILLE, FL・23 HOURS AGO
WFLA

A Pasco County woman became a multi-millionaire after claiming a $2 million prize from a Powerball drawing.
PASCO COUNTY, FL・1 DAY AGO
WFLA

A Tampa woman died early Tuesday morning after getting into a crash with a tractor-trailer, according to the Florida Highway Patrol.
TAMPA, FL・1 DAY AGO