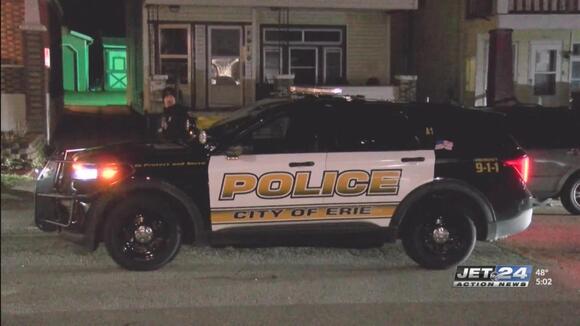 One person is seriously injured following an overnight shooting in Erie.

Police responded to a call just after 1:30 a.m. Monday in the 2900 block of German Street. According to Erie Police, when they arrived on the scene, they found a man suffering from two gunshot wounds to the pelvis.

The victim was taken to UPMC Hamot for treatment. Two people were arrested but police said those involved knew each other. No charges have been filed.

“We did recover multiple firearms at that scene. A residence in the 2900 block of German Street was held as a crime scene. We may currently be serving a search warrant on that scene,” said Deputy Chief Rick Lorah, Erie Bureau of Police.

Investigators said they would consult the district attorney’s office before filing charges.

(WJET/WFXP/YourErie.com) — Erie Police have arrested a suspect in connection with a recent murder at an Erie nightclub. Police announced the arrest of Shannon Goodwin, 22, on Jan. 30. He is facing criminal homicide charges, along with other charges including aggravated assault. Photo courtesy Erie Police: Shannon Goodwin mugshot The murder happened during a shooting […]
ERIE, PA・1 DAY AGO
YourErie

An Erie teen will be spending several years behind bars after a local church was shot up. Deangelo Troop Jr., 17, was sentenced to three and a half to seven years in state prison by Erie County Judge John Mead. Last February, several shots were fired into Holy Trinity Catholic Church during a neighborhood shooting […]
ERIE, PA・17 HOURS AGO
YourErie

As the call for police reform continues across the country, peaceful protests are taking place in the commonwealth — including right here in the City of Erie. A rally for justice for Tyre Nichols was held outside of City Hall on Sunday, Jan. 29. Participants said they are asking for reforms to policing and looking […]
ERIE, PA・17 HOURS AGO
YourErie

The City of Erie is receiving $200,000 to help make city streets safer.  Monday, U.S. Senator Bob Casey announced the funding from the U.S. Department of Transportation. A spokesperson for Sen. Casey said the funding will allow for the city to develop a safety action plan — which will help to address the concerns of […]
ERIE, PA・17 HOURS AGO
YourErie

(WJET/WFXP/YourErie.com) — Gas prices are continuing to inch up again in Western Pennsylvania. The average throughout Western Pennsylvania, according to AAA, is $3.865 per gallon. That’s a slight increase from a week ago (Jan. 23) when gas averaged $3.779. It’s a steeper incline from prices just a year ago (Jan. 31, 2022) when gas averaged […]
ERIE, PA・18 HOURS AGO
YourErie

The Erie community has continued to stand up and support Ukraine in some extremely trying times, so Ukrainians wanted to show their appreciation by hosting a Dinner for Ukraine. Dinner was set at The First Ukrainian Pentecostal church on Pine Avenue. On the menu were authentic and home cooked Ukrainian dishes, which was blessed before […]
ERIE, PA・1 DAY AGO
YourErie

(WJET/WFXP/YourErie.com) — A bumpy ride is a bummer. Not only is it a bummer, it could damage a vehicle. The culprit, often, is potholes — those pockets of bad luck where the pavement has worn away. And varying temperatures compound the issue. Here’s how it happens: Roadways are littered with cracks. When it rains or […]
PENNSYLVANIA STATE・20 HOURS AGO
YourErie

(WJET/WFXP/YourErie.com) — A blood bank is getting community love and recognition from a culinary hotspot in downtown Erie. For the month of February, Flagship City Food Hall and Perry’s Pizza & Tavern are featuring Community Blood Bank as their “Charity of the Month.” “Flagship City Food Hall is thrilled to partner with the Community Blood […]
ERIE, PA・13 HOURS AGO
YourErie

Erie City Council is reviewing 20 applicants, hoping to fill a vacant seat. Each of the six members of the City Council will select five applicants to interview on Thursday, Feb. 9. One of the applicants is former councilwoman Kathy Schaaf, who did not run for a second term in 2021. Schaaf was elected to […]
ERIE, PA・17 HOURS AGO
YourErie

Know an outstanding Erie citizen? Nominate them for a ‘Distinguished Service Award’

Most first responders truly go above and beyond in the line of duty to keep the community safe and sometimes even any civilian can make a difference. Erie County Executive Brenton Davis said he hopes to begin honoring local first and second responders with an annual distinguished service awards program. An annual county-wide recognition program […]
ERIE COUNTY, PA・13 HOURS AGO
YourErie

Later this week, members of Erie City Council will be voting on a pay raise for themselves. Last year, city council voted down a proposed pay hike. On Wednesday, Feb. 1, Erie City Council will vote on an ordinance that would increase council members’ pay based on experience. Council members who have served more than […]
ERIE, PA・18 HOURS AGO
YourErie

NWPA Pride Alliance gives back to community with donation drive

The NWPA Pride Alliance hosted its first donation drive for the year. A few times every year, the Pride Alliance comes together and holds a drive to give back to their community. Initially, the group started this event in 2020, during the pandemic, asking for boots and coats but are now looking for any warm […]
ERIE, PA・2 DAYS AGO
YourErie

The 2023 All-Breed Dog Show, Obedience and Rally Trails got underway on Saturday at the Bayfront Convention Center. “We have nearly 1,200 entrees in this dog show. It’s an impressive number and that number represents 135 different breeds. They come from 28 states plus Canada,” said Jeanne Stiner, Show Chair. The Bayfront Convention Center is […]
ERIE, PA・2 DAYS AGO
YourErie

(WJET/WFXP/YourErie.com) — UPMC is holding an employment fair on Tuesday, Jan. 31. The fair is an opportunity to learn about positions at UPMC Hamot. More than 200 people already have registered for the event that will be held from 10 a.m. to 6 p.m. at UPMC Health Plan, 380 E. Bayfront Pkwy in Erie. During […]
ERIE, PA・19 HOURS AGO
YourErie

(WJET/WFXP/YourErie.com) — The Erie Catholic School System has launched their system-wide annual fund giving campaign in conjunction with Catholic Schools Week. The campaign begins Sunday, Jan. 29, and will run until Feb. 28 with the funds raised going to support strategic goals across all six of their campuses that align with their mission and vision, […]
ERIE, PA・2 DAYS AGO
YourErie

Kids and adults of all ages brought out their snow engineering skills in Waterford Saturday. It was the Third Annual Snowman Building Contest hosted by the Kiwanis Club of Fort LeBoeuf for students in their school district. The recent snowfall provided just what kids and their families needed to get started on the competition. A […]
WATERFORD, PA・2 DAYS AGO
YourErie

(WJET/WFXP/YourErie.com) — For the 20th year, the Erie County Historical Society-Hagen History Center and Penn State Behrend have teamed up to hold “Dinner Under the Stars.” This Valentine’s Day, you and your significant other can enjoy a four-course dinner under the night sky at the Yahn Planetarium at Penn State Behrend in Erie — 4205 […]
ERIE, PA・20 HOURS AGO
YourErie

Nominations to be accepted for distinguished service awards

(WJET/WFXP/YourErie.com) — Erie County citizens and first and second responders will have a shot at the spotlight as Erie County launches the Erie County Distinguished Service Awards nomination period next month. The awards ask community members to nominate a first or second responder and private citizens who have performed a significant act of public service. […]
ERIE COUNTY, PA・22 HOURS AGO
YourErie

(WJET/WFXP/YourErie)– The Erie Philharmonic is set to put on their mid-season performance of Gustav Holt’s The Planets Saturday, Jan. 28 at the Warner Theater at 8 p.m. According to the Executive Director of the Erie Philharmonic, Steve Weiser, the sold out concert is the highest-sold in Erie Philharmonic history for seats in addition to individual […]
ERIE, PA・2 DAYS AGO