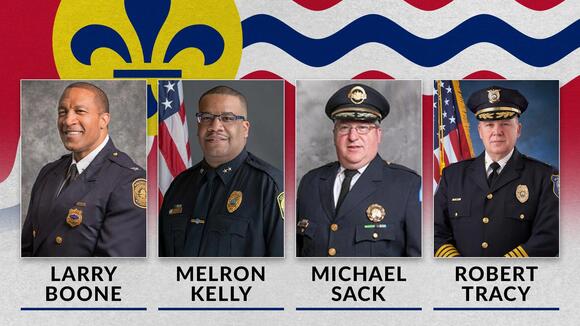 ST. LOUIS – The City of St. Louis has identified the four finalists to be the city’s next police chief.

The announcement comes a day before a town hall meeting where the public will have a chance to meet the candidates and ask questions.

“By bringing St. Louisans into the selection process, we are putting the public back in public safety,” Mayor Tishaura Jones said. “I look forward to hearing more from each of the finalists about their vision to keep St. Louis safe for our families and visitors.”

The town hall takes place at 6 p.m. at Vashon High School, located at 3035 Cass Avenue. Questions will be based on feedback submitted through the city’s website .

Both local police unions in the city, the St. Louis Police Officers Association and the Ethical Society of Police, are criticizing the process that led to the four finalists.

While we are encouraged the process is coming to an end and the officers of the SLMPD will have stability in the chief’s office, the process itself has been very confusing and has not been transparent to say the least. The SLPOA, as well as the rest of the citizens of St. Louis City and the region, would have liked to know what candidates were being considered for a chance to at least review their credentials before the list got this far.

Jay Schroeder, president of the SLPOA

ESOP’s friends in the community come to us with the same question regarding the SLMPD Chief search — where has transparency been in this process?

The chief of police greatly impacts the citizens who reside within the city as well as business owners. Why hasn’t the public been given information about the candidates before now, so they can do their own research? Why has this long process been so secretive?

The town hall is finally an opportunity for the public to be involved. We are calling on City of St. Louis residents to attend.

If you are not assisting with the solution, you are made into the excuse for the process to continue behind closed doors.

This town hall is a start, but the public needs more transparency every step of the way until the chief is selected. Let’s show them St. Louis citizens want and deserve to be involved!

Statement from the Ethical Society of Police

Police Chief John Hayden announced his retirement in September 2021. He had planned to step down in February, but because of delays in the search, Hayden had to put off leaving.

You Paid For It: East St. Louis apartment hole

A desperate tenant contacts FOX 2’s You Paid For It team to get the East St. Louis Housing Authority to finally take care of a years-long problem at her apartment.
EAST SAINT LOUIS, IL・1 HOUR AGO
FOX 2

ST. LOUIS – Homicide detectives with the St. Louis Metropolitan Police Department are investigating the shooting death of a juvenile. The shooting occurred around 7:30 p.m. Sunday in the 800 block of O’Fallon Street, located in the Columbus Square neighborhood, a few blocks north of The Dome at America’s Center.
SAINT LOUIS, MO・1 DAY AGO
FOX 2

A man was shot and killed in Ferguson Saturday evening.
FERGUSON, MO・1 DAY AGO
FOX 2

A man in Columbia, Illinois, said his dreams of opening his restaurant are shot after the requirements put forth by the city were so unclear.
COLUMBIA, IL・33 MINUTES AGO
FOX 2

A building in Festus is still standing after a fire early Monday morning.
FESTUS, MO・15 HOURS AGO
FOX 2

Nearly three months after Missourians voted to legalize marijuana, they can now buy it. Sales are already underway for those 21 and older. Missouri’s first round of recreational marijuana sales began Friday; the legalization took effect on Monday.
SAINT LOUIS, MO・2 DAYS AGO
FOX 2

Residents in Foley, Missouri, lit up social media last week with posts about police investigators searching an area near where Bianca Piper disappeared in 2005.
LINCOLN COUNTY, MO・42 MINUTES AGO
FOX 2

Two St. Louis Metropolitan police officers have been released from an area hospital after being shot in Soulard Thursday night.
SAINT LOUIS, MO・3 DAYS AGO
FOX 2

Lowe said she remembers how urgent and scary that night felt, which is probably how the families of the two officers who were shot Thursday evening felt as well.
SAINT LOUIS, MO・3 DAYS AGO
FOX 2

WEBSTER GROVES, Mo. — A threat posted to social media has put Webster Groves High School on lockout. This means that no one can enter or leave the building but classes will proceed as scheduled. The school district says that the lockout is to keep the school safe for students and staff. The school and […]
WEBSTER GROVES, MO・9 HOURS AGO
FOX 2

Victims family speaks out after fatal crash in Lincoln County

A community is in mourning after three Lincoln County High School students were killed in a crash early Sunday morning. Two others survived the wreck but are injured.
LINCOLN COUNTY, MO・5 HOURS AGO
FOX 2

A woman is behind bars after threatening harm at a St. Louis church in a text message that indicated she would make the church go "bye bye."
SAINT LOUIS, MO・3 DAYS AGO
FOX 2

The Fairview Heights Police Department is still piecing together the events of Saturday night, when they were called around 10:30 for multiple fights at a Sky Zone trampoline park.
FAIRVIEW HEIGHTS, IL・5 HOURS AGO